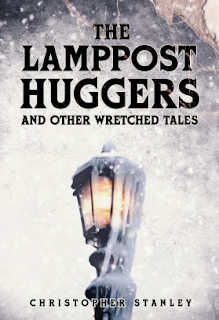 There's been much debate over whether our attention spans are getting shorter. Maybe they are, but if so they've been shrinking for a long time. Consider the difference between the relative brevity of a ghost story from - say - the 1930 and one written in the 1870s. The rise of mass education, print journalism, and later cinema and broadcast entertainment all changed our tastes and expectations. But it's fair to say that flash fiction - the publication of very short stories online - is something new. Without the internet we wouldn't have it. And, for my money, it's a good thing.

Christopher Stanley's debut collection of flash fiction shows how the genre straddles the nebulous territory between the traditional short story and free verse. If a story is extremely short, every word must count. And they do, by and large. As each story takes only a couple of minutes to read the effect is rather like a series of blackly comic sketches, with the usual proviso about hits and misses. But every story is well-written, and I suspect each reader will have their own favourites.

The stories cover some traditional horror tropes, but offers interesting twists. Thus in 'Gettysburg' there's a haunted battlefield, but it's not haunted by ghosts. 'Worry Dragons' is a new take on the monster in the basement theme, with a man desperately feeding creatures that may be the offspring of his own personality. 'Two Weeks to Wolf' offers a familiar US small-town setting, a missing child, and locals getting angry. But in the light of recent events in America the pay off is anything but lycanthropic escapism.

Other stories offer more surreal takes on what the hell may be going on in the world. The title story has a distinct whiff of the current global crisis, as people are possessed by a strange force to get out of bed, go outside, and hug the nearest lamppost. There is a nightmarish quasi-logic as to why this is happening.

Domestic bliss and why it's so bloody elusive inform serveral stories. 'Heart of Stone' focuses on the intense resentment that a father can feel for a new baby, while riffing on mineralogy. 'Wicked Collaboration' also considers babies, and what may happen when only one person senses a very ancient threat to them and their mothers. 'Little Black Holes' begins with the line 'They take our children first', and reminded me a little of a condensed Twilight Zone episode - if Serling had been far more pessimistic.

Weird science and the arcane crop up a lot. 'Another Side of Gustav Holst' is a satisfyingly clever take on the idea that the composer did write a piece entitled 'Earth' for his famous suite, The Planets. A less-than-ethical academic finds himself on the wrong end of a very strange dimensional twist in a story that has enough creative fuel for a decent novella.

Sometimes the stories don't quite live up to the titles. 'Hosiery of the Gods', for instance - how could any tale do justice to that? But by and large Stanley manages to offer effective fiction in small doses without the works becoming too repetitive. There is no feeling of a repertoire being exhausted here. While flash fiction might not be to everyone's taste, it's worth checking out. And if you want to start somewhere, this collection is a good one to explore.