I'm steadily working my way through John. L. Probert's Coffin Nails (see previous post). 'The Brook' is an interesting example of a school story - of which M.R. James' 'A School Story' is one of very good example. The late Robert Westall - a teacher by profession and of course a children's author - wrote many school stories on a supernatural theme. So how good is 'The Brook', give that this sort of thing has been done many itmes before?

It's very good. Indeed, it reminded of Westall by its economy and originality. 'The Brook' is a poem by Tennyson which a group of schoolboys are required to read, in turn, by a substitute teacher. It becomes obvious quite early on that the teacher is getting more from the readings than a keen awareness of his charges' grasp of Victorian poetic nuance.

It's not a sinister poem, incidentally. It's the one that goes:

I come from haunts of coot and hern,
I make a sudden sally
And sparkle out among the fern,
To bicker down a valley.

Not scary, of course. Tennyson was not one for the eerie or disturbing. But there's a twist, and it's rather a good one. The story is full of effective observations, especially on the subculture of schools and the odd politics of pupil-teacher relations. The ending is of a sort that difficult to pull off. It harks back to Lovecraft's 'Dagon' in a way - the narrator is faced with Something Nasty. But here JLP offers a more subtle sense of foreboding. So, two rather conventional ingredients - the school story and the 'Argh! It's coming!' ending - are handled here to good effect. Stylistically, too, 'The Brook' is on the money, with the narrative voice that of a well-educated middle-aged man harking back to his schooldays.

Oh dear, this is a wonderful opportunity to spend An Absolute Fortune. There is so much stuff here. Vampires, ghosts, stiffs, mummies, weird spooky memorabilia, and more skulls than a skull shop would reasonably stock if there'd been a sudden glut in the skull market.

It's a bit Gothic, I suspect.

I'm always stumbling across sites like this but I am not very punctilious about mentioning them. Perhaps I should do a regular 'weird spooky links' update or something? Anyway, big ups to Madame Talbot and her minions.

John L. Probert's collection Coffin Nails arrived a bit too late for a proper review in ST16, which will be off to the printer this weekend, probably. So I'll be writing a review for ST17 next year. In he meantime, I thought I'd bung in a few perceptive comments as I read my way through the book, which is a hefty collection of spooky tales.

For a start, it includes two stories I published first and therefore claim some credit for in a totally unscrupulous way. 'The Moving Image' is the one about the horrible thing in the old film. 'Guided Tour' is the one about the man who goes on, erm, a guided tour - just after his girlfriend has dumped him. You'd think the poor sod would get a break, but not. Needless to say they're both damn fine stories.

I've also perused a few other tales. John's way with words is certainly evident in 'Of Music and Mayhem', which is about a terrible musical entitled Oh, Hell! A cleaning lady who has false teeth that are too big for her calls her cat 'Thwogmoo (at least, that's what it thought its name was).' Also enjoyable is 'Nefarious Assortment', which features the sort of choccies no sensible ambassador would serve unless he wanted to spoil his guests in the wrong sense of the term.

Coffin Nails is published by Ash-Tree press. And John has other books out, oh yes. You can get a lot of them at Amazon.

It's Not Out Yet

In fact, ST16 is not even with the printer yet. Please ignore what it says at the ST web page, this is a mistake and I'm not sure what happened. It should be a 'Coming Soon' rather than an 'Out Now'. Please be patient. It's not easy, but I'm nearly there.
- September 22, 2009 No comments:

Fans of the late Seventies BBC radio comedy - all four of us - won't need to be told how good it was. The very last show had a strong Gothic-horror theme, beginning with the Lea & Perrins Lovecraft gag. Tee-hee. You can hear the BBC recording here for a few days. I love the bit where the husband lists all the rooms in the house into which his wife must not go - all 97 of them. Note that the 'Mr Different Adams' referred to at the end was the (now late) Douglas Adams, who had in fact written for the show before going on to more lucrative projects.
- September 20, 2009 No comments:

Chapter Twelvety: In which I receive a letter

Cardinal Cox, the peripatetic poet of Peterborough, has penned a fulsome missive thanking me for promoting his works on this here blogospheric communiboard. I seek no thanks - poets deserve praise because poets are ill-rewarded. (When T.S. Eliot died he was still doing two paper rounds, you know. Fact.) Anyway, amid the general niceness, the Cardinal adds the following anecdote, of interest to all aficionados of the ghostly tale. It concerns an author who was also the Big Cheese - or possibly Canon - of Peterborough.

'Also this weekend I met a little old lady who, as a young girl, went to tea with E.G. Swain; her brother was a chorister and she was the only girl to go with the choir to these teas. She especially remembered the big round table that the tea was set out on, and if you wanted something from the other side, Canon Swain would rotate the table until the desired food came round. I met her at a tour around the cemetery that I used to be poet for. She mentioned that she'd found her great-grandparents' grave in the cemetery, but that there wasa grave at the Cathedral she was looking for, but that no-one there knew where it was. I just asked whose grave, and when she said Canon Swain I drew her a map of how to find his slab. Going to let her have a spare copy of the Aquarius (I think it was) paperback edition of his tales.'

The Cardinal rightly observes that this charming anecdote is a nice news item for the blog. He also asks if I'm going to the World Horror Con in Brighton next year? The answer, I regret to say, is no. It's a bit pricey and - to be honest - I never seem to get much out of these things. I'm too shy to go around introducing myself to people, especially since ST is such a small mag.

Dear David,
Can you put this news on the blog:

I've got a 100-word story appearing on Microhorror, the place to be for flash horror fiction. It's called Wouldn't Move Out and it's about wiseguys:

Spine Chillers is a collection of short BBC radio dramas based on the ghost stories of M.R. James. Well, five of them. They were originally broadcast at Christmas, 2007, as part of Auntie Beeb's annual homage to the ghost story tradition. Now, at the time I wasn't overly impressed by these mini-dramas. They were good enough, I suppose, but I felt that - as introductions to MRJ's work - they lacked a certain something. What they have is Derek Jacobi as MRJ, doing a bit of narration at the beginning. Then each story is acted out by what is, I admit, a pretty impressive array of actors. Here's a quick summary of the contents.

'Oh Whistle...' stars Jamie Glover as Parkins and Nicholas Boulton as a very young Colonel Wilson. 'The Tractate Middoth' stars David Garrett, with John Rowe as the nasty Eldred. 'Lost Hearts' features the excellent Peter Marinker as Mr (even nastier-than-Eldred) Ashby. 'The Rose Garden', not a strong story, is given a boost by Anton Lesser as sensible George Goodman. And 'Number 13' starts Julian Rhind-Tutt as Anderson - again, he seems rather young for the part, but what the heck.

I admit that on a second hearing these are better than I remembered, but only just. The MRJ completist (hello, fellow spendthrifts) might like this collection as a bit of easy listening. But it's not the way to turn a sceptical person onto the ghost stories. The inevitable feeling is of rather rushed and perfunctory plot and character development, which does undermine the leisurely and good-humoured approach MRJ perfected early on.

Oh well. A much better buy from the Beeb is Derek Jacobi simply reading unabridged stories. The only collection available is entitled Volume 1, but Volume 2 is showing no signs of appearing as yet. The five stories on the first collection (two CDs) are 'A View from a Hill', 'A School Story', 'Rats', 'The Ash Tree', and 'The Story of a Disappearance and an Appearance'. Of these, I think only 'The Ash Tree' is a first rate effort, but Sir Derek reads them all with great aplomb and it's pleasant to hear good English prose treated well. 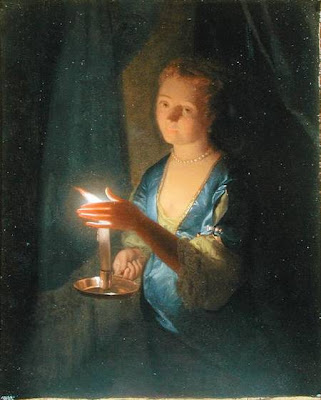 Another BBC reading of a classic ghost story. What's going on? Somebody has decided that it's autumn and therefore we all need a good scare as the nights draw in? Whatever the reason, it's all very welcome. While not my favourite Le Fanu tale - that honour has to go to 'Carmilla' - this is one of the best Victorian ghost stories of its kind.
- September 04, 2009 No comments: