Compliments of the Season... 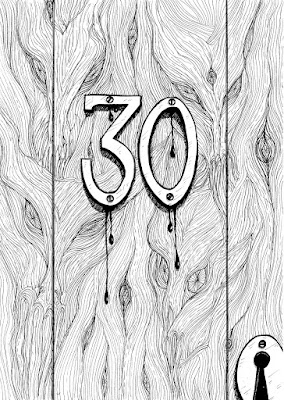 I'm experimenting with an online poll to try and boost the number of people voting for Best Story in each issue.

Look to the right of this here post and you'll see, near the top, a chance to vote for your favourite tale in #30. It was a cracker of an issue, I hope you'll agree. So why not express your opinion?


Polling closes at the end of January.

A few offerings for the festive season, to fill in time if you're at a loose end and there's nothing worth watching on the telly.

Here's the late, great Sir Michael Hordern reading the classic tale of a lost crown that should never have been unearthed.

A Ghost of Christmas Past

Over at the DeviantArt site, you can find a lot of spooky stuff. Here's a seasonal image from the artist Klaire de Lys, with a unique and - for me - compelling take on the first of the spirits that visit Ebeneezer Scrooge.

And here's another pose.

You may be wondering how this remarkable young artist has achieved the striking effect of a crown of melting candle wax without, y'know, pouring melted wax over herself. Well, there's a make-up tutorial at her website, here. Never let it be said that I don't keep up with all the trendy things. Dear me no.

Mechanical devices designed to mimic human beings or animals. It's an odd way to carry on, really, investing huge amounts of wealth and expertise in something that is seemingly useless, yet manages to be fascinating. Weird fiction has plenty of examples of strange automata - Poe wrote an expose of 'Maelzel's Chess Player', the famous Turk, Ambrose Bierce created 'Moxon's Master', and there's also Marjorie Lawrence's wonderful life-size dancer, 'Vlasto's Doll'. But in real life these clockwork simulacra can be every bit as strange as those found in fiction.

The first one I saw was at Bowes Museum, at Barnard Castle in County Durham, just a few miles from my home. It's the rather lovely silver swan - not really spooky, though certainly the stuff of fantasy. One can imagine a king or caliph in a fairy tale receiving this as a gift.

Only a very spoiled potentate would not be impressed, I feel. Now we move on to something a bit stranger. This is an extract from a TV show.

That is the sort of machine nobody in a spooky tale should be left alone with. Not for a minute. And extra points for posh, creepy voice over.

Over at the British Film Institute, they are rather keen on spooky things. They've drawn up a list of 10 Classics of British TV Horror, and it makes for an interesting read. I've seen most, but not all, of the dramas in question, and what strikes me is how diverse and interesting they are. And yet somehow they are all very distinctly British, perhaps because most have a darkly humorous take on fear, mystery, and general weirdness (hence the inclusion of The League of Gentlemen's 2000 Christmas Special). Anyway, check out the BFI list. Here are some of my favourites from it.

Nigel Kneale has two 'hits' on the list, and both are technically science fiction. Yet 'The Stone Tape' was rightly billed by the BBC as a ghost story for Christmas back in 1972, as the entire setup is pure Gothic. A vulnerable young woman goes to an old country house, where she is surrounded by men, all pursuing their own agendas, and a strange force becomes focused upon her. What Kneale brings to it is the post-Sixties British fixation on what was termed the white heat of a technological revolution. Sciencce, greed, lust, deceit, and terrible tragedy. 'The Stone Tape' has aged, and rather badly in some ways, but the core of it is still dark and powerful. It's hardly a secret that women are still treated this way, in science and elsewhere.

Then there's 'During Barty's Party', a stand-alone episode of Kneale's 1976 ITV series Beasts. This is another tale of modern, successful people confronted by a new variation on an ancient menace - the wild beast lurking in the shadows. The twist is that the not-especially-likeable couple in question only slowly come to realise that their apparently secure world - good job in the City, nice little place in the country - can fall apart in a matter of minutes. Beasts is notable that, despite its title, rarely featured actual animals due to the dearth of budget in the mid-Seventies, but Kneale  turns this to his advantage as it becomes apparent to his characters that a rather surreal migration of killer creatures is happening under their floorboards. Suburban middle-class Gothic, this, and never really bettered.

I think we might agree that J. Sheridan Le Fanu's 'Carmilla' is one of the greatest weird tales ever written, and the archetypal 'sexy vampire' story. The ending, for me, sums up the essence of the Gothic - not blood and thunder, but that most Romantic of sentiments, powerful emotion recollected in tranquillity.


It was long before the terror of recent events subsided; and to this hour the image of Carmilla returns to memory with ambiguous alternations--sometimes the playful, languid, beautiful girl; sometimes the writhing fiend I saw in the ruined church; and often from a reverie I have started, fancying I heard the light step of Carmilla at the drawing room door.


None of which quite prepares you for a version of the story in text speak, which is here. It's very silly, but strikes the right note. After all, these are teenage girls.

have we met before?haha what?I could swear I knew your facei dont think so, i never meet peoplei had a dream once, I think, as a girlwith you in itoh my god me too, i had that same dream definitely
ahh i meant to say i definitely know your face too from dreams!
crazy we had the same dream!

Strange Monuments of An Ancient Land

The land in question is my land, as it happens. Britain, of which dear old England is a large part, is an odd sort of place. In a rather tame landscape it has many monuments more ancient than those of Greece or Rome, but most of the people who live here don't known much about them. These aerial photos of Iron Age hillforts in winter give some idea of the mysteries, hidden deep in pre-historic time, that inspired many writers of weird tales. They also look good. I can imagine Arthur Machen or Algernon Blackwood hiking to the top of any of 'em, and formulating a numinous plot. Well, a plot, anyway.

In a blog article published here, Sarah Bissell discusses the long tradition of the Christmas ghost story. It focuses on books in the Special Collections at Glasgow Uni, where - as you can see - there are a lot of splendid volumes.

M.R. James inevitably gets centre stage, but there's also a mention for The Eerie Book, which is a new one on me. It looks like a fun read.


A Poe-esque atmosphere of claustrophobia and dread is also created in George W. M. Reynolds’ ‘The Iron Coffin’, extracted from his novel Faust (1847). Although his work is little-read nowadays, Reynolds was hugely popular in the mid-Victorian period, especially among the working classes. His serialised narratives borrowed heavily from Gothic novels, with their gratuitous use of violence situating them as ‘penny dreadfuls’. One of his most famous serials, The Mysteries of London, ran for four years, with its weekly instalments selling up to 50,000 copies each. ‘The Iron Coffin’, though somewhat subdued in the beginning, culminates in a thrillingly lurid conclusion that epitomises Reynolds’ style.

When you've seen one Iranian arthouse vampire Western, you've seen 'em all. Well, maybe not, but as of tonight I've definitely seen one. Ana Lily Amirpour wrote and directed (as well as playing a brief supporting role in) this remarkable film, which got quite a bit of attention when it was released a year ago. It is an unusually good modern vampire flick, not least because it shuns all but the bare bones of the lore. No sparkling here, no tedious backstory stuff, just a creature of the night with familiar appetites and the strength to fulfil them.

Sheila Vand stars as 'The Girl'. We first see her stalking the streets of Bad City, a gritty industrial conurbation. There are frequent shots of an Iranian oilfield (producing life blood of a different order), trains roar by in the night, and rich folk take party drugs while poorer junkies mainline heroin. The city's all-too familiar disparities of wealth leads to the customary infestation of crime, here represented by a brutish pimp, well-played by Dominic Rains. He is the first victim of The Girl, and his death leads to an accidental encounter between the fanged killer and Arash (Arash Marandi) a downtrodden young man trying to support his addict father.

What follows is a simple but involving plot in which problematic romance blossoms between the well-matched pair (they both like Lionel Ritchie, so clearly it was meant to be). There is some excellent cat acting by a moggy that steals every scene she(?) is in. There's even some well-judged humour; Arash's second encounter with The Girl takes place as he staggers home from a costume party, off his face and dressed as Dracula. She just happens to be going by on her skateboard while wearing the nun-like garb of conservative Iranian womanhood. The fact that these crazy kids get it together is oddly uplifting.

There are touches of the Western and the road movie about A Girl, especially in the soundtrack and the final scenes. This intelligent genre mashup deserves the praise it's received, I think. I only hope we see more horror movies this good springing up in unexpected places.