Showing posts from May, 2014
Show All

- May 31, 2014
So, here is a film I haven't watched for a while. It is a Fifties, black and white monster movie (sort of), starring Peter Cushing, scripted by Nigel Kneale, and directed by Val Guest. And, yes, it's an early Hammer Horror (sort of). I'm pleased to report that it stands up rather well, despite being obviously studio-based and short on budget.  The original version of this drama was screened by the BBC. Kneale wrote 'The Creature' as a TV play in 1955, and adapted it for the big screen. As one might expect, it is not the B-movie horror story the trailer above suggests. Indeed, though Kneale never explicitly states it, the real monster here is obviously Man. Anyway, here is a spoiler-infested synopsis. The story begins in Bray Studios Tibet, a place of many oriental extras and several small horses. Dr John Rollason (Cushing) is having fun with high-altitude botany while staying at a Tibetan lamasery. Unusually, Rollason's wife Helen (Maureen Connell) is
2 comments
Read more

Peter Cushing May 26th, 1913, Vincent Price May 27th, 1911, and Christopher Lee May 27th, 1922. Does this mean there's something in astrology?  No. Thanks to the Peter Cushing Appreciation Society for the excellent graphic.
Post a Comment
Read more

- May 27, 2014
Completely forgot to link to this interview , which appeared at the Swan River Press site when Helen's collection The Sea Change was published a while back. The interview, conducted by Jason E. Rolfe, includes this point. Some people do indeed like to be scared, and from that, much follows. Well, I’ve heard a theory that supernatural stories are all about confronting our most deep rooted fears: of death, mutilation, insanity and disease — e.g. vampire stories would represent a fear of infectious disease. I think there is some truth in that. Since ghost stories often seem to involve the settling of a grudge or retribution, I suppose they are exploring the question of whether there is any kind of ultimate justice. But basically I think you can split people up into two groups: the ones who absolutely hate to be scared, and the ones who like it! I know people who say “How can you watch films like that/read books like that?” That is one half of humanity. The other half are comparing
Post a Comment
Read more

The Dark Return of Time

I find myself in a slightly awkward position... But enough of my sordid private life. No, but seriously, it is difficult to review some books without giving away rather too much. Some people hate spoilers with a passion. I'm not one of them, oddly enough. Even if I know the key twist in a movie it doesn't bother me too much. But I am in a weird minority, I know. So I will try to review a book that has a twist without giving key plot points away and generally being an idiot. The new novel from R(ay). B. Russell is described as a 'quiet thriller', and it does indeed seem - at first - to fall squarely into the crime genre. A young man by the name of Flavian Bennett has undergone a traumatic loss. He moves to Paris to work in his father's British bookshop. It seems that working quietly among the first editions is exactly what Flavian needs. But then things starts to go awry. The shop is visited by a pretentious-seeming bibliophile, Reginald Hopper, to whom Fl
Post a Comment
Read more

The JKJ plaque was unveiled in London's famous Bloomsbury district. The unveilers, if that's a word, were comedy actors Griff Rhys Jones and Rory McGrath, who star in a TV series named after the author's most famous book, Three Men in a Boat . Which is fair enough. But Jerome was also the author of a number of rather dark short stories that put him firmly in the supernatural horror tradition. Indeed, if he'd written more in the same vein Jerome might have been known as the British Ambrose Bierce, as he had a similarly grim sense of humour. Even in his hit comic novel there is a scene in which the body of a woman - a presumed suicide - drifts by the narrator's boat. I think his best weird tale is 'The Woman of the Saeter', which I first came across in one of the famous series of Equation Chillers. You can find the full text here . It's arguably a study in madness, but the strange vampire-siren of the mountain snows is wonderfully well-realised. Sh
Post a Comment
Read more

The third issue of a magazine usually offers a decent litmus test of its likely long-term quality. Has the momentum of the first two numbers been maintained? By this standard The Green Book , from Dublin's Swan River Press, is set to be with us for a while. The standard remains very high and the contributors are still diverse and interesting a bunch. It's the 200th anniversary of the birth of J.S. Le Fanu, and the 150th of the publication of Uncle Silas, by far his best-known novel. So it's not surprising, as editor Brian J. Showers notes in his introduction, that we're in for a Le Fanu fest and no mistake. Hence the cup of green tea on the cover. However, before we get into that, let's look at some items that don't deal with old J, Sheridan. For a start, there's part three of Albert Power's almost preternaturally erudite essay (or book) entitled 'Towards an Irish Gothic'. He's just reached the early 19th century, which gives you
Post a Comment
Read more

Where do books come from?

A chip off 'Cold Plate' by Charles Wilkinson I've attached a link (in the list to the right) to images presented by John Toohey, whose site is called Seven Roads.  A page of his impressive site is dedicated to found images under the heading 'The Unsettled Dust'. Toohey also explains why he thinks his project was destined to fail, and shares his thoughts on Aickman's work. He points out that Aickman's world is black and white, something that never occurred to me. His most interesting and incisive remark, for me, is: The writers closest in spirit to Aickman are not Stephen King or H. P. Lovecraft but Graham Greene, when he wrote about London, Philip Larkin, when he described the landscape, and Patrick Hamilton, when he wrote about disillusion. Aickman may be classified as a writer of horror or supernatural tales, but he was above all, a chronicler of the English middle class. Anyway, here are some of the images, culled from various online sources, that Toohey offers.
Post a Comment
Read more 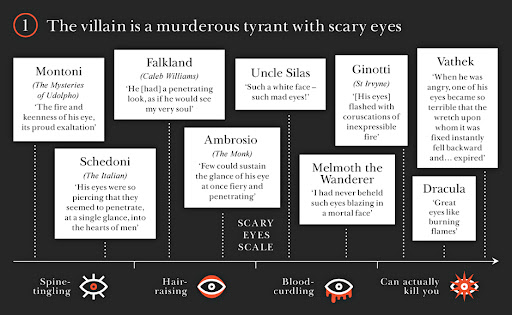 There's a fun item  at the Guardian books pages entitled 'How to tell if you're reading a Gothic novel - in pictures'. (Thanks to Helen Grant for alerting me to this.) It's a good reminder of how pervasive and plain crazy the original, 18th century Gothic novel was, and it underlines the importance of the supernatural to the genre - even when the ghost has a Scooby Do- style explanation. Anyway, here are a couple of the pictures to give you a flavour of the thing.
Post a Comment
Read more

The Teeth of Abbott Thomas

Smashwords is up to speed... 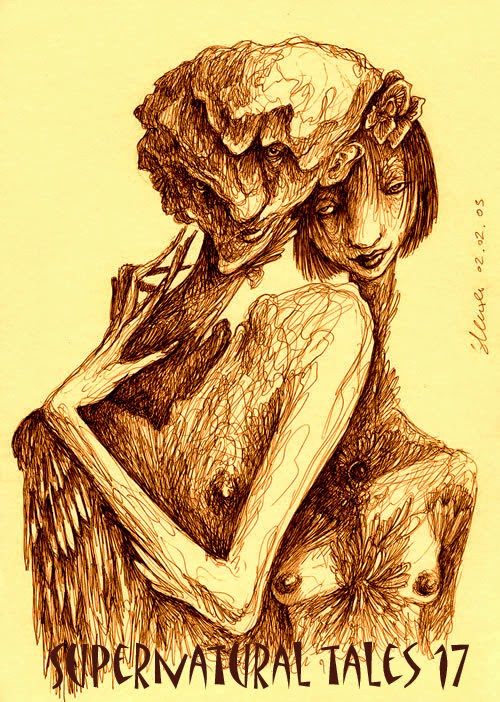 ... by which I mean that all versions of ST that are available in print-on-demand form at Lulu are also now available as ebooks. You're welcome. Here is the Stephen J. Clark cover for ST#17. Now comes the tricky part. Earlier issues of ST are out of print. People would probably like to have these as ebooks. I know I would. But I don't think I'm entitled to simply upload old stuff by authors without their permission. Getting permission will not be possible if I can't contact the authors. So I'm considering a pared-down approach for issues 1 to 16, and of course the price will be correspondingly lower. Just to add to the confusion, a couple of issues were annual i.e. each contained over a dozen stories, so there I might be able to produce bumper issues. Watch this haunted space.
Post a Comment
Read more 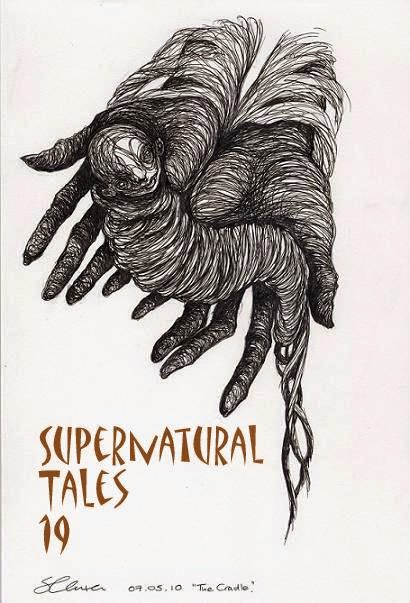 I've reached the Stephen J. Clark phase of ST's history, when his astonishing, surreal covers graced the magazine. Stephen is a gifted author and writer, whose work can be explored at the Singing Garden . Here are the two SJC covers I've uploaded to Smashwords so far.
1 comment
Read more
More posts