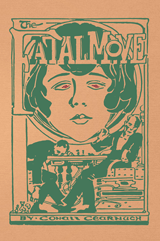 The six stories in this slim volume comprise the entire fictional output of Conall Cearnach, the pen-name of F. W. O’Connell. In an excellent introduction, Reggie Chamberlain-King describes the author as 'a peculiar Protestant divine, linguist and Irish language scholar, oddball essayist, and early national broadcaster.' O'Connell was a prolific translator and his deep knowledge of various literary traditions informed his fiction, or at least some of it.
All these stories were written during the traumatic period of Irish partition in 1921. As such they can be read both as entertaining weird tales and attempts to come to terms with contemporary anxieties in a creative way. Writing as therapy, if you like.
The title story harks back to the contes cruel of the 19th century, with its tale of two obsessive chess players who are rivals for the love of the same woman. One contrives a terrible variant on the royal game that will eliminate one of the rivals.
'The Vengeance of the Dead' is a solid excursion into more conventional territory, with again the theme of vicious rivalry proving fatal. The story, for me, is badly marred by the author's attempt to reproduce an Indian accent on the page, which has a distinct whiff of Peter Sellers about it. The central idea is good, though, and the ending works nicely enough.
'The Fiend That Walks Behind' uses the same Coleridge quote that appears in 'Casting the Runes', and also features a learned gentleman who becomes obsessed with a supernatural pursuer. However, the treatment is very different to M.R. James tale, with more emphasis on psychology. #
Slightly more playful is 'The Homing Bone', in which an anatomist commits what he thinks of as a venal sin, but finds that some spirits are very jealous of their mortal remains. This one comes close to E.F. Benson in its depiction of a solitary individual who finds himself the focus of unwanted paranormal attention.
'Professor Danvers' Disappearance' returns to the world eastern mysticism with the tale of an academic who immerses himself in Indian religion, then vanishes after receiving a death threat couched in supernatural terms. An alternative explanation is suggested, however, in a manner that reminded me of some of Chesterton's more restrained efforts.
The final story, 'The Rejuvenation of Ivan Smithovich', is a short squib about a refugee for a Soviet-controlled England where Russian has replaced English. The light tone and slightly absurd premise - a Cockney driven bonkers by monkey glands - is balanced by a reference to British attempts to suppress the Irish language. What goes around, the author seems to suggest, might well come around.
The book also contains some essays which show the breadth of Cearnachs's learning and his considerable wit. Overall, this slight book has much to recommend it to the aficionado of weird fiction, and illuminates some of the more obscure byways of Irish literature.
- September 29, 2021 1 comment:

Work is underway at our corporate HQ on the kitchen table 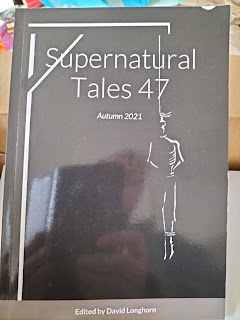 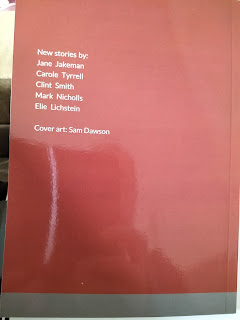 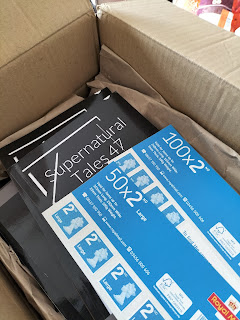 New issue available as an ezine 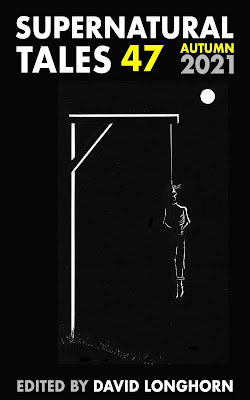 You can find it here at Lulu.
Amazon Kindle version also available here.
- September 18, 2021 No comments:

Issue 47 is out in time for Hallowe'en 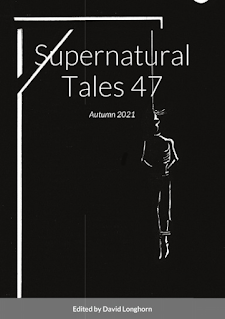 With luck I should have all copies mailed out to contributors and subscribers by the end of this month.
Go here to purchase print on demand copies. Ezines to follow soon
- September 12, 2021 No comments:

I think I've praised this movie before, but it deserves to be more widely known. It happens to be on Prime at the moment so if you have that platform, give it a try.
Static is one of those films that cleverly subverts the horror genre in a stylish, ultimately moving way. A couple, played by Sarah Shahi and Milo Ventimiglia, live in a pleasant semi-rural home, but their lives are troubled. Author Jonathan Dade has just finished his latest book but his wife, Addie, is deeply depressed. It emerges that their small son died in an accident and blame, anger, and despair might well tear their marriage apart.
This seems to be shaping up as a ghost story in which their child, Thomas, might play a role. It's listed as a horror movie, after all. But things do not proceed in a predictable way. Instead, Jonathan keeps hearing some kind of weird electronic interference - hence the title. Then, in the middle of the night, someone comes knocking at the door. The visitor turns out to be a scared young woman, Rachel (Sara Paxton) who says her car has a flat tire and she has been chased by men in gas masks. The situation is becomes even more fraught when Rachel reveals herself to be a fan of Jonathan, arousing Addie's suspicions. Jonathan cheated on her while she was pregnant.
Rachel's behaviour becomes increasingly bizarre and provocative, but then the masked men appear and cut the power. Rachel is grabbed by one of the intruders and dragged away, screaming. The Dades are suddenly besieged by faceless strangers. When Jonathan tries to contact the police he can't get through, and mobiles don't work. The intruders start to move through the house while the couple retreat and try to work out what's happening and why.
Suffice to say that, for a short movie (just 83 mins), this one manages to pack in a lot of panic and paranoia. Some reviewers didn't like, for reasons that will become obvious if you watch it. But no spoilers here. I think it offers the horror fan something different, the central performances are excellent, and it holds up well on rewatching. 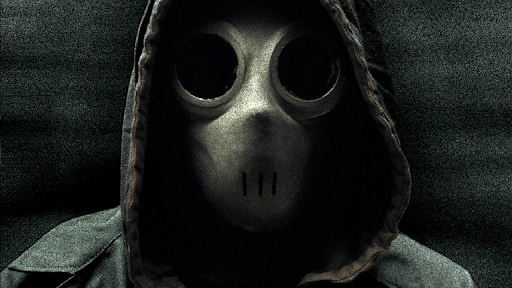 Too Near the Dead by Helen Grant 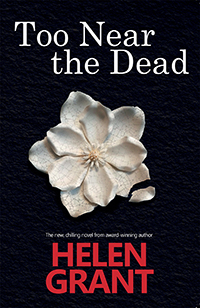 Long-term ST contributor Helen Grant made her name with young adult novels with a mystery/thriller element. Her latest novel represents a departure, in that it's aimed at a general audience. It is also her first novel that is also a ghost story, with full-on Gothic elements. Here is the blurb.

Sometimes it's terrifying, loving someone this much...For Fen Munro and her fiancé James, it is a dream come true: an escape from London to a beautiful house in the stunning Perthshire countryside. Barr Dubh house is modern, a building with no past at all. But someone walks the grounds, always dressed in lavender. Under a lichenous stone in an abandoned graveyard, a hideous secret lies buried. And at night, Fen is tormented by horrifying dreams. Someone wants Fen's happiness, and nothing is going to stop them—not even death...

The first chapter sets down a marker for horror. Fen wakes up not in bed with her beloved James, but interred in a coffin wearing an antiquated wedding dress. Fen has her own demons, the result of an unhappy childhood marred by death and loneliness. She rebels against her oppressive parents, gets a job in publishing, and meets exciting new author James. Much to her own surprise they fall in love and buy a house in a part of Scotland the author brings to live with ease (no doubt in part because she lives there).

But of course, the house is haunted. We know from the start, because this is a Gothic novel and Fen is the beautiful, troubled heroine. However, it's also a modern novel and Fen is not just some panicky idiot flitting around in a nightie going 'Eek!' She tries to handle the problem. Admittedly her first attempt is to ignore it, but that's grown-up problem handling in my book. When it doesn't work in this book, Fen starts to try and find out more about the house that stood on the site of her new home, and uncovers a grimly convincing Victorian tale that nods to Dickens and Le Fanu, not to mention Poe.

No spoilers here. Suffice to say that virtue prevails, more or less, and true love finds a way. But the perils of Fen and the way in which she ultimately faces them makes for an absorbing read. This is a very satisfying ghost story by an author who not only knows the genre inside out, but truly loves it.

Roger Corman's place in the history of cinema is assured by his prodigious output of low-budget genre films. He jumped on the horror ban...