Showing posts from January, 2014
Show All

- January 27, 2014
... and there's also at least one lang-legged beastie, plus more than a few bumps in the night. Phantasm Press, as I mentioned earlier , has been set up under the aegis of genre editor extraordinary Richard Dalby. This may, for aught I know, be because projects Richard had in mind for another publisher were put on permanent hold. Whatever the reason, though, it's a good move, and the first book from PP is certainly an enjoyable read. As always, there's an interesting foreword that tells us a little about the author. The key point about the Francis C. Prevot's stories in Ghosties and Ghoulies is that they are very short. A bit of rudimentary arithmetic leads me to believe that the magazine in which they appeared - Brighter London , sounds ghastly - imposed a thousand word limit. This is very short indeed for a ghost story, or any kind of story. It's a tribute to Prevot's skill that few are outright duds, and some are very good. Within the drastic limitations
2 comments
Read more 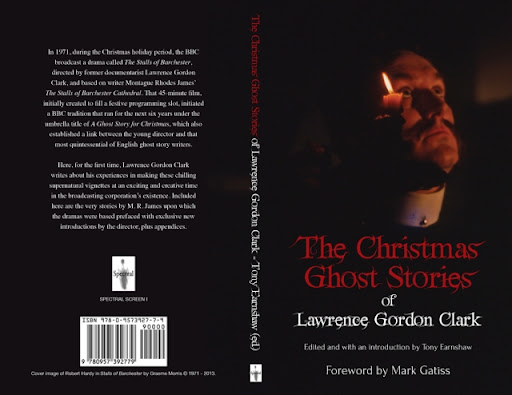 I have vague, somewhat confused memories of watching the BBC's ghost stories for Christmas. Back in the Seventies I was just old enough to watch them, but perhaps not old enough to appreciate them. I had no idea who M.R. James was (shocking, I know). It was only later that I came to the original stories and began to retrospectively grasp what it was I'd been watching, with a certain thrilled bafflement, about ten years earlier. Spectral Press have produced a volume that would have been very valuable to my younger, spottier self. In it are all the M.R. James stories that were directed by Lawrence Gordon Clark, plus one that he would have liked to attempt. Seeing them listed on the contents page makes you appreciate just how well-served ghost story fans were. In his foreword Mark Gatiss points out that Clark, originally a documentary film maker, brought a 'stillness, a weird beauty, and a rather brilliant management of the ghostly shocks' to adaptations that have yet
4 comments
Read more

- January 20, 2014
Sneaking up on me, somewhat, is another small press publisher of vintage supernatural fiction. Rather excitingly, Phantasm Press is the brainchild of legendary editor Richard Dalby, an unrivalled expert on the ghost story. The first book from this new imprint is Ghosties & Ghoulies by F.C. Prevot. (The link takes you to Amazon UK - Phantasm does not seem to have a website as yet.) According to the blurbette: Francis C.Prevot's very rare collection of twenty-one short supernatural horror tales and vignettes, GHOSTIES AND GHOULIES, is here reprinted for the first time exactly ninety years since its original publication, together with all the pictorial and decorative headpieces by A.Wyndham Payne. If anyone has any more information on Phantasm Press I'd be happy to share it. Or just put it into the comments section on this post.
Post a Comment
Read more

- January 15, 2014
A new publisher of supernatural fiction is always interesting, and this one looks intriguing. OLDSTYLE TALES PRESS is an independent literary press which publishes edited anthologies of classic ghost stories, tales of the supernatural, horror novels, and Weird fiction, circa 1767-1939. Editions feature original illustrations, annotations, and introductory notes on each story or chapter. FOUNDED in 2013, Oldstyle Tales Press is committed to producing affordable editions of the best supernatural, weird, and horror fiction produced in the English-speaking world before World War Two. While most anthologies and editions of horror fiction are either entirely lacking (or notably sparse) in their critical material or designed for professional use by literary scholars, Oldstyle Press strives to offer quality editions with informative-but-accessible critical material, an attractive horror aesthetic, and a guided narrative structure at an affordable price designed to attract and encoura
Post a Comment
Read more

The Cranes That Build the Cranes

Jeremy Dyson is best known as one of the comedy team The League of Gentlemen, who some produced brilliant radio and TV series. He is also co-writer of the dark comedy Psychoville* . Dyson is somewhat less well-known as an author, but he has short story collections and a novel, What Happens Now, under his belt.  The Cranes That Build the Cranes  (2009) is his second collection, and the reviews quoted on the cover liken the contents to the work of Saki, Iain McEwen, and Roald Dahl. That's an interesting range of heavy hitters, and gives some idea of the darkness and intelligence to be found within. Of the nine stories, all might be termed weird tales, and most have an element of the supernatural. I found it an uneven collection, but readable and remarkably varied, despite a marked absence of cranes. For instance, the traditional ghost story, 'Out of Bounds', does indeed belong to the Dahl tradition of the nasty twist. But one might also point out that it's the sor
1 comment
Read more

- January 09, 2014
A couple of posts down it's been pointed out that there aren't that many ghost stories focusing on four-poster beds. In fact, the only classic weird tale that's definitely bed-based is 'A Terribly Strange Bed' by Wilkie Collins. So here's an old-time radio version from a series that ran from 1943-45.
Post a Comment
Read more 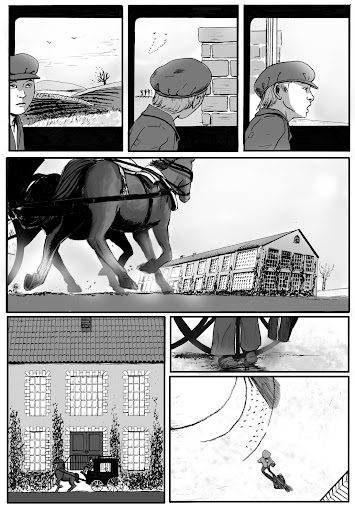 Well, how does one go about introducing the young people of today to classic ghost stories? One way might be to offer them in the form of graphic novels, or comic strips as old folk like me tend to think of them. There's an excellent adaptation of an M.R. James story, 'Lost Hearts', to be found here . It's a bit tweaked and simplified, but the essential horror remains. Below you can see the first page, when Elliott (as the boy is called i.e. not Stephen) arrives at the home of 'Professor Abney'.
Post a Comment
Read more

A few regular news items contain something pertaining to the supernatural tale. Sometimes I search the BBC site for 'ghost' and almost invariably come across a weird little aside or reference. Today's is a cracker . VisitBritain, the slightly annoyingly-named body responsible for promoting tourism in my fair homeland, has drawn up a list of Dos and Don'ts for hoteliers. And yes, with Germans it is indeed 'Don't mention the unfortunate events of the first half of the 20th century'. But perhaps the weirdest and most charming bit of advice is not to put people from Hong Kong in four-poster beds, because they associate them with 'ghostly encounters'. The obvious question is, Why Hong Kong? Four-posters feature in any number of ghost stories; horror movies are chock-a-block with them. We all know they're a bit spooky. But they are also lovely period items of furniture. It occurred to me that perhaps four-posters are uniquely Western, so that nob
3 comments
Read more

When a successful author dies, there are widespread tributes. Elizabeth Jane Howard (1923-2014) was undeniably successful thanks to her many mainstream literary novels, notably the the series that became the Cazalet Chronicles. Howard's short stories are, of course, a relatively minor part of her total output. But it's worth noting that it was as a collaborator with Robert Aickman in the collection We Are For the Dark that her work first saw print. The complex relationship between Aickman and Howard, while interesting, is of debatable significance when considering either's work. But I can't help feeling the often disastrous interaction between Aickman's male characters and beautiful women must owe something to his affair with the undeniably beautiful Elizabeth. It's also at least possible that - given Aickman's propensity for basing his stories on dreams - a few of his characters are Howard-like. By this I mean they are 'well-bred' girls, the
Post a Comment
Read more

- January 04, 2014
Happy New Year! Somewhat belated, I know, but it's the thought that counts. It occurred to me that I haven't mentioned (or at least, I can't recall mentioning) ST's presence on Facebook. Supernatural Tales has a Facebook page . Sometimes interesting things appear on it. If you are a Facebooker, why not mosey along and join? It's all very informal. In other news, just over one hundred years ago, Ambrose Bierce vanished in Mexico. I suspect we've seen the last of him.
Post a Comment
Read more
More posts