Clearance - everything must go

I've had enough of these boxes cluttering the living room. They make it impossible for me to clutter the living room up with more books and DVDs. So I'm getting rid of back issues of ST. Hardly anyone ever wants to purchase a back issue so...

1. If you're an ST author and want some more free copies of the one with your story in it, let me know and I'll send you a couple of issues - just pay the postage.

2. If you're a dealer in obscure magazines, see 1. above.

Most of them are going to be recycled. I'll just keep a couple of copies of each issue.


UPDATE ST10, ST16 and ST19 are now officially SOLD OUT. That means that anyone who wants a copy of ST19 - as a booklet or download - can still go to Lulu. It might actually be cheaper for anyone in North  America looking for any issue from ST17. Unfortunately ST16 and earlier issues are not on Lulu.
- April 28, 2012 7 comments:

Ghost Stories for Christmas on DVD

So, the British Film Institute has pulled its finger out and is releasing some of the classic seasonal dramas of the Seventies.


The first two volumes will be released in August 2012 in celebration of the 150th anniversary of M.R. James's birth. Two more volumes will follow in September, while the fifth and final volume, as well as a complete Ghost Stories for Christmas box set, will follow in October.
Volume One includes two versions of the chilling Whistle And I'll Come To You: Jonathan Miller's 1968 adaptation, starring Michael Hordern, and the 2010 re-imagining, starring John Hurt.
Volume Two includes The Stalls of Barchester (1971), starring Robin Hardy, and A Warning to the Curious (1972), starring Peter Vaughan, as well as Christopher Lee's Ghost Stories for Christmas: The Stalls of Barchester (2000).

Yes, fans of Robert Hardy, they got his name wrong. Let's hope they handle the DVD release a bit more competently. And frankly I can do without the inferior 2010 'adaptation', John Hurt notwithstanding. Still, it's good news.

If you can watch a very old, cut down for TV version that was uploaded from VHS, you might enjoy this. It betrays its origin as a stage play, and is very much a two-hander, with good performances from Hemmings and Hunnicut. But while most of the movie is okay, the last ten minutes or so take it to a new level and make it a genuinely effective ghost story. And yes, perhaps it was intended to cash in on Don't Look Now, but it takes a very different direction.
- April 25, 2012 3 comments:

Not for the first time, BBC Radio 4 Extra is running five 30 min readings of stories by the revered (if enigmatic) Walter de la Mare. Among the readers are Richard E. Grant ('All Hallows') and Kenneth Cranham ('Crewe'), The series is here:

ST Covers that never were...

I never quite screwed up the courage to try these fractal patterns. Some are a bit rubbish, but others I really liked. Oh well. 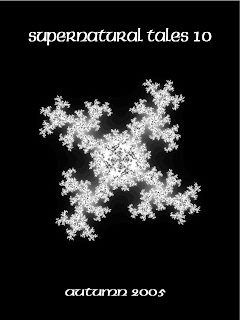 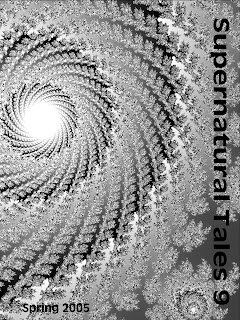 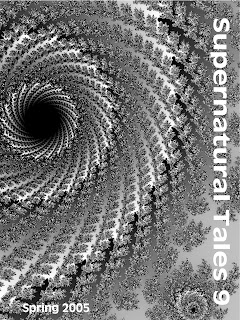 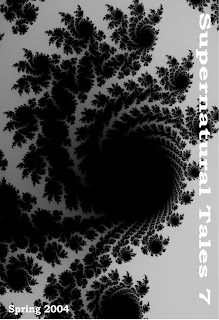 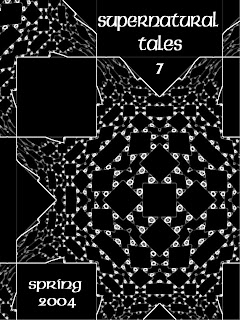 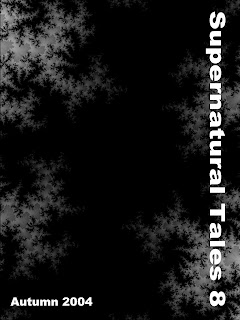 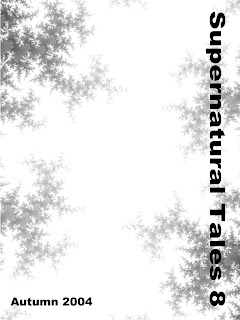 
Sometimes surfing the internet can be productive, especially if venture into YouTube land and type in the names of a few famous ghost stories. I had never heard of this 1983 Granada TV anthology series. Sadly, it only seems to be available as a Region 1 (North American) DVD. But if you are suffering from Region 2 syndrome you could still play it on a PC if you don't have a multi-region player. And there's always YouTube (hint, hint).

Shades of Darkness was a fairly high-concept series for Granada– it's hard to see British commercial television trying anything like it today. The DVD consists of seven stand-alone dramas, each running to just around 50 minutes to fill an hour-long slot with one commercial break. The Internet Movie Database describes Shades... as 'an anthology of short mysterious dramas, each with a supernatural twist'. But the imdb offers a little mystery in itself, because while the DVD has seven stories, the series as televised consisted of nine, divided into two seasons, the second of which consisted of just two programmes broadcast in 1986. Very odd.

The two 'missing' stories are 'Seaton's Aunt' by Walter de la Mare, and 'The Last Séance' by Agatha Christie. I assume that these stories couldn't be released on DVD for copyright reasons. Even more confusingly, while the series was made in 1983 two episodes – the Christie and 'The Demon Lover', an Elizabeth Bowen story – were screened in 1986.

Enough of the vagaries of Eighties ITV scheduling – what's the series like? Well, what we have here are variably faithful adaptations of some classic tales, plus a few that are rather obscure. I certainly don't recall reading 'The Maze', by C.H.B. Kitchin. But the dramatisation, scripted by Ken Taylor, is rather good. Francesca Annis and James Bolam are excellent in the lead roles of a mismatched couple with an imaginative little daughter who enjoys playing in the old, run-down maze of their country home. With skill and economy we learn that this if in fact the wife's family home, where she grew up. And, one day in the maze, she underwent a childish 'marriage' to a gardener's boy. As young adults she and the gardener (played by the excellent Duncan Preston) enjoyed an affair of sorts, one cut short by his untimely death. Has he returned to the maze? And if so, what for?

'The Maze' is one of the most successful adaptations of the series, but is marred by an intrusive musical score. I could just about bear the usual horror movie 'make you jump' stuff. But sadly, Shades... is plagued by something far worse – a pretentious pseudo-classical soundtrack that is presumably supposed to point up the serious, 'literary' nature of the entertainment but instead simply destroys the mood. It's far worse in some stories than in others, but it grates in all of them.

Bram Stoker died on 20th April, 1912. To mark the centenary of his becoming undead (chortle) Radio 4 Extra is broadcasting readings of five of his stories. Two are familiar to me - 'The Squaw' and 'The Secret of the Growing Gold'. Three other stories I don't know - they are 'The Coming of Abel Behenna', 'The Dream In the Dead House', and 'A Dream of Red Hands'. He liked his dreams, obviously. Anyway, the reader is Dyfed Thomas, who's rather good at the old Celtic spookery.

Stoker was a prolific writer, but will inevitably be remembered for Dracula - not least in a thousand of next week's pub quizzes, I daresay. Is it a good thing for a writer to be known only for one of his/her many books? Well, given that most writers are simply not known to the general public for anything, I'd say Stoker was a winner. To have created a story that has that instant recognition factor over 100 years later is a remarkable achievement. While Stoker was not renowned for his brilliant prose style, many a more elegant and thoughtful writer of his day is now forgotten, their finest novels or short stories less than footnotes in literary history.

Anyway, I'll be raising a glass of something suitably red and sticky to Bram Stoker next Friday. Yes, he was a 'one hit wonder', but it's given to few to have even that one hit. By a combination of luck and skill he caught something of the essence of his time, which made Dracula a bestseller, but also created something timeless in its appeal. And if Stoker's vampire count was created from second- or third-hand materials, well, most fictional characters are. And perhaps it's apt that the origins of Dracula lie amid little-known volumes on Victorian library shelves, as he was a creature of dust and shadows.

Shades Of Darkness: The Intercessor

One of the six-part series from the Seventies. In some cases these are marred by bad (i.e. intrusive) music, but they are rather faithful renditions of some distinguished supernatural tales. Others include Wharton's 'Afterward' and Hartley's 'Feet Foremost'.
- April 09, 2012 3 comments:

As I'm always banging on about M.R. James (albeit quite justifiably), here's something different. This seems to be the pilot of a series that never took off, which is a pity. This is a well-cast - if fairly low-budget - and refreshingly concise as well as faithful adaptation of E.F. Benson's much-anthologised tale of spooky doings in sleepy English village.
- April 04, 2012 No comments:

Things are cheaper on the internet. In the case of ST21, by going to the link below you can get a fairly cheap print-on-demand copy of the magazine or a free download for your e-reader.