S.P. Miskowski, who's story 'A.G.A.' appeared in ST#21, has published a new novella. It's one of three linked to her debut novel Knock Knock, but can be read as a stand-alone tale. I think it's rather good and my Amazon review (and of course the book itself) is here.

So, J.K. Rowling has a new book out. As someone who hasn't read a single page of Harry Potter's long and - to millions of people - inspiring adventures, I'm not wildly excited and probably won't read it. But I can grasp that a popular writer changing direction and producing a book that's definitely not for younger children (but which teens will probably read) is news.

Rowling is left-liberal in her politics, which explains why the right-wing press - almost a tautology, nowadays - has gone after her. Much of the negative coverage about her manner at interviews seems sexist. All I heard in a BBC radio interview this week was an intelligent woman talking in a way that, in a male author, would have been described as forthright, trenchant, or confident.

Regardless of how Rowling talks to hacks (many of whom are not especially likeable or trustworthy people, I feel) it's worth remembering that, unlike most rich authors, she has put her huge fortune to charitable use. And here's something that someone tweeted at me (and a few thousand others). 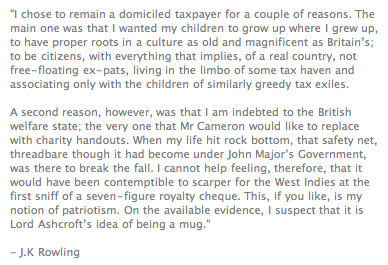 "..& you have achieved a net worth of £560 million, often from the pocket and birthday money of children.."

But the implication is clear enough - that when an author achieves stellar success it is somehow morally wrong to keep making more money. Beyond a certain point (A million pounds in the bank? Ten million?) writers should stop charging and give the stuff away free - that, I think, is the implication of the crack.

Nobody expressed the same opinion with regard to the late Steve Jobs - that the cost of an iPad could have been reduced, as Mr Jobs was rich enough to sell them at cost without feeling it. Absurd, isn't it? Steve Jobs was a real businessman in the real world - one who made a healthy profit for his shareholders, employed lots of people, and accumulated great wealth for himself, right down the line. By contrast, most professional writers don't get paid more than a few thousand a year, and they tend to have a 'real' job to get by.

A lucky few, like Rowling, achieve what the world calls great success. Most writers never do. And it's all a bit of a lottery, because everyone can think of at least one author - living or dead - who deserves greater recognition. And that's part of the problem, too - success being a matter of luck as much as skill. Because another game the media, with public connivance, like to play is The Undeserving Lottery Winner.

Anyway, here's a nice, thoughtful item about Rowling's new book, which points out that she's done some good for people with a real but often trivialised condition.
- September 28, 2012 4 comments:

Over at the YouTube car you can hear an old, reasonable-quality vinyl recording of 'The Hound' by Mr McDowall. He had a pretty impressive career in horror and science fiction, from appearances in The Twilight Zone to Planet of the Apes by way of The Legend of Hell House. Anyway, I think he does a very good job on one of HPL's more over-the-top stories.
- September 27, 2012 No comments:

Yes, there's a spiffing map of Monty's World. Using it as a Google Maps thingy, you can explore real places he refers to in his stories, places that helped inspire locations, and of course places that were simply significant in MRJ's life. Jolly good show. Well done to all concerned.

Contributors' copies of the latest issue are on their way - indeed, some have already arrived, which is a wonder. Overseas subscription mail-out comes next, followed - in about a week's time - by UK subscribers' copies.

Anyone want to buy a tee-shirt with a horror story on it? You're in luck, then, because Tyneside's very own Stone Franks has written just such a story and it's here. And well done to her for coming up with the idea.

So, I received this review copy of Zombie Apocalypse! Fightback from Robinson (the publisher, not the Crusoe). The book is a 'mosaic novel', with a narrative arc adorned by the work of many talented hands.

It's a sequel to Zombie Apocalypse! and, like the first book, edited by Stephen Jones, which is why I've got it. Robinson sends me the Best New Horror anthology every year, while I send Stephen Jones copies of ST.

So far so good. The problem is, I can't be doing with zombie stuff. I find it about as compelling as sparky vampires, i.e. not at all. I can't get into it, and while I'm impressed by the array of good writers marshalled for this book (among them Reggie Oliver, Simon Strantzas, Paul Finch, and John L. Probert) my jaundiced view of the walking dead ain't gonna change. I may not know much about reanimated corpses that chew people's faces off, but I know what I don't like.

And it's a pity, because skimming through ZA!F I find some really nice notions, not least references to Hobbs End and some interesting historical pastiche. It's a well-produced book and may well be pop-lit catnip to zombie lovers the world over.

Now, the obvious way to deal with a review you don't wanna do is find some other literary luminary who's willing to have a go. But, though I number many writers, editors and reviewers among my Facebook friends, none of them wanted this particular gig.

So, what's an ethical-ish editor to do? I can't not mention it, but I can't give a vague-but-glowing endorsement to it. So instead, pop over to Amazon UK and check out the reviews of the first book, then make up your own mind. As one does.
- September 22, 2012 4 comments:

Hello, folks. Sorry I've been away for a bit. The news is that I'll soon be sending out contributors' copies and review copies of the latest issue. By the end of next week I should have despatched all the overseas subscribers' copies. And by the week after that - well ahead of Hallowe'en - UK readers' copies will be on their merry way.

In other news, check out the YouTube bar if you want to hear Vincent Price reading Edgar Allan Poe.
- September 21, 2012 No comments:

Well, my return home, to be specific. I have been away to a. Cambridge, staying at St John's College courtesy of the wonderful Dr Mark Nicholls, who is Head Librarian there, and then b. Dorchester, staying at a hotel with dodgy plumbing. The Cambridge Expedition was Black Pilgrimage for A Ghostly Company, which is basically a group of people who go to pubs and restaurants on the vague pretext of discussing ghost stories. And Cambridge 2012 was, of course, the pilgrimage in honour of M.R. James (born 1862).

Here is a picture of the Companions at a quaint rural hostelry, having had a nice Sunday lunch. 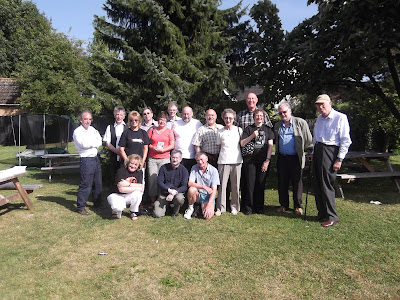 The picture includes several ST writers, including: far left, Peter Bell; back row, sixth from right, Mark Nicholls; third from right, Kate Haynes; centre in check shirt, Antonio Monteiro; centre front, Bill Read (for whom many thanks for the picture, which was taken with Bill's camera by a helpful passerby). Also pictured at front left is Loretta Nikolic, an artist who produces rather nice ghostly greetings cards. She was about to launch into a car-boot type sale of her wares at this point - I bought quite a few. Your humble editor is in the frame - back row, fourth from left, in the cool shades.

'How Love Came to Professor Guildea'

'There's a smile on my face' - as my head rotates 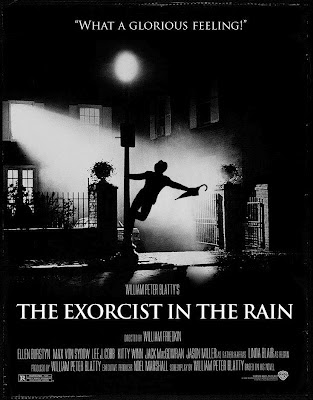