As I've mentioned before (where were you? Well, you should rub something on it), this is the 200th anniversary of Edgar Allan Poe being born into our veil of tears, from which he departed a bit sharpish after writing some spiffing stories, some cracking poems, a brilliant bit of mystic cosmology, and a sort of novel.

Now, there's this Japanese bloke, Taro Hirai, who took the name 'Edogawa Rampo' because it was as near as he could get to Edgar Allan Poe. Rampo was one of Japan's premier writers of detective fiction. Indeed, reading the only selection of his work I could find, it's clear that the side of Poe that influenced him most was the weird, psychological story. Rampo's work is very strange, but not actually supernatural. His stories tend to focus on the bizarre, improbable and downright loopy. Thus in 'The Hell of Mirrors', a man obsessed with his own reflection ends up inside a kind of giant mirrorball, which is not good for him. 'The Caterpillar' is about the wife of a hideously crippled war hero who torments and eventually mutilates him even more horribly. 'The Twins' is the story of a man who murders and then takes on the identity of his twin brother. And in 'The Cliff' a man and wife discuss the conspiracy that led to the death of her first husband, and reach a surprising conclusion.

The one thing Rampo doesn't seem to have written is supernatural fiction, oddly enough. This is all the more surprising when you consider Japan's rich history of myth, folktale and ghost story. But perhaps the fashion of the time led Rampo to explore other avenues - a love of 'tales of mystery and imagination' does not, after all, confine an author to the ghostly or mystical.

Only a handful of Rampo's stories and two of his short detective novels seem to be available in English translation. There is also the film Horrors of Malformed Men, which is a surreal portmanteau production, cramming in a dozen or more Rampo tales, often drastically modified. I think it was banned for a while because some scenes are a tad naughty.

So, there you have it. Another writer you might care to try. Personally I think Rampo is rather good, and the improbability of his plots is far outweighed by the cool, elegant skill with which he executes them.

The Fall of the House of Usher

It's on ze wireless zis week. BBC Radio 7 has at least done its share of Poe pushing to mark the poor chap's bicentenary. Nobody else seems to have paid much attention. Poe may be a minor writer, but when I was a young chap it seemed that virtually every literary anniversary got a right old hoohah in the media. Post-literate culture? Maybe.

Ah well, here's a bit of fun from not one, but two admirers of Edgar.

The Creator of M. Valdemar

Edgar Allan Poe is 200 years not entirely alive! I once stayed in his house in Scotland, y'know. Well, a house in Scotland where he lived for a bit. Anyway, BBC Radio 7 is having a bit of a Poe-fest, and three stories can be listened to online. The stories are 'The Pit and the Pendulum', 'The Tell-Tale Heart', and 'The Gold Bug'. The third story is not of course remotely supernatural, but it is a very good dramatisation, giving the tale a good twist.

At this moment I'm listening to a play about Poe's life, starring John Moffatt and Kerry Shale. Yes, listening and typing at the same time - versatile Valdemar. The play by Christopher Cook dates from 1988. Shale stars as Poe, with Moffatt as Dupin, Poe's fictional detective who attempts a 'real' inquiry into the author's life - and death.

Interesting news item here, about the battle to 'own' Poe for tourism. He lived in several places, the cunning devil, and so various bits of the USA are vying for the morbid tourist dollar.

The Wonderful World of Whitby!

I must go down to Whitby again, to the wonderful sea and sky,

And have some some chips and a pie.

Anyway, my friend Dr Gail-Nina Anderson has a lovely piece on her site that is very probably endorsed by the Whitby tourist people. I wonder what would happen if she, to coin a phrase, went behind the scenes at the museum?

And was there ever a Goth skiffle group called the Whitby Jets?

We need something to cheer us up. Well, I do, as I'm fed up after my first week back at work. So, classic humour which is not at all supernatural, merely super: 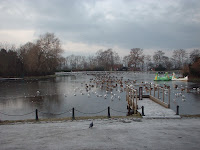 The frozen pond in Saltwell Park. I felt sorry for the gulls, thieving noisy buggers though they are. Note the swan boats locked in the ice in true Shackletonian fashion. Gosh, it was chilly as I trudged through on my way to my nearest Post Office (estimated distance 4.5 Belgian furlongs) to post a parcel. To whom? To Jim Rockhill of Dowagiac, MI (look it up), as he had ordered the last two editions of ST and one of my last copies of A Game of Ghosts. Yes, AGOG is damn near sold out. Which makes it a publishing triumph, I suppose. Anyway, nice to think of Mike Chislett's stories nestling together in single volumes on shelves around the world.

All in all, the eighth Phantoms at the Phil event was an enjoyable evening of traditional entertainment. There were no shudders of horror, but many a thrill of appreciation and a fair few outright guffaws (in the right places). What more can a fan of supernatural fiction ask for? Apart from a free drink and a piece of shortcake, of course, and these too I was plied with. What more could a wanderer on such a wild night hope for? Oh, a lift home. Thanks Mike.
- January 06, 2009 3 comments: 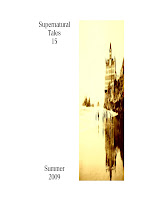 It's another pic, somewhat photoshopulated, provided by that nice man Tony Lovell.