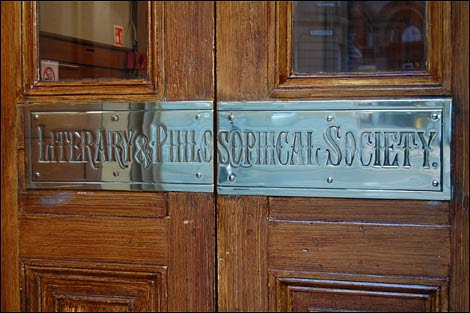 All in all, the eighth Phantoms at the Phil event was an enjoyable evening of traditional entertainment. There were no shudders of horror, but many a thrill of appreciation and a fair few outright guffaws (in the right places). What more can a fan of supernatural fiction ask for? Apart from a free drink and a piece of shortcake, of course, and these too I was plied with. What more could a wanderer on such a wild night hope for? Oh, a lift home. Thanks Mike.
- January 06, 2009

Hi Valdemar (Dave) - Edwin here. The Borders have some really horrible spooky things - here are some:


Wulvers and Hugboys
..and Trows, Redcaps, Dunters and Powries. Apart from fairies under the hill and water horses and kelpies in the water, there are some really awful things lurking in the Scottish woods, fields and hills. The Hugboy (see Maeshowe, Scotland: Land and People) is a scary spirit native to Orkney which lives in old burial mounds - they sometimes share their neighbourhoods with Trows, ie trolls which live in mounds called ‘Trowie Knowes’. Trows are nasty, brutish and short, and are also found on Shetland. A trow called ‘Nikademius’ lives on ‘Da Sneck o da Smallie’ on the Shetland isle of Foula: don’t visit him at night. The Wulver is a Shetland werewolf variant. They don’t seem to shift form: the permanent form is a man’s body and a wolf’s head. Wulvers spend a lot of time fishing and have occasionally been described as benevolent, leaving fish for poor families.
Redcaps are Border beings, also called Dunters and Powries, which may be localised variants of redcaps. They are all horrible and can outrun you. They have sharp claws and get their name because they want to dip their hats in your blood. f you meet one your only hope is to chant bits of the Bible at it, and tis teeth will fall out. Dunters are particularly associated with castles, and may be guardian spirits (read MR James), or possibly the souls of humans sacrificed at the foundation. Sir Michael Soulis (see above) was accompanied by a redcap called Robin.

Blimey, that's a lot. I suppose what it proves is that, in ye olden days, people were rooted in a particular area (well, 'the common people' anyway) and invented a whole supernatural world that was intensely local. But these local spooks tended to fade (or bleed) into one another.

Thanks for the list. When I was a lad we used to holiday in Scotland every year. The only eerie experience I had was simply standing by Loch Ness. A very spooky place.

Actually i think there is little to touch the Geordie Cauld lad!

The border redcaps seem the worst of the lot. The Shetland wulvers seem uniquely benevelent but I'd give them all a wide berth.