It's customary for fans of ghost stories to lament how few there are being made for broadcast. However, I sometimes wonder whether people who have no real knowledge of the genre, or interest in it, should simply not touch it.

A case in point is the BBC 7 series of 30-minute dramas, Beyond the Grave. These are supposedly based upon 'real life' ghost stories - the first one concerns the house in Berkeley Square, as mentioned by M.R. James in 'A School Story'. Perhaps that's the problem - true life ghost stories are usually anecdotes of no great significance.

What's depressing about these stories is how hackneyed they seem. Over-acting is the order of the day. They're a lot like a wireless version of the early Seventies series Thriller. In two out of five plays, the plot is essentially the same! A priest/minister who wants a quiet life comes to a village where, in a surprise-free twist, pagan forces are at work. The second of these, 'Middlewitch', is almost an object lesson is lazy radio drama. It would nice if the inhabitants of a close-knit Welsh community could speak in the same accent...

It's ironic that the best treatment of the 'secret pagans' plot has no supernatural elements, but does have a lot of singing and nudity. And Edward Woodward.

I'm struggling personfully with the last touches to ST14, which should be ready for the printer sometime before the ice caps melt. In the meantime, I'm posting a Spanish pop song about H.P. Lovecraft, because a. I'm sure he'd approve, b. there are no Belgian pop songs about Arthur Machen, despite all we did for them in two worlds wars, and c. it's all rather jolly in a Europop synthy sort of way.

... sounds like the punchline to an off-colour joke about an actress and a bishop. But no! The Cardinal is in fact a poet of Peterborough, whose reputation precedes him wherever he goes - at least in the Peterborough area. He's been writing little booklets of poems for many a year, and has also produced some interesting fiction. I seem to recall he won a competition run by the erudite Friends of Arthur Machen some years ago.

Anyway, Cardinal Cox has sent me his latest emanation. Entitled 'The Rock Show: The Devil's Own Music'. it is a pamphlet of poems inspired by blues and rock. It was written for Zombiecon, which is to be held in Walsall. Insert your joke about that here_______

Here's a sample of the first poem, 'Fugue on Themes by Robert Johnson'.

I been studyin' the rain

I believe I ain't gonna see you again

See, it even rhymes and scans! Traditional poetry that's actually about something, our Enid! I like the Cardinal's versifying ways and am happy to recommend his work to you, yes you, stop sniggering. If you want your poetry to make a deal with the devil at the crossroads, to be redolent of Sir Philip Sidney's juicier flights of fancy, to recall the wry humanity of Louis Macneice, and to not remind you of bloody Wordsworth in any way, this is for you.

But how do we buy this miniature masterpiece? Well might you ask. To order a copy you need only do the following:

Send a one pound coin, carefully disguised, and a stamped, self-addressed C5 envelope to: 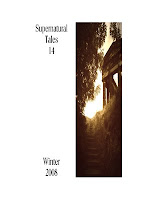 It's sort of nearly there, in a way. Well, I've got a lot of the editing done and written a nice review, and done a retrospective on a good book of ghost stories. A few bits and bobs still need doing. One thing I think I have got sorted is the cover. See what you think.

0 comments - is this a record?

I'm not sure there's much point in going on with this blog. I know one or two people look at it, but the fact that hardly anyone ever finds anything interesting enough to comment on suggests that I am really, really boring. I'm quite prepared to concede that. If anyone wants this blog to survive, speak up or I'll kill it off at the end of the month. Same goes for my HG Wells blog, which seems to be equally uninteresting.
- August 13, 2008 8 comments:

Oddly enough, this never occurred to me before. In MR James' 'A Warning to the Curious', the hapless antiquarian Paxton is killed by the vengeful ghost of William Ager. Ager, we know, was the last in a long line of guardians of the Saxon Crown buried at 'Seaburgh', i.e. Aldeburgh. The crown was the last of three buried on the coast of East Anglia to ward off invasions. (Not much good against the Norman Conquest, though, was it? Still a sore point up North.)

Anyway, the story pivots on the idea that Paxton is doomed regardless of what he does. He puts the crown back with the help of the narrator and his friend, but is still killed. However, I wonder if that's quite right. It's an obvious reading, but there are some questions.

Firstly, there's the issue of the other crowns. One was lost to coastal erosions. Paxton explains that it lies in a Saxon palace now under the sea. (Odd, isn't it, how magic stops working underwater?) More important, though, is the fate of the second crown. James knew his history, of course, and a Saxon crown was unearthed there.

"Camden states that an ancient Saxon crown was dug up here, weighing about 60 ounces, but was sold and melted down."
From The National Gazetteer of Great Britain and Ireland (1868)

Selling and melting it down seems a considerably more mercenary motive than Paxton's intellectual quest for an historic artefact. Yet there's no suggestion that anyone connected with destroying - desecrating - the second crown was harmed in any way. All right, one obvious conclusion is that Paxton's fate was down to the facts that a. he took the last crown, therefore England's last supernatural defence and b. William Ager was a spook, not a regular chap. Very unreasonable, ghosts.

But isn't there another possibility? Why does James' narrator state that, when Paxton's body is found, 'His mouth was full of sand and stones, and his teeth and jaws were broken to bits.' Why the mouth? Is it to emphasise the fact that Paxton's real sin was not to take the crown, though that was bad enough, but to disclose its existence to others? If he hadn't told before he put it back, would he have been spared?

It seems unlikely, to be honest. The tone of the story seems to be against it, as it is one of MRJ's bleaker tales. But then, to make Paxton's very human desire for company the cause of his horrible death would be a rather bleak twist.

If I lost a Strad I'd be afraid to sit down anywhere, for fear of that dread crunching sound that says 'You forgot to insure it.' Fortunately, J. Meade Falkner had a more interesting take on the idea. I'm listening to the first part of a reading on BBC7. If you miss it you can use the Listen Again feature on the website, which is here.

I don't know much about Falkner. The Nebuly Coat is one of those books I will definitely read during my long, comfortable retirement. (Irony meter is now at 11.) I do recall seeing a film version of Moonfleet. Now, did it star Stewart Granger, or am I misrememberising? No, according to Wikipeople the 1955 movie was directed by none other than Fritz Lang and did indeed feature Granger, plus George Sanders and Joan Greenwood. Cor. It be a story of smugglers, it be, which is not quite as good a pirates, but still fairly salty and swashburgling. Here's a bit in which a scurvy dog tries to do in Stewart Granger with a big spikey thing on a pole. I pity the fool!

Norfolk is a nice place

Spent a long weekend in Norwich with A Ghostly Company, the ghost story society. Had a good time, if a rather damp one. On Sunday we visited Aldeburgh, which is a lovely place.

Some of us decided to walk to the Martello tower where poor Mr Paxton cops it in MR James' classic 'A Warning to the Curious'.

Some of us remarked, as we reached the very exposed location, how dramatic the sky was. Then we realised this display was an approaching rain storm, which soaked us all to the skin within minutes. Gosh, I was a squelchy fellow and no mistake. I found myself squeezing out my socks in the Gents of the White Lion, where Monty James stayed. As he was a hearty, outdoorsy type, perhaps he got soaked and had to wring his socks out too. Who knows? Some things are forever hidden from.

I also returned from Norwich with some reasonably-priced paperbacks and a nice hefty copy of MRJ's Suffolk and Norfolk. I also have some fond memories of a nice bunch of people, who between them seem to share all my interests - ghostly tales, horror, sf, bits and bobs off odd historical knowledge, and indeed HG Wells.

I can heartily recommend Norwich, and the Maid's Head Hotel, where we stayed. Big ups (as they say) to the lovely Katherne Haynes, assistant editor of ST and organiser of this shindig. She worked everything out brilliantly and devised a tough-but-fair MR James quiz. I came second and won some spiffing Notre Dame gargoyl fridge magnets. I was trouced, however, by the magisterial figure of Roger Johnson.

Oh, and Colin Penn had a surprise for us on our first night, when we gathered for a meal. He gifted us all with our own ghosts, of the trouser-dwelling key ring variety! So now I have two tiny, screaming, glowing ghosts. Perhaps I'll start a collection, and set up some kind of orchestra.