Well, sort of. It shows how narrowly focused (and fed up) one can be at work. My job actually involves knowing the news, among other things, but I totally missed the knighthood given to the tall terror, Christopher Lee. A generation know him as Saruman and, erm, Lord Dooku in the rubbish Star Wars prequels. An earlier generation known him as Count Dracula, and of course he prompted a generation of small boys to put bits of orange peel in their mouths and pretend to have fangs... Or was that just me?

Anyway, hat-tip to the excellent Frankensteinia blog for the fact. Rightly, the author points out that Lee was also Hammer's first monster. Not Frankenstein. Frankenstein was the man, not the monster. Don't mix 'em up. It annoys people.

Sir Arthur Conan Doyle is best known for inventing Shirley Combs, the dynamic young female detective of 221B Baker St. However, he also wrote ghost stories. One of them, 'The Captain of the Polestar', is part of a short series of eerie Scottish tales dramatised by the BBC and available to listen to via the iPlayer on BBC 7. You can listen to it here. You can also read the original text here.

Some may find the dramatisation disappointing not because of what's in it, but because of what it leaves out. For me, however, the approach is quite 'modern' and satisfying. I also have a weakness for seafaring stuff in general, and this tale of whalers and their haunted captain is very atmospheric. BBC 7 recently ran Jack London's The Sea Wolf, which had a similar 'feel' to it - haunting female voice and all. 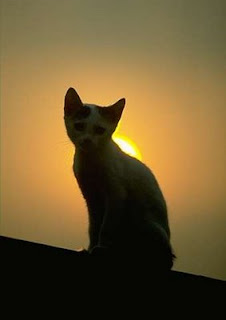 At last - ST15 has arrived and is sitting in a big box under the kitchen table. Obviously you can't see it from where you are, so I will have to post individual issues to readers. Gosh. Fortunately I have a stockpile of envelopes and am about to buy a ton of stamps. First up go the authors' complementary copies, then the copies to reviewers and influential editors - big hello to Ellen Datlow in New York - and finally the issues go out, alphabetically ordered, to regular subscribers. So, please have patience. After a very long wait and a lot of hassle, I'm posting them out in the next week or so. Gosh it's hot. Here's a picture of a cat to keep us all happy.

Supernatural Tales 15 is supposedly printed and has been despatched to me. Trouble is, it hasn't arrived. I did get the invoice, which was very reasonable. Well, it would have been if I'd received the goods I'd paid for. It was ever thus - the demand for money has winged sandals, the actual product you're paying for is being carried by asthmatic ant up the A19. Oh well. Suffice to say that I will continue to chase up the magazine and - who knows? - what is officially the summer issue may well be posted out before the autumn.

In more positive news - Pay Me, I'm Your Pal! I am opening a PayPal account so that people can buy ST online. This blog doesn't count as a proper website, but that's no problem - payments can be made through the exciting PayPal website itself. All I have to do is sort out a few bank details and I'll be up and running in a week or so. Huzzah!

As literary ghost stories are in short supply, here's a bit of a supposedly true one. Amazing that I've lived in Britain all my life and have never encountered a ghost, despite this being the most haunted nation on the planet. Of course, some shop assistants do qualify as the undead...

A Strange Map and a Ghostly Tale

One of my favourite sites is Strange Maps, because I like maps. And I'm strange. Anyway, the latest entry is a weird one about a shifting sandbar that's a ship's graveyard. Along the way you get a spectral vision on the bridge of a doomed trawler, and some other stuff.

Thraxton Whelk in... Are Their Brain Cells Still for Tea?

'Are you familiar with the Wittering-Churnleys?' asked my gifted friend.
I was somewhat taken aback, as the question came at the end of a prolonged silence. Either that or I had gone temporarily deaf. Perhaps it was a bit of both. I made a mental note to consult and earwax specialist and learn to lipread.
But Whelk was speaking again...
'Oy, bumface. Wittering-Churnleys. Any clue?'
'The only family of that name I'm aware of are the hereditary bailiffs of Trample-Badger. The first baronet was ennobled by Charles II for devising a billiard table with pockets, considerably shortening the game. Since then the Wittering-Churnleys have distinguished themselves in statecraft, the military, the navy, the church, and 'I'm a Victorian, Get Me Out of Here!' Rather unusually, their coat of arms is in fact a coat, with lots of arms on it. Oh, and their entire stock of goldfish was eaten by Swinburne when the current baronet defaulted on payment for a particularly disgusting limerick...
'Right, they're the ones. They've got problems with the undead. Load up and let's move out.'
I needed no further admonition. I checked the chambers of my trusty Webley 38EE, packed my Gentleman's Collapsing Skiff, and ordered some nice fresh lobsters. I then hied me to the bustle of King's Cross, where I purchased two tickets. Unfortunately - as Whelk pointed out somewhat acerbically upon my return - they were tickets to see Miss Tryphena Botts in 'Ankles Wahay!' at the Adelphi Theatre, Streatham.
The error was soon rectified, however, and by midday we had settle into our compartment in a Sleuth-Class Carriage of the Ay Oop Northern Railway for the long journey to the bleak, grouse-ridden, heather-infested domains where the Wittering-Churnleys had churned and wittered since time immoral. As Whelk sat musing on life's passing show and sucking on his old meerschaum (I regretted once more that I had never succeeded in weaning him onto a pipe) I perused for the thirteenth time the curious letter from the umpteenth baronet, Sir Frisby.

I am writin you coz the forin secterry sez you know about all that weird stuff and I am proper cheesed off with these bleedin zombies. They is always coming round the manshun and biting the gardeners and that. I have tried shootin the barstids but unless you blow out all theyre brains it don't do no good, also me bird is getting the hump about the mess on her curtains and that. I'd make it worth your while if you figgered out a way to keep the stiffs in the ground where they belong. (And not a word to the effin taxman, wink wink.)


'From the style he is evidently a fellow Old Etonian,' I hazarded.
'Yes, but what about the zombies you shortarsed nit?' ripostulated Whelk.
Sensing a hint of irritation in my companion, I endeavoured to recall all I had read in the Wholesome Chap's Book of the Arcane about the strange Caribbean practice of raising the dead.
'Surely a zombie must be raised by a priest of the voodoo cult?'
'And this priest bloke would look like what, exactly?'
'A tall, imposing Negro in particoloured feathered robes and a terrifying mask or corpse-like face-paint, typically surrounded by frenzied wild-eyed Haitian drummers and perhaps a dozen half-naked mulatto maidens writhing in an ecstacy of unholy bliss. Sort of thing. At a wild guess.'
'So, not too difficult to spot in the environs of Barnsley then?' returned Whelk.
It was a typically canny observation. Why had not the local constabulary stamped out any zombielicious antics? Why hadn't someone written to their MP about the sharp decline in property prices? And why hadn't young loafers and ne'er-do-wells started talkin' in, like, dat ludicriously affected sort o' way, an' ting?
A puzzler and no mistake.