This handsome volume collects some of the weird tales of a remarkable woman who first enjoyed success in the theatre, only later moving on to become a short story writer and novelist. Clotilde 'Clo' Graves (1863-1932) was born in Cork but spent much of her working life in England. In her forties adopted the pen-name Richard Dehan and also followed the fashion of quite a few literary and artistic ladies by adopting male attire. For the last few years of her life she lived in retirement in a Middlesex convent.

It's interesting to note that her first work for the stage was entitled Nitocris. The Egyptian queen who bumped off her enemies was also the anti-heroine of the first short story by another playwright, Tennesse Williams. And, before she gained a reputation for gothic and ghostly fiction, she had helped adapt Rider Haggard's She for the stage. Haggard may have been one of the major influences on her work.

The stories in this collection certainly include a few examples of what is termed 'Empire Gothic', accounts of British colonial doings that trigger strange and occult events. This is particularly true of 'The Mother of Turquoise', in which a British expedition finds a rich vein of the eponymous stone near a temple of the Egyptian goddess Hathor. The story developes into a lurid tale of human sacrifice and mystical shenanigans. A central figure, an aged African witch woman, is very similar to Gagool in King Solomon's Mines.

I've been ill for over a week with a presumed virus that, according to several LFTs, is not Covid but certainly feels like it. Apparently, there is 'something going round'. Anyone wondering why I haven't posted anything in a while, that's why. I am on the mend but still mentally foggy and very tired.

The first great ghost story movie made in my lifetime (sort of) is also arguably the best. 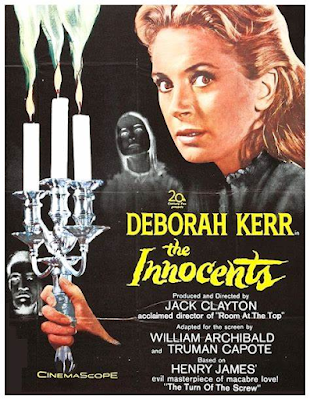 Henry James' 'The Turn of the Screw' is rightly considered a landmark in the genre, but it is also tricky to dramatise because relatively little happens - at least in the way of action. Much that is crucial occurs in the mind of the young governess, who is forced to confront some terrible truths about this world and the next. What's more, the constraints of his own artistic sensibility - not to mention the actual laws of the day - made it difficult for James to convey just how depraved the children in the story become under the paranormal influence of Peter Quint and his abused lover, Miss Jessel.

And yet Jack Clayton's film manages to tackle all of these problems and emerge triumphantly - in just over 90 minutes there is never a dull moment and some scenes are intensely disturbing. This is in part due to excellent casting. Megs Jenkins as the housekeeper is - as always - wonderfully watchable. Deborah Kerr's governess is excellent, recalling the put-upon ladies of Victorian melodrama and reminding us that Henry James (like that other James, Montague Rhodes) admired Le Fanu. 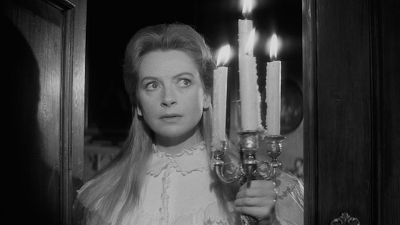 The script might have been a problem. The opening credits first mention John Mortimer for 'additional scenes and dialogue', then Truman Capote and William Archibald. That kind of thing often signals a troubled production, but here there are few signs of revision or general tinkering. The odd Americanism does creep in but that's about it. The script was based on Archibald's 1950 stage play - hence some additional bits and bobs.

This is a film of the seen and unseen, heard and unheard. It is just barely possible that there are no ghosts and that Myles and Flora are simply lonely, troubled children. Their parents are dead, after all, and their only close relative (Michael Redgrave, as good as you'd expect) rejects them in all but a financial sense. But we can't disbelieve the governess, or at least not completely. This is a story in which belief in supernatural evil is actually more comforting than the alternative.

It seems that major creative differences were the driving force for much of the film's ambiguous power. Clayton and Archibald differed on whether the governess was just imagining it all. Archibald took the traditional view and, to his credit, Clayton favouring a more Freudian interpretation didn't stop him from including a long, dream-like scene that hints at the opposite.

At just over ninety minutes, The Innocents manages to deal with every aspect of the traditional, Victorian ghost story and still be a compelling 20th-century drama. It stands up remarkably well today. Indeed, there has been a modest revival in period Gothic lately. A good time to seek out the House of Bly if you don't know it, or return for a visit if you do.

'Self Catering' by Helen Grant