The redoubtable New York editor Ellen Datlow has published her (very) long list of stories under consideration for her next anthology. The stories are from 2021. I'm pleased to say that ST is well represented, with no less than 14 tales in the semi-finals, so to speak. They are:

Dawson, Sam “The Minds Within”

'And Music Shall Untune the Sky' by S.A. Rennie

The final story in The Ghosts & Scholars Book of Follies and Grottoes brings us full circle, in a way. The narrator recalls arriving at a certain country house in 1937, and mentions the oppressive heat. The overall feel of the story is very traditional, and the characters might be the creations of E.F. Benson, L. P. Hartley, or Walter de la Mare.

Two former schoolmates have been reunited by chance, or so it seems. The protagonist Richard Murray never considered himself a friend of the somewhat effete Julian Sleat but accepts an invitation to visit his newly-acquired estate. The two men are interested in an obscure eighteenth-century composer, and Sleat has acquired some rare lost works by this Casimir Hoffner.

It transpires that another guest of Sleat, Simon Larch, a gifted but troubled young English composer, is seeking to recreate Hoffner's works in a folly within the grounds. There are some excellent passages in which Hoffner's obsession with the music of the spheres is explored. I love stories that take the cosmic and bring it down to earth, so to speak, and Rennie succeeds in doing this quite brilliantly. Larch's performance of Hoffner's sinister masterwork proves disastrous. Something is unleashed upon the world. The narrator barely survives to tell his tale.

Overall, this anthology is one of the most entertaining I've read in recent years. As always, editor Ro Pardoe has done a first-rate job of winnowing dozens (scores?) of submissions to offer the discerning bookworm a well-balanced and satisfying read.

Apologies to my multitude of followers, but I've made a booboo. I left working on issue 51 of ST too late, and now I can't see any way to publish it before the New Year.

To explain: there have been widespread postal strikes in the UK with more to come during the always-chaotic period before Christmas. I can't expect to receive anything on time or even at all until the situation calms down a bit. Normally I get a proof copy delivered - so I can check an actual printed issue. Then, when I'm satisfied it's okay (or I'm just fed up) I get a box of a few dozen copies delivered and send them out to UK subscribers and, of course, UK contributors. Overseas readers/contributors are handled differently.

Occasionally a copy gets lost in the post, but lately, the standard of service has gotten considerably worse while postal charges have risen sharply. So, a tale of woe. I hope the 2022/3 issue can be out by the end of January. Sorry to disappoint anyone who was looking forward to some new stories for Christmas.

'When I Heard My Days Before Me' by John Howard

The penultimate story in The Ghosts & Scholars Book of Follies and Grottoes falls into a roomy category - ideas I'd like to write about myself. It concerns sound mirrors, a pre-radar attempt to create a coastal early warning system during the run-up to World War 2. 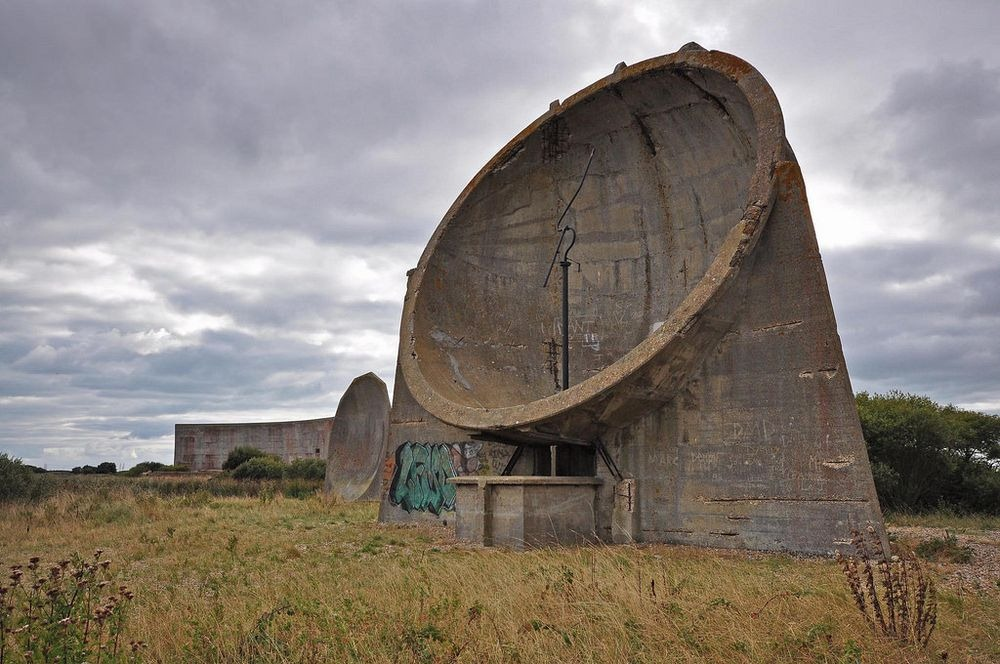 Sound mirrors were large concrete structures and - as most were abandoned rather than demolished - have something of the feel of modernist art. These are, quite reasonably I feel, categorised as 20th century follies, examples of landscape features

In Howard's story, the modern protagonist observes the restoration of some of these interesting structures near his home. It's a story about connections - the links between people today, and the way in which past events echo down the years. The title refers to Locksley Hall, Tennyson's poem about progress and change. Like the narrator of that poem, Howard's protagonist moves on. This is not a horror/ghost story, more a meditation on life and love.

And so we nearly reach the end of this excellent anthology. Just one more story to go!

For the first time (probably) here I would like to mention a Nigerian horror film. Well, I say horror, but Juju Stories, an anthology movie of three stories, is fairly restrained and focuses more on character than scary incidents. This is a good thing, as is the Nollywood production style i.e. everything on location - real streets, real houses, real restaurants etc. Rules on content mean that there is no gore beyond a glimpse of a bloodied corpse in the distance. This all gives the film a subdued and sometimes very realistic feel.

The film is the work of a collective called Surreal16, and there is definitely a touch of surrealism in all the stories. The first, 'Love Potion', is quite conventional but still holds the attention. Mercy, a single career girl who aspires to be a novelist, wants to find love. She meets the ideal guy at a party, but he's taken. Mercy can't stop thinking about him, though. A friend recommends juju, traditional magic, and after some hesitation concocts a love potion and sneaks it into the tea of her ideal man. This breaks up his existing relationship and then Mercy can have him all to herself. Surely, though, the use of magical methods has a downside? Or will Mercy's amoral approach be rewarded? The plot offers a kind of twist, and director Abbu Makama ends on an image that is refreshingly non-gimmicky.

The second story, 'Yam' is the weirdest. There's an urban legend in Nigeria that picking up lost cash on the sidewalk can lead to the finder turning into a yam. No spoilers here, this is stated at the outset. Suffice to say that this does indeed happen, and the normal course of events regarding yams leads to some serious issues. This is a truly surreal piece, complete with a top-and-tale scene of a prosperous couple having dinner and talking about the upsurge in mental illness among the country's poor. 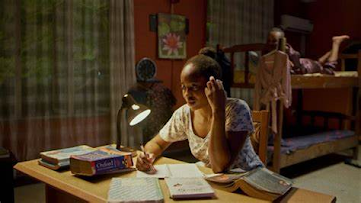 The last story, 'Thou Shalt Suffer a Witch', has a distinct Carmilla vibe. Student Chinwe becomes increasingly disturbed by the antics of Joy, a girl who regards her as her best friend and seems to know a lot about her life. When a handsome guy comes between them, Joy's response is drastic. Again, Hollywood horror convention is eschewed in favour of something rather different, and the ending is surprisingly effective.
Overall, Juju Stories is an absorbing watch. Surreal16 have produced something more interesting than the average horror movie, and managed to create an anthology movie with no weak stories.
- November 19, 2022 No comments:

Erudite is a word that inevitably springs to mind when reviewing a Mark Valentine story. His contribution to The Ghosts & Scholars Book of Follies and Grottoes is a case in point. Like Katherine Haynes' story (reviewed earlier), 'Mad Lutanist' references Thomas Love Peacock and the Romantics. The focus is on science this time, though - a Romantic obsession often overlooked, except for commentators on Frankenstein.

In this story regular readers of Valentine's stories are reacquainted with the Connoisseur, a sort of occult detective but not in the Carnacki or Silence mode. The Connoisseur uncovers and probes mysteries but these are seldom life-or-death affairs. In this case he teams up with his friend Tom, a lady who fixes clocks. Together they unravel the backstory of a fancy dial divided into eight points, which is connected to a folly called the Tower of Boreas. Along the way we learn of a lost Peacock text and are reminded of the role of the aeolian harp in the theories of Coleridge.

A supremely civilised story, this, and one that proves the stakes do not need to be high for a story to be compelling. I'm coming to the end of this excellent anthology, and I can already state that it holds up well against previous G&S/Sarob collaborations.

''Father' O'Flynn and the Fressingfold Friezes' by Tina Rath

A jauntily alliterative title and the name of Tina Rath always guarantees a certain kind of story - witty, erudite, with interesting ideas. In this anthology of follies and grottoes hers is the lightest story, but still has a string in the tail.

A wealthy City type buys the eponymous run-down country estate and hired the best people to renovate and restore the house and its environs. Among the latter is a temple whose friezes, when restored, turn out to be more than a little lively. Lively as in extremely kinky, violent, and dangerous as soon as the sun goes down. Legend has it that one of those mysterious foreigners - possibly an Italian - was responsible for their creation back in the Georgian era. And some kind of bargain with the then-landowner was involved.

The first clever twist is that exorcism is out of the question - interfering with the national heritage, don't you know. So the obvious thing is to 'get a man in' i.e. an unlicensed exorcist. Enter 'Father' O'Flynn, who arrives in a rusty van and is as far from the conventional idea of a battler with Satan as you can imagine. He's the sort of exorcist who will tell you 'It'll be ready Thursday, squire, on me mother's grave'.

O'Flynn (not his real name) beings with him a team that proves to be less than qualified, in one very significant respect. However, the result of the botched ritual at least gives Fressingfold's new owner an interesting business opportunity. I first read this story many years ago (it first saw print in 1977), and it has stood the test of time.