Showing posts from May, 2007
Show All

Just checking the likely page count for ST12. Oh, how hilarious it would be if it turned out to rival Ulysses. No, not quite. Eighty-four pages of fiction. Throw in about ten pages of reviews and a bit of marzipan, and I should be able to offer exactly 100 fun-packed pages. I like the idea of offering exactly 100 pages every time, for completely infantile reasons. Anyway, the point is that ST12 is on course. Yay! I feel terrible, though - a head cold I can't shake off. I bought a bottle of Bells and intend to give it a right old hammering this weekend. Oh, and why Rod Serling? Well, one of the reviews concerns Mr Serling's post-Twilight Zone antics.
Post a Comment
Read more

Maybe it's because he's a Londoner

- May 29, 2007
Mike Chislett, so far as I know, doesn't have internet. So I can express my admiration for him without making him go all red and flustered. He's a remarkable writer, and perhaps one of the true originals - someone who, while widely read and keenly interested in the greats, still goes his own way. I've just been correcting the proofs of his story 'Blood and Glass', which rounds off his Devil's Mirror sequence. It's quite long - thirty-odd pages - and it was a marathon job to type it up. Needless to say I made plenty of errors, some profoundly stupid. Tiredness does it to you every time. But the story itself is wonderful, not least for the way it suggests - not too explicitly - a story behind the story that maybe-explains it all. Or maybe not. I've still got to sort out 'A Game of Ghosts', the title story of the forthcoming special issue. I'm spending a lot of time in Mike's head at the moment, as I've also been checking through his st
2 comments
Read more

What I've been up to lately

- May 27, 2007
1. Donned rabbit ears and improvised bunny tail for charitable purposes. Pictorial record of this exists. Damn. 2. Haircut. Hair is now shorter. Success! 3. Received money and/or praise for ST11. Returning to twice-yearly format seems popular. Voting for best story has started early. So far it's a draw between Peter Bell and Helen Grant, with Mark Nicholls in third place. Early days yet. Also receiving good response for special Mike Chislett collection. 4. Watched film - Things To Come. Amazing qualified failure. The only British sci-fi blockbuster ever, really, unless you could Kubrick's 2001, which was made here. Notable that the American trailer on the DVD described Wells (in 1936) as the World's Greatest Historian. 5. Started reading William Trevor's collection 'A Bit on the Side'. He's as good as he's cracked up to be. Always a relief to 'discover' a writer in middle age, especially a short story writer.
Post a Comment
Read more

The cost of humble pie just went up

- May 23, 2007
Being unworldly and/or stupid I have been known to make mistakes. My latest seems to relate to postage in the UK. I thought I'd grasped the new system (based on size as well as weight) but clearly I've goofed in at least some cases. So anyone having to pay any excess postage should deduct it from their next subscription, assuming they want to renew. So much for the Royal Mail website, with its claim that 2nd Class Large is 'suitable for most magazines'. Ah, well...
Post a Comment
Read more

- May 22, 2007
More inquiries from people wanting to submit stories. I don't think one, so far this year, has bought a sample copy of ST. They don't want to read the magazine. They just want to send me stories that are (in general) unsuitable for it. Should I make it obligatory for writers who have not yet done so to buy a copy of ST if they want to submit stories? Would this be unfair to impoverished authors, scribbling away in garrets, coughing consumptively? After all, they couldn't afford to buy every magazine on the market. Any moral philosophers reading this, please advise. Unless you're mad and/or French.
2 comments
Read more

- May 20, 2007
Conor McPherson was twenty-five when his eerie play The Weir won a deserved acclaim on both sides of the Irish Sea. His most recent work, The Seafarer, is another foray into the realms of the supernatural. Like The Weir, it centres on a group of garrulous Irishmen who are drinking, arguing and yarning. Unlike the earlier play, though, the supernatural element is much more explicit. The play centres on the tribulations of Sharky (Karl Johnson), a middle-aged man who seems to have made a thorough shambles of his life. Having lost yet another job - by becoming over-fond of his employer's wife - Sharky has returned to Dublin to look after Richard, his older brother. Richard (Jim Norton) has recently gone blind due to an accident involving a skinful and a skip. He is now a demanding invalid. We join Sharky on Christmas Eve, and the seasonal drinking is well under way. Sharky has sworn off the booze for the duration. Richard, predictably, regards him as a party-pooper. Their friend Iv
Post a Comment
Read more

In the next exciting issue...

- May 19, 2007
With ST11 on its way, thoughts turn to ST12. Most of the stories are sorted, bar a last proofing. And looking over them I was surprised to find similarities of theme and idea among a rather disparate bunch. Children do seem to crop up rather a lot, one way or another. So does physical deformity (not in the same stories, I'm glad to report). Also, people getting lost in what should be familiar territory, or at least harmless places. Maybe there are only a few basic ways to tell a ghostly tale, and we're bound to see them coming round over and over. Anyway, what's in store? Simon Strantzas has another story about Toronto, which he tells me is a great place to live. You wouldn't think so... Mike Chislett takes a mother and daughter into a foreign cathedral and separates them by extraordinary means. Gary Fry confronts a gang of squabbling builders with something grotesque. Gary McMahon and Duncan Barford both offer very short, inner-city horrors. Bill Read has written an in
2 comments
Read more 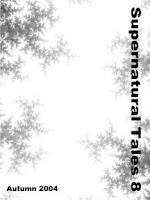 More precisely, the lost covers. I tried to liven up the appearance of ST shortly after a distinguished editor (after praising the contents highly) complained that it looked like 'a parish magazine'. What parish magazines actually look like these days I couldn't say. But, stung to action, I thrashed around trying to find artwork that would make it look less parishy. Or should that be parochial? I attempted to create abstract, stylish covers, but somehow was never satisfied. In the event I was spared further internal wrangling when Allison Lovelock and Dallas Goffin - two excellent, and very different, artists - both offered me some fine work for free. But I wonder how people would have reacted if I had taken the homespun fractal route instead?
4 comments
Read more

Blatant Dishonesty in a Good Cause 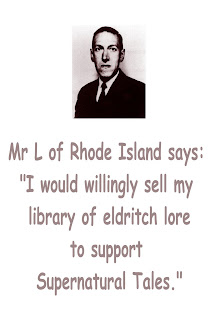 Having recommended the young persons below to the eager masses, I suppose I ought to emphasise the fact that I'm peddling a fine magazine of original short fiction. In a marketing coup, I have managed to secure celebrity endorsements from some important people...
1 comment
Read more

- May 10, 2007
No, really, there are creative young people out there. They don't all just stand around on street corners quiffing their blingboxes and shouting 'Jackanapes!' at passing constables. No! Two younger personages of my acquaintance do music and jewellery, though not at the same time. http://doctorphonic.blogspot.com/ http://micro-giraffe.blogspot.com/ Go to these blogular places. They are quite interesting for ladies and/or gentlemen. I endorse them utterly.
Post a Comment
Read more

Issue Eleven is Go-ing quite soon

- May 01, 2007
Well, that's that then. I have ST11 in great heaps lying around the living room. I have lots of envelopes and stamps. I'm in the process of printing myriad sub renewal slips to shove in - ooh, luvverly money! I have also had some renewals courtesy of folk at the Derby Alt.Fiction event. While it was a somewhat sparse audience for the ST11 launchette, those who were there did appreciate Peter Bell's excellent reading. In fact, his story came across even better aloud than it does on the page. Great stuff. So, if any readers are out there, ST11 will be heading your way in the next week or so. I think the Bank Holiday might be a good time to sit stuffing envelopes. It will probably rain, after all... If you need any information, gentle reader, email me.
2 comments
Read more
More posts