What a Daft Cult

In horror fiction, such as the myriad novels of the late Dennis Wheatley, there are cults galore. Cults that worship Satan are always popular - well, they are with Satan. Also there are cults that worship the Great Old Ones in HP Lovecraft's stories, and those of his many acolytes. It's all good murky fun, of course. If you're not having an orgy you're dressing up in nice robes and sacrificing somebody to something.
In reality, though, cults are less fun. Apparently they break up families, brainwash people and are generally a bit nasty and exploitative. This is not surprising, really, as all irrational movements have to dominate vulnerable, unhappy people. They're not likely to get happy, sensible people on board with their nonsense, are they?
Which brings me to Scientology. Apparently someone was recently cautioned by a copper in London for holding a placard that describes Scientology as a cult. This is now against the law. I know, it makes no sense to me either, but apparently the fuzz and the Scientologists are getting mighty cosy down the Smoke. So much so that simply calling a cult a cult can be interpreted as a crime. If the copper in question has been given the right orders. By a Scientologist, or a Scientologist's friend?
Bear in mind that in the past the Metropolitan police has not exactly covered itself in glory. Stephen Lawrence, anyone? They couldn't catch a gang of murderers, but they were straight onto the dreaded cult crime.
So here I go, probably breaking the law myself. Because Scientology is a cult. It was founded by a bad sci-fi writer, L. Ron Hubbard, who allegedly made a bet in a bar that he could create a new religion. He made a fortune charging Americans (mostly) to join his church. Oh, and what do Scientologists believe? That we are all a bit loopy because a Galactic warlord called Xenu shoved some of his enemies into a volcano a few billion years ago. Their souls were reborn in us, you see. As a basis for a movie it would be bollocks. Audiences would laugh if that was the pay off. If Tom Cruise (who else?) were to say: 'You see, Cindy, Mr Hitler invaded Poland and gassed all those people because evil Lord Xenu did a bad thing way, way back.' Yet that is what Mr Cruise and thousands of others genuinely believe. And if that doesn't make Scientology an absurd, crackpot cult I don't know what does. So come and get me copper! (Note to self - end with appropriate pic of real actor.)

The Pleasures of Reading

Perhaps I ought to make clear for British readers (all three of them) that I mean reading books, and not Reading, the town in Berkshire. John Betjeman once mixed the two up when he attended a lecture by Lord David Cecil that bore the title of this very post. Fact. Allegedly.
Anyway, I don't know if it's just me or if it's a general middle-aged thing, but I've found that reading brings me less pleasure than it used to. When I was a lad I used to devour a book a day. In the late Seventies a novel or collection of stories (a much rarer treat) cost as little as 35 pence (!). Blimey. I can hardly believe it myself, but it's true. Paperbacks crashed through the one pound barrier at around the time Thatcher came into office. (I can't as yet think of a way of actually blaming her for this, but I'm working on it. )
Any road up, I read voraciously. My favourite authors, during my teen years, were sf writers of the New Wave breed (Ballard, Aldiss, Priest, Holdstock), plus a lot of the older 'hard' sf school (Niven, Asimov, Clarke) and quite a few of the less classifiable authors who might be termed 'soft' sf. The latter included Tiptree (who I've mentioned earlier), Silverberg, Le Guin, Vance, Dick, Herbert and Ellison.
It's interesting to note how that disparate crew I befriended have fared in the last thirty years. Ballard is now a grand old man of English letters, and sadly near the end of his days - prostate cancer. Christopher Priest seems to be faring reasonably well, though I've not read his newer stuff. The same can be said for Brian Aldiss and Robert Holdstock. Ursula Le Guin and Robert Silverberg are still 'in play', as is Jack Vance. Harlan Ellison is, according to one source, still feisty enough to goddam Dubya from here till Tuesday, for which much thanks. Asimov and Clarke are no longer with us, of course, and Niven has become a sharecropping old right-wing bore, which is a pity. Frank Herbert is gone, to be remembered for Dune and nothing else, which is also a pity. His other novels, such as Hellstrom's Hive and The Eyes of Heisenberg, were pretty good, and his story collections/fixups, like the Godmakers, are fondly remembered.
I suppose if you're an ageing nerd the equivalent of buying a red sports car when you pass forty is to start re-reading pulp sci-fi. Anyway, to cut a long story short, I recently revisited Philip K. Dick, friend of my adolescence, by purchasing three of his early novels in one volume. They are: The Man Who Japed, Dr Futurity, and Vulcan's Hammer. So far, so good.
The Man Who Japed has all the makings of an expanded short story, but the typical PKD ingredients are there: a future society ruled by repressive jerks, a hero who rebels by ingenious means, a few bits of sf hardware and some folderol about psychiatry and history. Throw in a temptress with a 'deep chest' and it's a full house. It's not substantial but it's enjoyable.
Dr Futurity is much better. Published around the same time as The Man in the High Castle, it's an interestingly weird take on altering history. A doctor from the near future is swept forward to the 25th century where he finds doctoring is a crime. In a fiercely eugenicist society people who are injured or fall ill are killed by officials called 'euthanors' - anti-doctors. It sounds nightmarish, but with typical quirky panache Dick presents this cruel but vital world as in many ways attractive and even admirable. And that's just the first part of a story that involves trying to assassinate Sir Francis Drake on racial grounds. Wow. I read it in a single evening and it did me a power of good.
On, now, to Vulcan's Hammer, which - judging by a synopsis on the PKD site - involves religious fanatics in a world ruled by a super computer. Ah, the joys of youth. Sometimes you can go home again, if your home is a brilliant writer's world. I wonder if there are any good deals going on Jack Vance's early stuff?
- May 13, 2008 3 comments:

A bit wobbly but basically okay 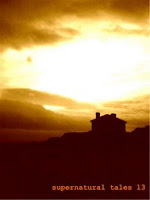 ST13 is here. A friend who has a car kindly helped me collect it from the depot, where it had languished for a while due to delivery confusion. The magazine's arrival coincided with a minor mishap, whereby I pulled a hamstring, tendon or some other bit of my left calf muscle. I can only afford two calves, being but a humble yeoperson, so nearly losing one was a bit of a bind. Fortunately a weekend spent with my leg in a horizontal position, or very near, seems to have allowed nature's wondrous healing properties time to work. I can now walk about as normally as ever. Hmm. Anyway, I am now posting out copies of the magazine. It's not quite the perfect print job I'd hoped for, but seems eminently readable to me. I do hope everybody likes it.
- May 06, 2008 3 comments:

You're a big parrot, but you're out of shape

Been to see Treasure Island at Newcastle's Theatre Royal. Apparently the show is about to transfer to the West End. It's well worth catching, as this is a very well-paced dramatisation of Stevenson's classic. And yes, it is a kids' book. And there were indeed many small persons for the 7 pm performance on Wednesday. Most of them girls, actually, which is ironic given that RLS described it as a book for boys.
If you know your Treasure Island, you'll be aware that the part of Long John Silver was memorably played by Robert Newton, who did it with maximum 'Aharrr! Jim lad!' This could have put the mockers on the production, had not the thesp playing Silver decided to channel Michael Caine. Was this a tribute to Tyneside, and 'Get Carter'? Whatever the reason, it worked well. The cockney gangster Silver was suitably menacing, but didn't lack roguish charm.
Interestingly, the play was very faithful to the book, right down to Jim Hawkins' killing of Israel Hands. Indeed, the shooting was pretty damn loud, complete with blinding flash from Jim's pistol. In fact, the second act could have been pretty grim, but a bit of comic relief was provided by Ben Gunn, and his dreams of cheese - 'toasted, mostly'. When Jim asked Ben what he'd do with his share of the treasure, a little girl behind me piped up: 'Cheese!'
I suppose a lot of kids, and perhaps their parents, might see Treasure Island as just a short step up from Panto. Well, in a way it is - larger-than-life characters in quaint clothes setting off on an adventure. But it's also quite moral, in a (good) Victorian sense. Jim becomes a man not by killing Israel Hands, as Silver claims, but by keeping his word and letting Silver escape, as Ben Gunn points out.
- May 01, 2008 No comments: