Showing posts from April, 2017
Show All

Irish Pagans Do It Right 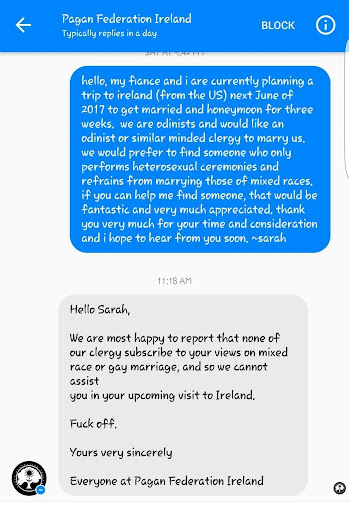 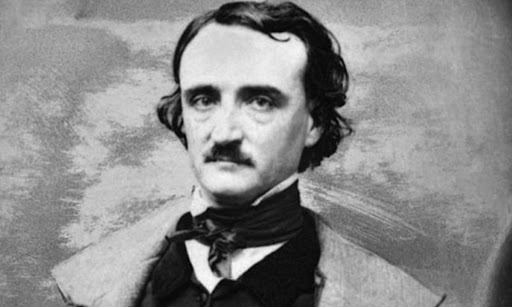 The Sunday Times (evil Murdoch paywall, but you can sign up for a couple of free items a week if you like) has an interesting article by Stephen Amidon about the American short story. Amidon argues, quite reasonably, that American authors are often masters (or mistresses?) of short-form fiction. Most British novelists are not. Ireland is another story, but let's stay focused here. According to Amidon While the modern short story was probably born in Germany in the early 19th century, with works by writers such as ETA Hoffmann and Heinrich von Kleist, the genre came into its own in the US over the next few decades. The honour of the first great American short story must go to Washington Irving, whose canonical The Legend of Sleepy Hollow was published in 1820.  It was in May 1842, however, that US pre-eminence was firmly established when Graham’s Magazine of Philadelphia published two pieces by the 33-year-old Edgar Allan Poe. The first was one of his “tales of ratiocin
3 comments
Read more

'The Keeper' by Alan Garner

This is a half-hour story from the early Eighties TV series Dramarama, produced by Thames for older children. You can find the whole series (in glorious VHS quality) on YouTube, but Garner is the star writer.
Post a Comment
Read more

The writer John Reppion, who I had the pleasure to meet all too briefly in Liverpool, and his partner Leah Moore are working on graphic novel versions of M.R. James ghost stories. They're doing a spiffing job IMHO. Check out this link .
Post a Comment
Read more

'Between Me and the Sun'

The third and final novella in From Ancient Ravens is by John Howard. If Ron Weighell's style is Decadent absinthe and Mark Valentine's is nostalgic old English ale, Howard's is a drink of cool water, or perhaps refreshing lemonade. This is, at first, a relatively simple tale of three boys growing up in rural England. It's told from the viewpoint of David, whose relationship to his long-time friend Clive becomes complex in early adolescence due to the arrival of Iain. Iain is a dreamer, into astronomy, a lover of landscape. Tensions between the three build up at they approach their O-levels - this is late Seventies England, judging by such internal evidence. Eventually bickering and bullying leads to a strange tragedy in a complex of chalk caves. This story reminded me slightly of 'Death By Landscape' a Margaret Atwood story that also concerns a baffling disappearance. Like Atwood, Howard is keen to explore the far-reaching consequences of seemingly
2 comments
Read more

I like stories within stories. Ron Weighell's contribution to From Ancient Ravens is a tale-infested tale of a storytelling club in old Budapest. The era is one of Decadence, the characters are larger than life, and the tales they tell are correpondingly extravagant. First up is 'The Recondite Lives of Giorgio Vasari', a story of Venice. A browser at an antiquarian bookshop becomes acquainted with two mysterious bibliophiles. They offer him the chance to examine one of their unique collection of obscure volumes, but there is catch. He can only read for as long as a lamp burns. The narrator chooses a mysterious volume that seems to be the original, unexpurgated text of Vasari's famous Lives of the Painters . It is replete with odd and disturbing anecdotes of Renaissance Italy many obviously fantastical. Or are they? He comes to suspect that 'The world is full of gods.' The second tale told is 'The Capriccio', a vignette concerning a sub-genre of
2 comments
Read more

First time author Giselle Leeb has won the popular vote for issue 34! Well done to her, and a princely sum of twenty-five quid will be heading her way shortly. If not sooner! If you'd like to read Giselle's story, or indeed any of the excellent tales in the latest issue, why not buy a copy? You know it makes sense. Purchasing any issue of ST is remarkably easy. Just go here and then click on your method of choice.
Post a Comment
Read more

From Ancient Ravens - 'The Fifth Moon' 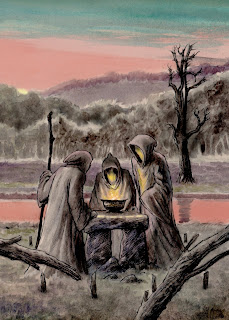 Paul Lowe's expressive depiction of the authors' muses at work The latest volume from Sarob Press is the last in a series - the 'New Impostors', Mark Valentine, Ron Weighell, and John Howard. In the past these three literary scamps have paid tribute to Arthur Machen and Algernon Blackwood. To sign off they have produced a third volume of wholly original novellas. From Ancient Ravens takes its title from Shakespeare. Look it up! First up is Mark Valentine, with 'The Fifth Moon'. This is the tale of a writer who sets out to produce a popular book about one of the great moments in English history, the loss of King John's treasure in the Wash. (For overseas readers, the Wash is a tidal bay and not a laundry service.) Accompanied by a photographer the first-person narrator sets off for East Anglia to search for local legends about the incident. Inevitably, he finds far more than he bargained for. This story is set in a period that might be vaguely termed
Post a Comment
Read more
More posts