See below for a mention of the original story by George Toudouze in the new magazine Nightmare Abbey.
- July 17, 2022 No comments:

A new horror magazine? Surely not. But yes, here it is! And what a humdinger it is. Looking very like an old-style pulp with a nicely garish cover, but much bigger. This is a big premier issue, and offers an impressive array of fiction plus feature items. 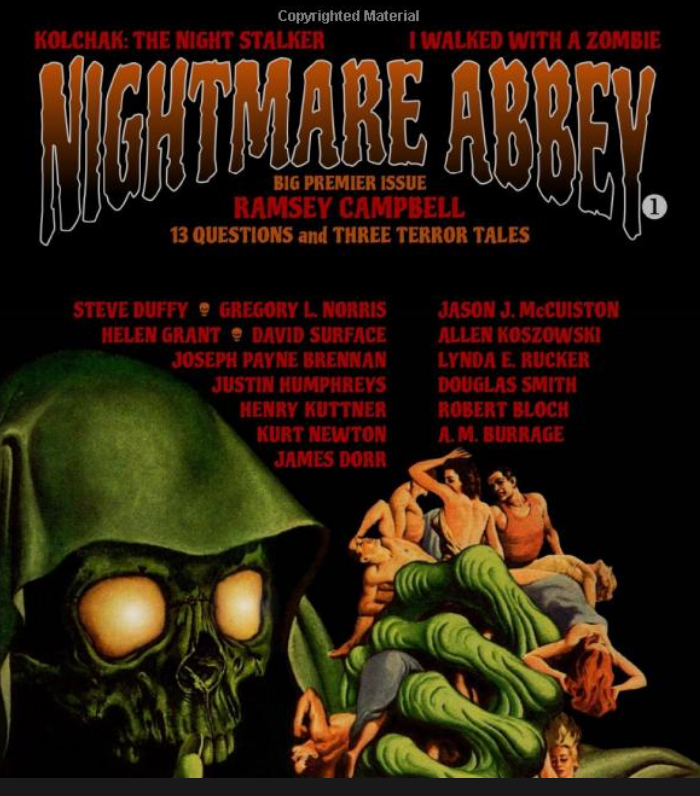 In his introduction, editor Tom English discusses his love of the genre and his quest for a suitable title. Titles that are both pithy and original are, as any writer knows, not easy to come by. He finally settled on one used by Thomas Love Peacock for his parody of the Gothic genre. (And by your humble reviewer in a very minor work.) English also stresses that he wants to avoid 'gross out' horror in favour of more subtle fare, which is fine by me. Horror does not have to be bloody.
The cover is by the great Virgil Finlay, with interior art by Allen Koszowski. I think the latter's work lives up to the great tradition of horror illustration, offering both Gothic atmosphere and sly wit. There are two excellent non-fiction pieces. Gregory L. Norris offers a fine appreciation of the TV series Kolchak the Night Stalker, a great favourite of mine. Justin Humphreys has a similarly insightful piece on Jacques Tourneur's film I Walked With a Zombie.
The fiction is an interesting mixture of old and new. Among the old as some (presumably) out-of-copyright works. There are not one but two old-time tales of dangerous rodents. 'The Graveyard Rats' by Henry Kuttner (better known today for his science fiction, I think) is an enjoyable tale of a gravedigger who finds himself in difficulties when the eponymous squeakers steal a corpse that he wants to rob. Then there is 'Three Skeleton Key', by George Toudouze. If you would like to hear an old-time radio version starring Vincent Price, have a look on YouTube or the Internet Archive. There's also 'Catnip' by Robert Bloch (more naughty animal antics), and 'The Waxwork' by A.M. Burrage (a minor classic for my money).
There are also three previously published tales by Ramsey Campbell, one of the most respected names in the field. All are enjoyable, as is the interview with Matt Cowan. Re-reading the stories and his answers to '13 Questions', I was struck by how long Campbell has been at the top of his game, so to speak. How quickly time passes. It seems like only yesterday when I heard (on Radio 4, of all places) about a young writer from Liverpool and heard a reading from his novel The Parasite. A lot of dark water has passed under the bridge since then.
Read more »
- July 15, 2022 No comments:

Christopher Lee reads Edgar Allan Poe: The Fall of the House of Usher