Worse Than Myself - Review 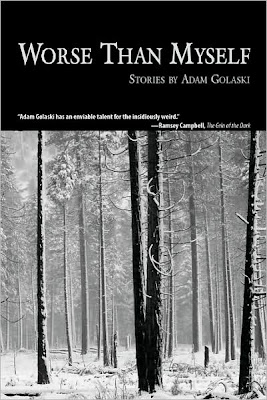 A somewhat late review, this, for the second edition of a remarkable book. Adam Golaski is a poet, and while many poets have written short stories relatively few have written tales of the supernatural. Walter de la Mare is generally considered to be the main man in this regard, but he is also deemed rather challenging – perhaps a bit too elliptical, seldom doing the decent thing and saying what he means. Stories like 'Crewe' and 'All Hallows' do not grab you by the throat. Well, here's another poet who shows no interest in writing slick horror stories that you forget as soon as you finish them. They make demands on the reader, and offer no simple pay-offs.

That said, the subject matter in Worse Than Myself is often very straightforward. A diverse bunch of passengers on a Greyhound bus have strange dreams heralding a nightmarish experience; a family stop for a break during a long drive and find a strange museum; someone goes to a party and hears talk of strange cults before making a disturbing discovery. But the style, the execution, the refusal to offer up a warmed-over and simple explanation or denouement – these are marks of quality in my book. (My book may be a rather obscure and dusty one, I admit.)

Reviewing a collection of short stories by a poet makes me feel inadequate. So let me try to construct a poem of sorts from the carefully-weighted phrases the poet has chosen to include. This is not an original idea. I believe it was pioneered by someone called Mo Truvay.

Mathilda was on the ceiling

'Snow in December,' she said. 'How perfectly unusual.'

Hanging from the trees are long, filmy shreds of white cloth

'Some of the towns out here are riddled with underground passageways'

When the undergraduate dropped down onto all fours, its blond hair brushed the floor

Okay, somebody complained  that the blog is hard to read. So far as I can see it's easy to read with Firefox, Chrome and Opera. So maybe it's a problem with Internet Explorer, or perhaps Macs? Please let me know if you have problems with this, gentle reader. Assuming you can read this at all, of course.
- July 17, 2011 7 comments:

Cold Hand in Mine

If I had to pick a favourite book by Robert Aickman, it would be Cold Hand in Mine. I suspect it will sell rather well, even to those of us who bought the original Tartarus two-volume Aickman, back in the day.

CHIM was the first book by Aickman I'd read, and I well remember seeing the Robinson paperback edition on a shelf in WH Smith's. I pondered whether to buy it, because it seemed to be outside the normal horror genre, but not fantasy or sf. I didn't buy it, but later found a library copy and finally encountered Aickman's strange dreams of... Well, what? Life, death, truth, art.

Perhaps the secret of the man's appeal is that his stories defy analysis. That said, some stories are less baffling than others. 'The Swords', with its run-down funfair and fishnet-clad temptress called Madonna, seems to share some DNA with New Wave science fiction of the sort produced in the Seventies by M. John Harrison. 'The Same Dog', 'The Hospice' and 'Meeting Mr Millar' all struck me at the time as brilliant, particularly 'The Hospice'. Almost as impressive are 'Niemandswasser', 'The Real Road to the Church' and 'Pages from a Young Girl's Journal'. 'The Clock Watcher' is oddly memorable, too, perhaps because it seems so simple but leaves this reader baffled as to what - if anything - the reader is supposed to take from it. But that's Aickman, I suppose.

Back in the Seventies, the BBC decided to televise all of Shakespeare's plays. Tartarus Press has set itself a slightly easier task - printing all of Robert Aickman's books. But Aickman does enjoy an almost Bardic status among many modern writers and readers. Love him or resent him, there he is, one of the few writers in the horror genre (or near it) to deserve the over-used accolade 'unique'.
- July 14, 2011 6 comments:

Hello again. Just a quick update on the back issue, erm, issue. I still have plenty of more recent issues, and they still cost a fiver each (inc. p&p) if you're in the UK. If you're overseas it's a mere ten USD or your local equivalent. I'll have to do a bit more to jazz up the blog page on this, however, giving listings of stories, cover pics etc. But from issue 8 onwards, ST is still available.
- July 13, 2011 No comments:

Work on Supernatural Tales 20 continues apace at Valdemar Towers. Plus, there's a bit of a surprise in store for subscribers later in the year - not a nasty one, or at least I hope not. I'll got out on a partially sawn-through limb and say some of you will be delighted. A bit. Probably.

Anyway, let's focus here and mention American author Brian Day, whose story 'Good for the Gander' is just one of the treats in store in the next ST. Brian has his own site, Disturbing Daydreams, which offers you  the chance to read several of his short stories. There are also longer works, and Brian informs me that he's just uploaded a 'novella' of nearly 200 pages. Sounds like a novel to me, Brian! Anyway, it's called Red Horse and it's right there, just waiting to be read, or ridden.