Fans of supernatural fiction won't need to be told that Steve Duffy is one of the best British short story writers working in the genre today. I've just taken delivery of his new collection, Tragic Life Stories (Ash-Tree Press) and it will be reviewed in ST19. It's getting plaudits far and wide, and I suspect you'll have to be quick if you want to bag yourself a copy. Steve early fiction was published by Ro Pardoe in Ghosts & Scholars. That's what you call a ringing endorsement in the trade.
- October 23, 2010 No comments:

Helpful ghosts and friendly fairies in paranormal 'hotspots' across the UK


The Supernatural Angel Report also uncovers a series of 'hotspots' - where guardian angels and fairies seem to congregate in the UK after scouring police and council records.

The report into 'angelic paranormal activity in the UK' found that in the past 25 years there have been a staggering 755 official reports to cops and councils in the UK.

Hotspots of 'good' paranormal activity include the historic village of Croston in Lancashire, where there have been 44 official reports of fairies living in the nearby woods.

How do you report a fairy to the police? Don't answer that, as any reply would inevitably take us into the realm of the Seventies club comic with a big red face and a shiny suit. But there's more.

The report notes that there have been 755 documented incidents in the past 25 years, ranging from healing and helpful entities, to visions of angels and animal spirits.

Another hotspot is St Martin's Church in Westmeston in Sussex where there are dozens of reports of a friendly phantom drifting across the churchyard.

Well, there you have it. The possibly-Reverend Lionel Fanthorpe, ghosts, fairies, official reports. Ghosts and fairies and angels, all doing well in the 21st century.

John Hurt is to star in the new BBC ghost story for Christmas. I'm quite pleased. Except, of course, that 'Whistle and I'll Come to You' has been adapted before. And Jonathan Miller's black and white 'Omnibus' drama, starring Michael Hordern, is pretty damn good. So we have two great British actors vying to 'do' Professor Parkins. I wonder if Neil Cross, who's scripting the new one, has read the original story? Because MR James clearly says that Parkins is a young man. Oh well.

But why not make a TV drama from a good literary ghost story that has yet to be adapted? Some thoughts off the top of my head:

'Thurnley Abbey' by Perceval Landon - a bit crazy, this one, but fun, and needs a young cast. Also, great scope for dead nun FX, which is always a plus.

'Man Size in Marble' by Edith Nesbit - cruel, 'modern' story with a good payoff. Perhaps a bit too simple and predictable, but the setting is atmosphere.

'The Room in the Tower' by E.F. Benson - one of those between-the-wars jobs, with a good atmospheric dream-horror feel. Scope for imaginative direction.

'The Seventeenth Hole at Duncaster' by H.R. Wakefield - again, pre-war, but more 'realistic', and the golfing theme is nice and quaint. Slightly weak ending, perhaps.

'All Hallows' by Walter de la Mare - tricky one to film, perhaps, with just two characters talking. But weird stuff occurs and again FX of a subtle sort might be rather neat.

And that's before we consider MR James stories yet to be adapted. 'Count Magnus' and 'Wailing Well' both strike me as eminently scary and suited to a nice winter's evening on BBC2.

I try to keep an open mind about 'real life' ghosts, though I always find the fictional kind more satisfying. If you like haunted houses, though, I recommend Ghostwatching's YouTube channel. This one might have been sponsored by various tourist bodies.

I love old radio drama from the pre-TV age, especially horror and sci-fi stuff. Weird Circle is one of many American series collected and available for download or online listening at Old Time Radio. Weird Circle seems to have specialised in the Victorian classics - as well as a lot of Poe (including the comparatively obscure 'Oblong Box') you get a fair old wodge of Wilkie Collins, a bit of Dickens, Maupassant, Bierce, and even Bulwer Lytton's 'The House and the Brain'. There are also some earlier Gothic works, notably the Spectre of Tappington from the Ingoldsby Legends, and a brave stab at a dramatisation 'The Ancient Mariner'. Check them all out here. Other good shows to try are Escape, and The Black Mass.
- October 15, 2010 5 comments:

Subscribers to ST, fear not. This is the week they get posted out, and will no doubt be whisked to you with consummate efficiency. Hope you enjoy the stories. Let me know what you think.

Excellent stuff at The Obscure Hollow

TOH is dedicated to 'Haunted Film Decor and More'. It's a very good blog, offering images from classic 'spooky' movies, many of them overtly supernatural. Just discovered it, by pure chance. Check out Pip and his tormentors below. 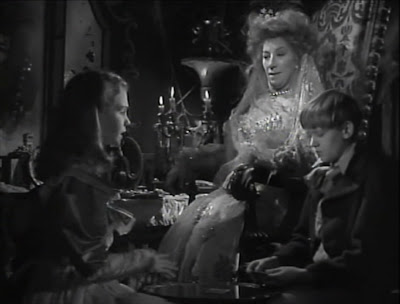 Next week, Radio 4's regular film prog look at Night of the Demon (aka Curse of the Demon). That's all I know at the moment, but I'll be available on iPlayer. Judging from Francine Stock's comment, it might rehash the controversy over whether the demon should have been shown so clearly.
- October 09, 2010 No comments:

ST18 has entered the building

Right, the easy part is over.

The part that involves reading stories, mulling over their good and bad points, accepting/rejecting the cherished offspring of authors, breaking the news that there's an 18 month (at least) gap between acceptance and publication, editing and proofing the stories, supplying reviewers with review copies, faffing about online print-on-demand publishing, actually paying for the thing to be printed. Probably a few other things.

All that stuff is as child's play compared to the dread gauntlet I must now run - postage. But rest assured, subscribers, I will get the latest issue to you, whatever it takes. Just don't hold your breath.
- October 06, 2010 2 comments:

The old website for Ghosts & Scholars (an invaluable source of info on all things MR James related) has been embalmed for some time. Fortunately there's now a new web address - the site has returned from the dead, like Count Magnus or similar.

So why not mosey on over there to see what Ro Pardoe and the James Gang are up to?
- October 06, 2010 No comments:

Naxos Audiobooks have released a new collection - Ghost Stories of an Antiquary. It's not, in fact, the whole collection, but that's not altogether surprising - I don't think any audio publisher has done the lot, or at least not yet. The readers are David Timson and Stephen Critchlow. You can hear an audio sample from 'Canon Alberic's Scrap-Book' on the site. Download cost is £11.
- October 02, 2010 4 comments: