Showing posts from February, 2021
Show All

Crooked Houses - 'The House of the Mere' by John Gale

- February 24, 2021
John Gale's contribution to this anthology of haunted house tales is remarkable for its technical assurance, and its intense imagery. The plot is relatively simple. Philip Peregrine (a name that would not be out of place in any English ghost story penned in the 1890s) goes to an isolated country house, Tarn Ghyll. He writes letters to a friend and keeps a journal. He is enchanted by the beauty of weather and landscape - the story is replete with lapidary words to describe the delights of the British climate, a tour de force in itself. The pages almost glow with richly textured descriptions of a world that seems both real and Romantic in the original sense of wondrous and dangerous.  It becomes clear that Peregrine is not truly alone. A strange entity that seems to be part of the watery environs of Tarn Ghyll is interested in him. He is fascinated by her, concluding that she is a Naiad. But what traditionally occurs when a mortal becomes involved with a water sprite? Suffice to say
Post a Comment
Read more

I've got a new book out! 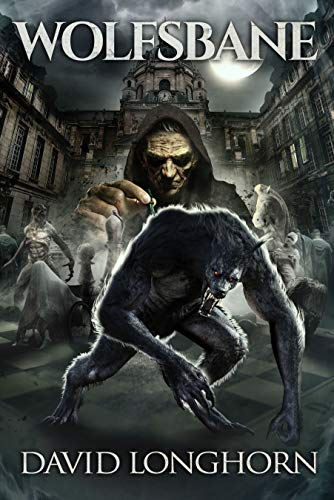 Available for pre-order on Amazon. My Amazon author page is here . Gosh, what a lot of things I've written, and no mistake...
Post a Comment
Read more

'The Mezzotint' - a Ghost Story for Christmas! 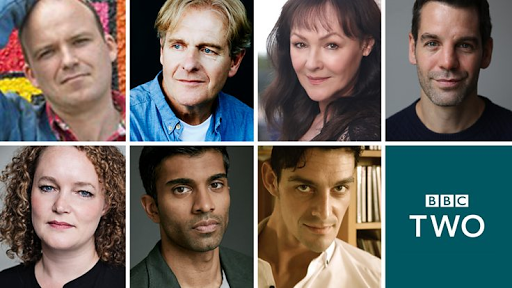 That Mark Gatiss chap is at it again, with an adaptation  of another M.R. James classic.  'Laced with M. R. James' trademark terror, The Mezzotint will guarantee a chill in the air for viewers this Christmas. 'Rory Kinnear (Years & Years, No Time To Die) stars as Williams, alongside Robert Bathurst (Cold Feet, Downton Abbey) as Garwood, and Frances Barber (Doctor Who, Semi-Detached) as Mrs Ambrigail. The Mezzotint also stars John Hopkins (Poldark, Lucky Man), Emma Cunniffe (Roadkill, Unforgotten), Nikesh Patel (Four Weddings and a Funeral, Indian Summers), and Tommaso Di Vincenzo (Dracula).' I assumed when I first saw this item that it was a planned production - but they're already got it in the can. 'Filming wrapped recently in the South of England. The Mezzotint will air this Christmas on BBC Two and BBC iPlayer.'
Post a Comment
Read more

"The Door in the Wall" by H G Wells 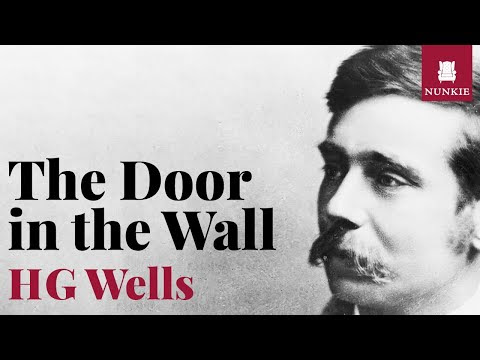 Robert Lloyd Parry gives a live performance of one of my favourite stories - and, for my money, one of the best storiies ever written in English.
Post a Comment
Read more 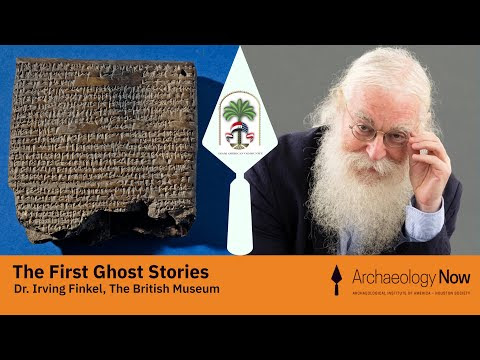 - February 17, 2021
We return to the US for the next story in this anthology from Egaeus Press . The story is told from the perspective of a clergyman's son who begins by recalling his father's habit of telling a spooky tale to kids on a bus ride. The storytelling has to end when one boy commits an atrocious crime. Later, at university, the main character encounters an older student who is doing research into similar stories. They talk to someone who has visited a strange house, but did not go inside.  This is a story about stories, about the way the haunted house always exists. In a way, the houses in a million anecdotes are all that same house, one that can never be truly located or explored. Or at least, not in such a way that the legend is debunked, or confirmed. It merely persists. Attempts to establish facts fail, because the legend protects itself, guards its unfathomable truth with cunning and ferocity. Thus the narrator survives his visit to the house but knows that he has only been grant
Post a Comment
Read more 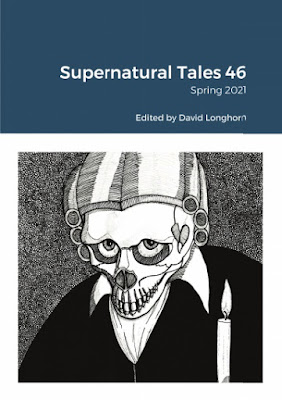 - February 14, 2021
We move on to another in this impressive Egaeus Press volume, and a house haunted in a manner that's almost, but not quite, traditional. I remember (but only just) when Reggie Oliver submitted one of his earliest stories to me and being impressed by his carefully-crafted prose style, which recalls the inter-war 'Silver Age' of the ghost story, exemplified by Benson, Wakefield etc.  In 'The Crumblies' we find a prosperous family buying a country house formerly inhabited by two sisters who creatued much loved children's stories. The Crumblies are biscuit-people magically wished into existence to entertain lonely youngsters. However, as the new owners of the house explore, they discover that the sister who illustrated the tales the other wrote took the seemingly harmless creatures down a distinctly sinister path. The haunted house theme is well-handled and the central idea is strong. If I have a reservation it's that the ending is somewhat pat, but that's
Post a Comment
Read more - February 10, 2021
Just read another story from this Egaeus anthology, and it's another contribution by an ST regular. Steve Duffy takes the haunted house theme and runs with it to a place many might find surprising - the US on Christmas Eve, 1944. For those of us who know the man and his work, however, it's not unexpected. And as always, the period detail and the narrative voice are spot-on. The narrator is a young man recalling a very bad Christmas indeed. His mother, a faded southern belle of uncertain temper, becomes obsessed with the idea that he beloved brother needs to contact her immediately. Given that he is serving in the Pacific, this seems improbable, but the mother is insistent. The boy's long-suffering father is bullied into driving her and their two sons hundreds of miles back to her family's old-style Southern mansion, where the wonderfully-named contrivance of the title lurks in the attic.  If you don't know what a psychomanteum is, finding out is fun! Suffice to say
Post a Comment
Read more

'Creeping Forth Upon Their Hands', Part Two. 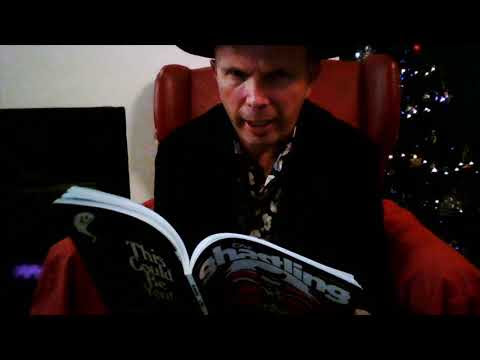 'Creeping Forth Upon Their Hands', Part One. 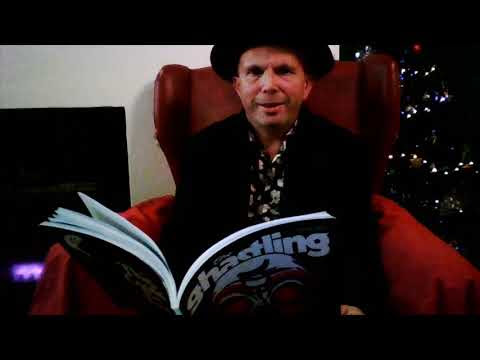 'Part One of a Ghost Story about Sir Edmund Spenser's attempts to impose order in the Munster Plantation in Elizabethan times, and his encounter with the spectral Hand Walkers...'
Post a Comment
Read more

- February 07, 2021
The third story in this reprinted Egaeus Press anthology (I'm working from a pdf btw) is by long-term ST contributor Helen Grant, so I need hardly point out that it is good. Perhaps I should add that it's good in several ways. The writing is top notch - economical, unpretentious, but conveying just enough detail to give a very clear sense of place. The way in which she takes a folk story and doesn't simply end with 'Argh! The monsters got me!' is also impressive. Best of all is the deftness with which she focuses on just one character for the entire tale, recalling some of the best weird fiction of the past. The story concerns Rory, a young Scot who is about to leave the country for a new life. He returns to his dimly-remembered ancestral home, which is now a ruin, to spend the night there before flying to America. he explores what's left of the house, finding little of interest other than a blocked window. Rory remembers that a legend concerning beings that ca
Post a Comment
Read more

- February 06, 2021
The next story in this Egaeus anthology takes us to rural England, and a small town beset by a recurring tragedy. Every few years a young person is processed by a strange malady that seems to be supernatural in nature. A mysterious figure known as 'the good shepherd' becomes visible to the afflicted person, as does his house on a hill overlooking the town. This strange being is seen by the victim, gradually approaching their home, until he arrives and claims them. He then takes them back to his dwelling, having hooked them with his shepherd's crook.  This is a fascinating premise, with its odd twist on Christian imagery and its nod to some classics of the genre - such as de la Mare's 'Crewe' - in which a weird menace approaches its victim gradually. The actual story focuses on a native of the small town who, for reasons he cannot fathom at first, escapes the good shepherd and leaves to make his fortune elsewhere. He then returns and purchases a fine house, and
Post a Comment
Read more

- February 02, 2021
The second story in this Egaeus anthology takes us to a family gathering at a large, rural house in the middle of a Canadian winter. Maxine, newly married into the well-to-do Whitlock family, is worried about the reception she will receive from her husband's clan. In the event things go smoothly enough - until she notices something unusual about a small building in the extensive grounds. Strange light radiates from one dirty window. Why does the family matriarch spend so much time in there?  This story proceeds smoothly from a familiar setup to a very strange denouement, as Maxine engages in subterfuge that allows her to find something nasty in the woodshed (to coin a phrase). It's a haunted house tale, in the sense that a paranormal phenomenon is focused on Mrs. Whitlock, though in a rather unconventional way. And just when I thought the story was over, it seemed ready to begin again, with the possibility of another haunting.  A strange tale, then, elegantly written, and one
Post a Comment
Read more
More posts