I am one stressed out Easter bunny at the moment. I feel I am thrashing around and not getting enough done. When I'm tense and anxious I often turn to comedy. And what better than a scientific analysis of ghosts? Amazed I never thought of posting this before:

Yes, I've finally worked out how to actually use Blogger, after a mere 300 years of posting here. I've added a page with prices and some contact details. Now the world has no excuse but to deluge me with currency. And I intend to add more pages, giving more information. Useful information. Probably. You never know. Anyway, you can see link to the price page above this post, next to Home.
- March 29, 2010 No comments:

If it weren't for Ed, where would we be?

Just watched - for the fourth or fifth time - this excellent minor ghost story from director Hideo Nakata, best known for directing the famous Ring. There's a strong family resemblance between the two films, but the overall approach is rather different. Dark Water offers a rather bleak and damp view of life in Japan.

The world of recently-divorced single mother Yoshimi is one beset by troubles, not least a custody battle for her beloved daughter Ikuko. When they move into a new apartment in a run down building Yoshimi is dismayed both by the water seeping through her ceiling and strange experiences that seem to focus on Ikuko. Some of the standard tricks of J-horror are used to good effect, though they are now over-familiar. There's the shadow on the elevator CCTV image, for instance.

The plot is well-handled and the main characters are sympathetic. The performance of tiny Rio Kanno as Ikuko is very engaging and as her mother Hitomi Kuroki manages just the right combination of courage and vulnerability. The actual ghost is of a familiar sort, but the film's climax and its aftermath are satisfying. This is one to rent if you haven't seen it. 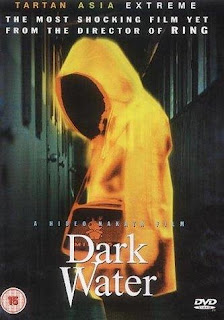 One of the most famous tales of construction-related human sacrifice is associated with Matsue castle (Shimane prefecture), which was originally built in the 17th century. According to local legend, the stone wall of the central tower collapsed on multiple occasions during construction. Convinced that a human pillar would stabilize the structure, the builders decided to look for a suitable person at the local Bon festival. From the crowd, they selected a beautiful young maiden who demonstrated superb Bon dancing skills. After whisking her away from the festival and sealing her in the wall, the builders were able to complete the castle without incident.

However, the maiden’s restless spirit came to haunt the castle after it was completed. According to folklorist Lafcadio Hearn, who described the castle’s curse in his 1894 work “Glimpses of Unfamiliar Japan,” the entire structure would shake anytime a girl danced in the streets of Matsue, so a law had to be passed to prohibit public dancing.

Via the excellent Pink Tentacle. A must for fans of weird Japanese pop culture/folklore/tech stuff and general wackiness.
- March 20, 2010 No comments:

What I should have written is that two stories from ST have been longlisted for the BFS award. Also, the magazine itself is on a longlist! An arcane process known as voting will now whittle away at these lists of worthy things until, basically, somebody else wins, in all likelihood. But it's still good to know people are enthused by ST enough to prod the BFS a bit. And credit due to the writers - Jim Steel and Rosalie Parker - for their hard work and respective creative imaginations. Mind you, all that bribery and blackmail must have played a part, too.
- March 19, 2010 2 comments:

Seance on a Wet Afternoon

I was aware of this story only because of Steptoe and Son doing 'Seance in a Wet Rag and Bone Yard'. What's on offer here is a five six part reading of an abridged version of the original novel. But the reader is Anton Lesser, so that's value added straight away. If there's a better modern voice out there for the strange and menacing I've yet to hear it.

The story is rather disturbing and odd. The basic premise is that Myra Savage is a 'fake' clairvoyant who nonetheless has read psychic powers - she can read minds to some extent. In pursuit of fame, not money, Myra and her husband kidnap the small daughter of a rich industrialist so that they can 'find' her by supernatural means. Needless to say, things go badly wrong. But as I've yet to finish listening to it, I'm not sure what...
- March 13, 2010 2 comments:

It's with great pleasue that I've just today learned of the nomination of two (2) ST stories for the British Fantasy Awards. The stories are from ST 15 and 16. They are Rosalie Parker's 'The Picture', and Jim Steel's 'Red Christmas'. ST's profile keeps going up and up thanks to the efforts of people like Rosalie and Jim. Thanks chaps, well done, and good luck.
- March 12, 2010 No comments: 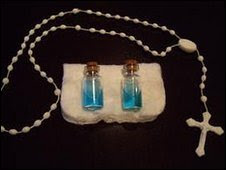 I always thought of New Zealand as quite a sensible place, full of sheep, orcs, trolls, and various forms of Kiwi. But now it seems New Zealand is as loopy as anywhere else.

The auction, which ended on Monday night, attracted more than 200,000 page views on the Trade Me website...

The closing bid went to a company called Safer Smoke NZ, which produces electronic cigarette substitutes - it paid NZ$2,830 for the two bottles.

The company said it was now inviting suggestions as to what they should do with the ghosts.

Typical. An electronic cigarette company comes home from the pub, goes online, bids for something it doesn't really want, then appeals for suggestions as to what it should do with two ghosts.

Well, for a start, you could try and put them in the same bottle and see if some weird quantum effect prevents it. Or you could train the ghosts to do simple household chores. Then there's spying for fun and profit, as they're invisible and can pass through walls. The possibilities are almost endless.
- March 09, 2010 No comments:

Ray Russell of Tartarus Press sent me the following:

Dear friends, Please take a look at this: http://www.38degrees.org.uk/BBC-stop-the-cuts

The BBC is under pressure from its commercial rivals to make massive cuts. It's expected this week to offer to cut two radio stations and half its web site, but Rupert Murdoch's still demanding even more - he even wants them to cut Radio 1. Public pressure can stop the corporate media barons getting their way and persuade the BBC to put its viewers and listeners first. Please help add to the pressure by signing the petition here:

All the best, Ray

I have signed the online petition. While I have my reservations about the BBC, especially the unfair licence fee, I detest the lowest-common-denominator garbage of big corporate media. Yes, free enterprise is a wonderful thing - in its proper place. But let's remember that free enterprise in broadcasting effectively means the big guys usually clobber the little guy.

If we had a real free enterprise approach to broadcasting anyone could broadcasting anything at any time - let the consumer decide what to watch or listen to. Ah, no, Mr Murdoch and his overmonied pals would rather make sure the rules of the game re: frequencies, licenses etcetera, are rigged by the state. In favour of guess who? Oh, I forgot to mention Silvio Berlusconi. He's another one.

So until Rupert, Silvio and their ilk accept genuine free enterprise (and abandon such nasty, market-restricting statist concepts as copyright, for instance) I'm for the BBC as a gold standard of good journalism, good drama and good comedy. 'Good' in this sense shall be taken to mean 'about fifty times better than commercial TV and radio'.
- March 04, 2010 2 comments: