Issue 50 - About the Authors

S.M. Cashmore is a proofreader, editor and writer based in Ayr on the west coast of Scotland. His novel Kindred Spirit was published in 2019, and a second book is slated to come out late in 2023. His short stories have been reproduced in various places, but he is always delighted to place one with Supernatural Tales, especially in this historic fiftieth issue. You can track him down at stephencashmore.com or cashmoreeditorial.com.

Chloe N. Clark is the author of Collective Gravities, Escaping the Body, and more. Her short story collection, Patterns of Orbit, is forthcoming in 2023. When not writing or working, she has amassed an impressive collection of opinions about Oreos. Follow her on Twitter @PintsNCupcakes

Paul Crosby is a software developer with a background in high energy physics. His work encompasses the fantastical and uncanny, and the consequences of terrible deeds. He also writes fiction. He currently lives in Reading.

Sam Dawson is a journalist. Published by Supernatural Tales, his debut collection, Pariah & Other Stories, is available from lulu.com

Steve Duffy's most recent collection, Finding Yourself In The Dark, was published by Sarob Press in 2021; he's currently at work on the next. This story was inspired in equal measure by Paul Fussell's The Great War And Modern Memory and PJ Harvey's "Let England Shake".

Helen Grant has a passion for the Gothic and for ghost stories. Joyce Carol Oates has described her as "a brilliant chronicler of the uncanny as only those who dwell in places of dripping, graylit beauty can be". A lifelong fan of the ghost story writer M. R. James, Grant has spoken at two M. R. James conferences and appeared at the Dublin Ghost Story Festival. She lives in Perthshire with her family, and when not writing, she likes to explore abandoned country houses and swim in freezing lochs. Her novels include Ghost (2018) and Too Near the Dead (2021).

Lynda E. Rucker has sold dozens of short stories to various magazines and anthologies including Best New Horror, The Best Horror of the Year, The Year's Best Dark Fantasy and Horror, Black Static, Nightmare, F&SF, Postscripts, Supernatural Tales and Shadows and Tall Trees. She has had a short play produced as part of an anthology of horror plays on London's West End, has collaborated on a short horror comic, writes a regular column on horror for Black Static, and won the Shirley Jackson Award for Best Short Story in 2015. Two collections of her short fiction have been published, The Moon Will Look Strange and You'll Know When You Get There, and she edited the anthology Uncertainties III for Swan River Press. 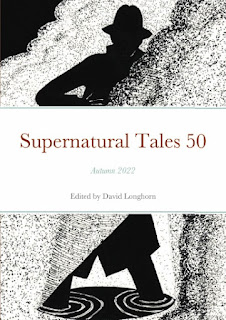 RIP Peter Straub (1943-2022). If you don't know the only(!) Hollywood movie based on his work, check out Ghost Story. It has been somewhat neglected, which is unfair. It's an excellent ghostly horror film.
- September 07, 2022 1 comment: