Showing posts from February, 2010
Show All

In which I receive a postcard 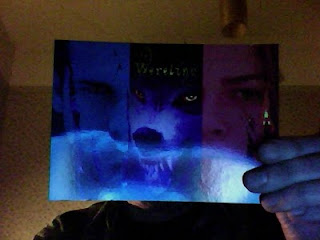 Cardinal Cox, the Poet Laureate of Peterborough, sent me a nice (i.e. terrifying yet oddly sexy) postcard thanking me for reviewing his excellent poetry pamphlet, Carrion Crimson. This will be formally launched at (or among) the World Horror Convention in Brighton next month. The Cardinal also kindly asks if he can help distribute flyers at the con. Not necessary, I reply, for my trusty leather-clad sidekick colleague, Kate Haynes, will be there, and will have a sheaf of flyers to distribute. These flyers are what we experts call 'commercial suicide' as they offer anyone who can simply fill in their name and address a free sample copy of ST. I must be mad. Mad, I tell you. Oh, here's the postcard.
Post a Comment
Read more 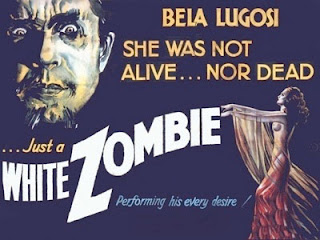 The writer David Surface (hello!) sends me a link to his excellent website, which is chock-full of stories, essays and much other stuff. There's a wonderful bit of nostalgia about the old black and white 'horror' films that, by modern standards, don't seem so much horrific as weirdly stylised - as if they've somehow been translated from some forgotten cinematic language. Which I suppose they have. To this day I wonder who was the person at our local TV station who decided that 5:30 AM on Saturday was the perfect time to show every horror movie from the Universal Studios vault. The ungodly hour and the darkness contributed to my vague feeling that there was something subversive, almost indecent about these films. It did not occur to me that they’d been ghettoized, that these movies were (at the time) considered not classics, but garbage, filler between fishing shows and the morning news. But to me, the hour was holy. Laying on that scratchy old living room rug i
Post a Comment
Read more

- February 20, 2010
For Thornavis, and others - Susan Penhaligon, and everyone else who was ever in a British film in the Seventies. Plus a lorryload of pussy...
2 comments
Read more

- February 18, 2010
Not, strictly speaking, half-lizard half people, but still pretty damn Fortean. Have a gander at this , on the excellent Strange Maps blog. (LA Times, 29 Jan 1934) By Jean Bosquet Busy Los Angeles, although little realizing it in the hustle and bustle of modern existence, stands above a lost city of catacombs filled with incalculable treasure and imperishable records of a race of humans further advanced intellectually and scientifically than even the highest type of present day peoples, in the belief of G. Warren Shufelt, geophysical engineer now engaged in an attempt to wrest from the lost city deep in the earth below Fort Moore Hill the secrets of the Lizard People of legendary fame in the medicine lodges of the American Indian.   So firmly does Shufelt and a little staff of assistants believe that a maze of catacombs and priceless golden tablets are to be found beneath downtown Los Angeles that the engineer and his aides have already driven a shaft 250 feet into the ground, th
Post a Comment
Read more

- February 16, 2010
A good Ronald Frame dramatisation of Daphne Du Maurier's original short story can be heard here . Having just watched the 1972 movie, I was impressed by how well it was adapted for the screen. The strange events that take place in Venice are genuinely disturbing because there's none of the usual horror movie stuff. Instead there's the odd attitude of the bishop, the church restoration, the apparently dotty old ladies, confusion with Italian hotel staff etc. The climax is still insanely troubling.
Post a Comment
Read more

It's not a drag! Gosh, what a witty opener. Sam Raimi's 2009 horror movie sort of passed me by at the time, but I've found a window in my immensely busy schedule to view that the young folk call a DVD of this cinematic offering. And I enjoyed it. The basic structure of the movie bears a surely-not-accidental resemblance to that of Curse/Night of the Demon. We begin in 1969 by seeing someone literally dragged to hell by a demon, then we jump forward to find modern day bank worker Christine Brown (Alison Lohman) having a tough day. She is told by her boss that, if she wants to get that vital promotion, she needs to show she can be tough as well as smart and efficient. So - you guessed it - Miss Brown is tough with an old gypsy woman whose house is being repossesed. And wackiness ensues. The basic conceit of M.R. James' 'Casting the Runes' is adhered to here, as in Jacques Tourneur's post-war classic. But in style and mood DMTH couldn't be more differe
Post a Comment
Read more

- February 12, 2010
This mini-series, helmed by critically-rated writer-director Joe Ahearne was shown on Channel 4 in 1998 and set an unusually high standard for a British horror-fantasy-thriller. As my terminology suggests, Ultraviolet is one of those genre-spanning jobs, and - having just watched it again after a good few years - seems all the better for it. The plot is of a fairly familiar type. Honest London cop Mike Coleman (Jack Davenport) is at his best friend's stag night when he receives a call from an informer who claims his life is in danger. Mike reluctantly decides to help, but the informer is already dead by the time he finds him. The assailant - who has gunned his victim down in a busy amusement arcade - disappears. This is strange, as the killer apparently went into a Tube station, but doesn't appear on any CCTV footage. Stranger still are events the following day, when Mike's friend Jack doesn't turn up to his wedding, putting a bit of a crimp in the day of the bride
2 comments
Read more

- February 11, 2010
Right, I've read it now. As always, Cardinal Cox delights me with his erudition. Had you heard of the Vinca people, or the Dacian sage Zalmoxis? Playful, witty, and often moving, these poems are really not so much about vampires - though there's a full set of teeth here, never fear - but about our own strangely inhuman humanity. We are the monsters; creatures who cannot see ourselves in the mirror of the world. Monsters who subsist on the lifeblood of others, yet remain bloodless and heartless, and shrink from the sun. God I'm morbid sometimes. Anyway, here's a little extract from an atmospheric Wells tribute, 'Strange Orchids': In the yellow of the evening light Hothouse reveals a tumescent sight Heady scent which invites to drowse She fumbles buttons on her blouse Warning: disturbing words like 'blouse' appear throughout these poems. Apparently the Cardinal can now be found on Facebook, too. He's getting out there.
Post a Comment
Read more 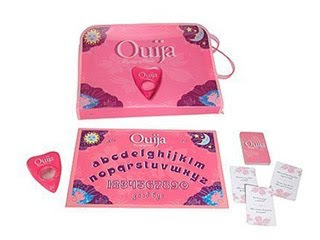 Some of the usual US nutcases are up in arms over a ouija board. Not because it's pink - which seems to me very questionable - but because it might endanger the souls of children. This is reminiscent of poor, dead Dennis Wheatley's earnest admonitions to stay away from Satanism, because it can do you terrible damage. Your head spins round, green stuff flies out of your gob, and you are very rude to clergmen. Which is why you should not buy your niece one of these to go with her Disney Occultist outfit... Wow, that is pink. Here's what some bleating imbecile has to say about this piece of pretty pink nonsense. "There's a spiritual reality to it and Hasbro is treating it as if it's just a game," said Stephen Phelan, communications director for Human Life International, which bills itself as the largest international pro-life organization and missionary worldwide. "It's not Monopoly. It really is a dangerous spiritual game and for [Hasbro] to
Post a Comment
Read more 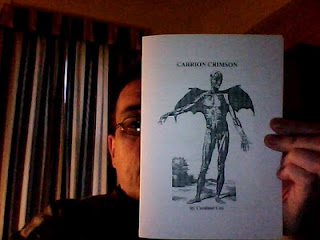 Cardinal Cox has produced another pamphlet of poems, this time for the World Horror Convention, which is being held in Brighton next month. This is me,  holding up the review copy of Carrion Crimson. Yeah, holding it up like a doofus. What's it to ya? More on this later, because I just got in from work and I'll have to read the poems and stuff. Thanks to the Cardinal for keeping me in the loop.
1 comment
Read more 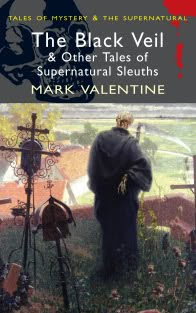 There's nothing nicer than dipping into books of short stories, is there? Well, nothing I can writre about here without being put behind one of those content warning thingies. And one undeniably good thing about modern publishing is there are firms that specialise in putting out cheap editions of ye olde stories that otherwise might be hard to obtain. Which brings me to Wordsworth's nice series of  Tales of Mystery and the Supernatural. I bought three paperbacks in the series for considerably less than a tenner. I employed an internet vendor which, as I must avoid advertising, I will call Orinoco.co.uk. Two of the books are edited by Mark Valentine. Mark is also editor of the excellent journal Wormwood, which you can buy via Tartarus Press here. An erudite and very knowledgeable connoisseur of the supernatural tale, he's also an original and insightful author. The two books in question are The Werewolf Pack, and The Black Veil &  Other Tales of Supernatural Sleuths.
5 comments
Read more