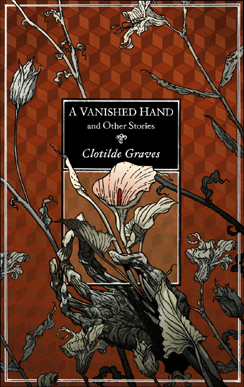 This handsome volume collects some of the weird tales of a remarkable woman who first enjoyed success in the theatre, only later moving on to become a short story writer and novelist. Clotilde 'Clo' Graves (1863-1932) was born in Cork but spent much of her working life in England. In her forties adopted the pen-name Richard Dehan and also followed the fashion of quite a few literary and artistic ladies by adopting male attire. For the last few years of her life she lived in retirement in a Middlesex convent.

It's interesting to note that her first work for the stage was entitled Nitocris. The Egyptian queen who bumped off her enemies was also the anti-heroine of the first short story by another playwright, Tennesse Williams. And, before she gained a reputation for gothic and ghostly fiction, she had helped adapt Rider Haggard's She for the stage. Haggard may have been one of the major influences on her work.

The stories in this collection certainly include a few examples of what is termed 'Empire Gothic', accounts of British colonial doings that trigger strange and occult events. This is particularly true of 'The Mother of Turquoise', in which a British expedition finds a rich vein of the eponymous stone near a temple of the Egyptian goddess Hathor. The story developes into a lurid tale of human sacrifice and mystical shenanigans. A central figure, an aged African witch woman, is very similar to Gagool in King Solomon's Mines.

'The Great Beast of Kafue' is also set in Africa, though here the scene is Rhodesia not long after the Boer War. It foreshadows two other stories, Bradbury's 'The Fog Horn' and Sarban's 'A Christmas Story'. A young Afrikaner reads a newspaper account of a mysterious, long-necked beast allegedly seen somewhere inland of his farmstead. He longs to hunt the beast, but his father makes him promise not to kill it. Then the truth about the creature is revealed.

The description of the dinosaur-like beast is extremely good and made me check the publication date. The story was first collected in 1917. Claims that a cryptid somewhat like a plesiosaur - mokele-mbembe - first appeared in 1909. If Graves story first appeared in a magazine before that date we could have situation similar to that of Machen's 'The Bowmen'. More likely, though, she read of claims by the explorer Hagenback and seized upon the idea as a good basis for a story.

Other stories stay closer to the ghost story tradition. Some treat it lightly. 'A Spirit Elopement' recalls Blackwood and E.F. Benson at their more whimsical, as two mediums find their spirit guides basically copping off with each other in a most disgraceful fashion. 'How the Mistress Came Home' is a little overwritten but works nicely along the lines of similar works by E. Nesbit and others. The title story is an interesting twist on the (fairly) Decadent theme of the artist obsessed with a dead mistress, only to face some awkward truths when the lady in question pops up again.

While not supernatural, some stories here do work well as weird tales straddling the boundaries of horror and mystery fiction. 'Lilium Peccatorum' offers a nice twist on the well-cultivated theme of the evil plant, as a mysterious green interloper starts to undermine the well-being of a model British family. Less successful, for me, is 'Lady Clanbevan's Baby', which has a hint of Saki in its approach to fashionable society but doesn't quite work. But the sheer variety of fiction here shows that Graves was an immensely versatile writer, one who could pretty much produce something for everyone.

In an excellent introduction, Melissa Edmundson gives a fascinating outline of Graves' life and times. She points out that Graves' stories often straddle the line between comedy and tragedy thanks to her theatrical background. And it's also interesting to see how important the literary persona of Richard Dehan came to be to the author once she had created him.

Clotilde was a relation of the poet, Robert Graves - I assumed as much, given his Irish connections, so of course I had to go and check.

That's fascinating! It never occurred to me, thanks for pointing that out.