Here we are with the third of four novellas, and we're in the folk horror country. Anyone who knows the sub-genre will recognise the signs early on. Rural England - Lancashire, to be precise. A couple of characters who've never been in this part of the world before. A strange, hand-painted road sign. A crucial date - in this case, November 5th. The scene is set.

'The Hell Wain' sees two London gangsters arriving in a small town to seek out and retrieve - by brute force - an informer living under a witness protection. The have been tipped off that the small-time grass is working in a bookshop in a nowhere kind of place called Hackenthorpe. Back in the 'burning times' of Bloody, a terrible thing happened there. The home-made road sign reading No Popery furnishes one clue, a burned out church another.

The hard men - one old hand and the impetuous son of the big boss - soon find that the town is a place that has known extreme violence of its own. As the plot unfolds, the initially confident hit man, Lassiter, becomes ever more nervous as he realises Bonfire Night is not just an excuse for rocket-related idiocy. Something much more sinister is going on. The mysterious Bonfire Boys are out, pushing a blazing cart called the Hell Wain. The exposition  is very well-done, rooting the story firmly in the ferocious intolerance of the Counter Reformation era.

This another cracking tale, and I'm wondering if the author had in mind a portmanteau horror film when he wrote this collection for Sarob Press. Certainly the feel of each tale (so far) is very cinematic - I wish I could write action sequences half as well as Paul Finch. The story leaves an aftertaste of gunpowder, sweat, and blood. And, as before, there's a sense of authenticity about the details. As a former police officer, Finch knows the ways of gangland far better than most people who write about crime. 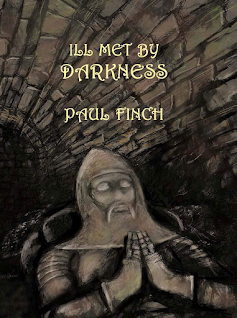