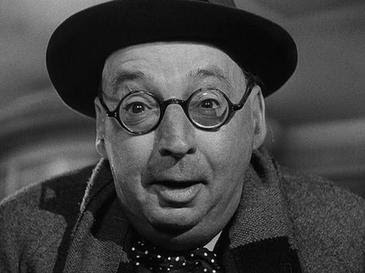 Anyone who loves old Hammer films as I do will be familiar not only with the big stars, but also the regulars of the supporting cast.

Among the latter was Miles Malleson, a stalwart of the theatre who became a familiar face in British films in the decades after WW2. He was often cast as comic relief in the role of butler, undertaker, petty bureaucrat etc. He certainly looked the part, as you can see.

Like Michael Ripper, Malleson is one of those actors I'm always glad to see, even (or especially) if the actual film isn't first rate.

And apparently he was just as amusing to work with as he was on screen, Here's a lovely clip of Peter Cushing and Christopher Lee explaining why. And thanks to the Peter Cushing Appreciation Society for posting this on their Facebook page.