The Moon Will Look Strange 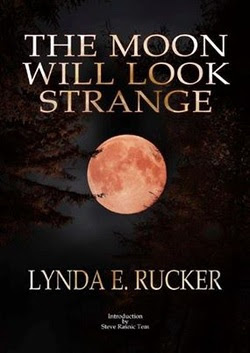 Lynda E. Rucker's debut collection from Karoshi Books includes eleven stories that all fall within the broad category of weird fiction. They are also united by a common sensibility - a feel for loss, and loneliness, that at times makes the the lives of Rucker's protagonists almost unbearable.

Most stories about solitary folk having strange experiences fall into one of three categories. There are fictions in which a lonely individual never makes a connection with another human being - or at least, not a healthy, natural one. Then there are Jamesian tales in which scholarly bachelors seem quite happy in their solitude, until something happens to seriously discommode them. Finally, and most familiarly in the modern American horror story, there is the situation most of Rucker's characters find themselves in - that of suffering loss and being unable to face it squarely, or deal with it in other ways.

Thus in the impressive title story Colin, scarred by the accidental death of his small daughter, finds himself in Granada. In a mainstream story he might slip into a sub-Henry Miller existence as a drunken grifter. But it emerges that Colin sought occult help to try and bring his daughter back to life. The sheer craziness of this attempt, involving a very unpleasant necromancer, is well realised. Suffice to say that the ending wasn't at all what I was expecting.

Equally powerful is 'No More A-Roving', which Steve Rasnic Tem identifies in his introduction as pivotal to the collection. Here we have another unhappy American abroad. Paul, searching for a lost girlfriend who may be somewhere in Ireland, finds himself at a chilly hostel. His failure to connect with his fellow travellers and the mysterious presence of a small boat out at sea are nicely Aickmanesque touches. Eventually Paul finds himself unable to do anything but follow a route that, we are led to believe, other lost souls have taken.

Rucker is exceptionally good at evoking a spirit of place in a few deft lines, quickly establishing her characters as outsiders. In 'The Chance Walker', a young American teaching English in the Czech Republic starts to crack up - or is she the target of ghostly, historical forces? If the past is a foreign country, what strangeness might one not encounter in a foreign country's past?

Not that America is much fun, either. Back home in the USA Rucker's characters fall victim to ghosts and to far less conventional things. In 'Different Angels' a young woman returns to her childhood home in rural Georgia, all sweaty hypocrisy and bible-thumping craziness. Again, the final paragraphs surprised me, not least due to their poetic yet restrained prose.

'Beneath the Drops', by contrast, is set in the rainy Pacific North-West, and is again recalls Aickman, and perhaps Charles L. Grant. The incessant rain permeates the lives of the narrator, Gary, and his girlfriend Gwen. He hates it, she seems drawn to its sound. They grow apart, and Gwen's paintings take on qualities that highlight what might be their elemental difference. (Or I may be reading it all wrong.) The ending is enigmatic yet, as in the best strange tales, also seems inevitable.

Few writers in the genre can resist entering at least one haunted house. 'The Last Reel', which first appeared in ST#10, is an excellent example of the 'unwary couple' theme, in which the characters' love of old movies contrasts with the subtle and insidious danger they encounter. In 'The Burned House' a woman encounters what seem to be conventional child-ghosts, only to discover too late that she has strayed into a place of danger. Here, again, the setting is beautifully evoked and the whole story is told with consummate economy.

For me, these are the most memorable stories in the collection. There are no duds here, but the other stories don't quite have the same impact. You may disagree, of course. One of the virtues of these tales is that, while there may not be something for everyone, there is certainly more than enough to give any thoughtful reader pause to consider loss, strangeness, and fear.

Unknown said…
A wonderful review. I bought Lynda's book and had to ration myself to a story a night because I enjoyed them so much and didn't want the book to end.

I agree that Lynda is able to evoke and amazing sense of place and atmosphere and the haunted house story nearly had me screaming 'don't go in there' and when the silly bugger did, I wanted to scream 'run the hell out'. The last few lines of the story held the tension to the very end.