To the Lit and Phil in Newcastle, last night, to see the redoubtable Robert Lloyd Parry of Nunkie Theatre perform two more classic M.R. James stories. The choice of tales is interesting, pairing as it does the relatively mild but fun 'Number 13' with the much darker 'Count Magnus'. The link is of course that they are both tales of Nordic lands - the first set in the Danish city of Viborg, the second set mainly in rural Sweden.

'Number 13' makes a good opening feature, so to speak, because there are quite a few unforced laughs to be had with Mr Anderson's attempts to communicate in Danish. The most obvious bit of humour - Mr A's somewhat forced concoction of a poem in mock-Gothic style - was omitted. I think that's a sensible edit as it's perhaps a bit too silly, and it allows the story to be tightened up. And, as always, in hearing the tale performed I noticed a few things that I'd forgotten. Anderson catching sight of a bit of the undead baddie's robe as the former leans out of his window, for instance. I really should re-read this one. It's been a while.

The same goes for 'Count Magnus', which is arguably the most horrific Jamesian tale of all. I recall an interview (can't recall if it was radio or TV) in which the late Kingsley Amis praised the story, especially the Swedish innkeeper's description of the poacher who wasn't killed outright:

I think this shows the genuine touch of genius that sets James apart. It's very understated, but it gets the job done more effectively than any amount of 'scary monster' word-painting. 'So he was not dead' is a brilliant line. Robert Lloyd Parry tackled this scene and others without attempting a Swedish (or Danish) accent, which seems sensible to me. It also made me wonder if Monty did try a 'foreign' voice when reading aloud?

It was a good evening's entertainment, and a substantial crowd of Newcastle literati gave the artiste hearty, well-earned applause. As I've said before, if you haven't seen one of these performances you are missing a very special treat. 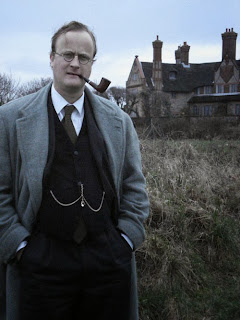