What links the brazen, mechanical head of Roger Bacon, a war waged throughout time, bustles, and the Mummy? The answer - and it's so obvious I'm really surprised you didn't get this - is that they are all to be found in Cognition, a new pamphlet from Cardinal Cox. The Peterborough poet has produced some poems for The Asylum, which is apparently a 'Lincoln convivial'. The theme is steampunk, which is more sci-fi than supernatural, but it's all satisfyingly strange.

Cognition drew its inspiration from a Steampunk Art exhibition held at the Museum of the History of Science in Oxford earlier this year. 'It also borrows from such authors as Brian Aldiss, Max Beerbohm, Lewis Carroll, William Morris and Philip Pullman.' And quite right too. 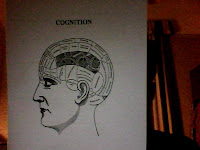 Look, I'm holding it up! The first poem, 'Elias Ashmole's Casket', reveals that 'in a dark, dark cellar' someone finds a remarkable collection of wondrous things. Along with Wilmot's last poems and Shakespeare's first drafts, there is 'Roger Bacon's brassy head', a mechanical thinking machine or mediaeval AI.

'Thus begins our counterfactual adventure', observes the poet. Because the head has been calculating for a while now and a young mathematician called Charles Dodgson is just the man to decipher its secrets and do a bit of judicious reprogramming. Turns out that this odd bit old Androide is the key to time travel itself. And thus the British Empire expands temporally. And no, I'm not giving the plot away. Suffice to say that I love this kind of thing. Oh, and there's a surprising digression into Hammer Horror and Brian Aldiss country that works, somehow.

For more info about everything, really, contact Cardinal Cox at

As well as Cognition, the Cardinal has produced A Sack of Midnight, a collection of poems inspired by the legend of the Mabinogion. Illustrated by Ian Brown, ASoM ('a perfect present for a difficult druid') can be bought for £2.50, cheques payable to Steve Sneyd at the following address: