I recently had the pleasure (?) of watching two comedy horror movies that made me wonder if the genre (or sub-genre) is dead, or at least not feeling very well. The films were Stung and Detention of the Dead, both recent movies using well-worn horror concepts. They weren't terrible - there were some good performances, nicely-done scenes, amusing lines, that sort of thing. But the tone, in both cases, was all over the place.

Detention of the Dead (2012): 'A group of oddball high school students find themselves trapped in detention with their classmates having turned into a horde of Zombies.' So it's a lot like Buffy but nobody has superpowers, and sure enough we have the familiar American high school cast of late teens - there's a Goth girl who likes the nerd, whose into the cheerleader, who in turn is giving blow-jobs to the bully, who has a jock friend who's buying from the stoner. They're in detention when a zombie outbreak occurs, and they're picked off one by one until only two survive.

The movie is, interestingly, based on a play, and was perhaps a little padded for the big screen - some scenes feel as if they've been shoved in to extend running time. The characters have a theatrical feel, talking about their hopes and fears rather too rhetorically for the small town kids they're supposed to be. All of which would be forgiveable if the horror was truly horrific and the comedy was more fun. But one of the key 'funny' scenes involves the nerd getting his balls grabbed by a zombie arm that's then ripped off. Cue much supposed merriment as the stoner tried to pull the arm off. Talky, predictable, and unfunny. Not a stinker, by any means, but a waste of a talented cast. 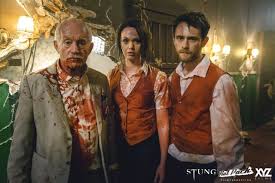 The same can be said for Stung (2015), a German production whose creators could afford to hire three American actors for the lead roles - and one of them is Lance Henrikson. The premise is simple - two caterers arrive at a remote mansion for a big party at which the guest of honour is the local mayor (Henrikson). Mutant wasps created by dodgy fertilizer attack the guests, and do that thing where they lay their eggs inside their victims' bodies. The twist is that the hatchling wasps are the same size as the creature they grow inside, so man-sized insects are produced - in about three minutes flat.

So, all premise of sci-fi plausibility is gone, leaving big wasps killing off a dwindling number of resourceful survivors. The direction is patchy, with Henrikson under-used (he was only available for a week) and much unengaging action. This is one of those films where a monster that can cut through a door is somehow weak enough to be held off by a not-very-big hero. The chase scenes are oddly slow and clunky given that wasps are famously swift and remorseless creatures. Eventually the caterers do destroy the menace, but there is of course a twist ending. I had to agree with the IMDb commenter who stopped following the plot quite early and started noticing structural flaws.


Whatever happened to horror comedy of the order of Theatre of Blood or The Abominable Doctor Phibes? It's tempting to say modern actors, writers, and directors aren't as good as they were 'in the old days', but that's absurd. There's been a respectable horror comedy tradition out there for decades. In 1990 Tremors did an excellent job of reviving the old B-movie concept of the desert community menaced by monsters. The same year saw the spider menace revived by Arachnophobia. There was a decent run of such films around the turn of the century, with Deep Blue Sea, Eight Legged Freaks, and Lake Placid. But these are all monster movies, and I'm struggling to think of something more like mainstream horror that's also reasonably funny.

Perhaps these things go in cycles. I mentioned Buffy above, and that delivered some of the best horror comedy of all time. I was once told that the secret of comedy is to 'think serious, write funny', and maybe that's the problem - people aren't as serious about being funny as they once were.
- April 01, 2016