As an author, Adam Golaski treads the blurred frontier between sourly-witty social realism and the weirdly surreal (or surreally weird). An an editor, he has taken New Genre magazine on a voyage through strange seas of fantasy, horror, and science-fiction, mapping out improbable shores along the way. Well, that sort of thing, anyway. 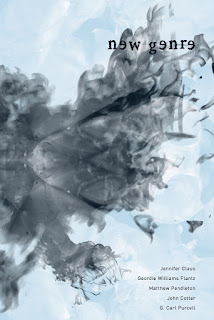 The latest issue contains five stories, ranging from a space war mini-epic to a haunted house tale. If there's a common idea here it's the way that ideas long rooted not merely in genre fiction but in popular culture can be reworked, evolved, or otherwise mutated into something new and interesting.

Thus in 'Parents of the Apocalypse' Geordie Williams Flantz uses the Dos Passos montage approach to recount the end of the world as we know it. Enright, 'a serious amateur astronomer', spots mysterious glowing flakes falling to the Earth from space. Other characters survive and endure the onslaught by chance, by cunning, and perhaps by sheer lunacy. The enigmatic invaders transform humans into zombie-like creatures as part of their destructive life-cycles. I was slightly reminded of Thomas Disch's novel The Genocides, in that the cosmic incursion is so devastating that only an idiot would expect things to ever return to normal. And, sure enough, things can't. Keep watching the skies, by all means, but that can never be enough.

Another traditional sf trope is explored by Matthew Pendleton in his extraordinary novella 'Work Planet Welt Space'. If Robert Heinlein had been intoxicated by the works of James Joyce he might just have produced something a bit like this. The story tells of Hum, recruited from his rust-belt world to become a very minor player in a grand conflict that makes little or no sense, as is often the way of history. It's sobering (for an old fart like me, at least) to reflect that, while Pendleton's quite modest stylistic and formal experiments are familiar, they would still be unwelcome to most sf readers today, just as they were during the New Wave period. This is a pity, not least because he has a genius for word play, as when brutally cyborgised space infantry are officially termed Rotund Chums.

Or maybe I read just too much in the Seventies. I certainly got a James Tiptree Jnr. vibe from 'The Middle-Manager of Pachnout' by G. Carl Purcell. Here is another alien invasion tale, but with the twist that the aliens are a. into progressive rock, big time and b. exude pheromones that wreck our society by making men their idiot slaves and women seriously ill. After our world has been plundered of  all its Yes albums (on vinyl, natch) a grim reckoning takes place. Well, it makes a change from them pinching our water, and the riff on clunky, safe alien occupation tales is a neat one.

Moving on to the maybe-supernatural. we find unreliable narrators. 'The Room is Fire' by Jennifer Claus is set in horror movie territory, and nods to Angela Carter and Shirley Jackson. A little girl called Alexandra witnesses a bizarre disappearance, and nobody believes her story, though her parents are 'too perplexed to question its veracity'. She grows to adolescence and remains fascinated by the spot where the incident occurred. Eventually she is transformed in a manner familiar to students of myth.

'After the Storm' by John Cotter is a haunted house story told in lyrical prose. An elderly couple are awakened by what may be an intruder. The husband investigates and encounters a ghost - or at least, something that might credibly be termed one. In terms of simple incident this is a slight tale, but Cotter skilfully includes a novel's worth of characterisation, beautifully evoking the haunted nature of old age and the difficulty that even the most contented of couples can have over simple communication.

New Genre 7 is, in brief, another excellent mini-anthology of remarkable new writing. I'd recommend it to anyone who takes their literature neat.
- August 01, 2015

I must thankyou for yr review, particularly of my story. I've never felt so understood. I will say more on more blog some time later. As for this " they would still be unwelcome to most sf readers today, just as they were during the New Wave period..." I am working with someone on a manifesto or just simply essay, I dunno yet, to address this matter.

My pleasure, Matthew, I'm glad I discovered your work.

Thanks! Couldn't ask for better company than Tiptree.

My pleasure, Greg - stories like yours make me want to explore more contemporary sf.