A beautifully-produced book thudded onto my doormat earlier today. I'm now halfway through it and finding it fascinating, mysterious and at times a tad alarming.


Glorious Nemesis is a novella by Ladislav Klima, a Czech author of whom Vaclav Havel, no less, wrote:

Ladislav Klíma has been an important "voice calling in the wilderness." His antimetaphysical view of the world was not unique at his time, as Europe was full of followers of Friedrich Nietzsche, both good and bad. Yet Klíma's mix of philosophical essay, fiction, poetry, and drama was unique. Often he was too fervent in proclaiming that the only security lies in the awareness of one's will and of one's absolute freedom. In this way he eliminated the border between truth and fiction, between waking and dreaming, and even between life and death. If the world, from Klíma's perspective, was to be some phantasm or phantom, we would need a new way of articulating it, of creating it anew. At the same time, the main purpose of the world would be inherent in the free and unlimited will, life a game for the free individual. The non-conformist work of Ladislav Klíma has almost always shocked, has often incited scandal, but has hardly ever left us indifferent. One need not accept his view of the world to experience it and enjoy it in all its ambiguity, just as one does the stage.


Having read a bit of Nietzsche in my youth (doesn't everybody?) I can see that Klima (whose dates are 1878-1928) was profoundly influenced by the much-misunderstood prophet of the Superman. Klima's protagonist, Sidar, is arguably 'beyond good and evil', but not beyond love and fear. As the story developed the paradox of unlimited free will also becomes apparent, as the greatest happiness, or at least the greatest sense of being alive, comes with obsession and a conviction that fate cannot be avoided.

Indeed, as I made my way through the first chapters of Glorious Nemesis (which can be ordered from Amazon) I was reminded somewhat of Klima's contemporart Algernon Blackwood, especially 'The Glamour of the Snow'. Here we have the same lonely protagonist (Sidar seems to be utterly alone in the world, devoid of family or friends) and the same love of outdoor pursuits, especially walking and climbing. Klima doesn't seem to embrace Blackwood's pantheism, however. Instead Sidar, on visiting the Alpine resort of Cortona, enters a realm that is neither wholly wakeful nor entirely dream-like when he falls in love with a mysterious young woman who seems likely to lure him to destruction.

As I haven't finished this short novel I can't say whether it qualifies as a ghost story or not. I suspect that, as in HG Wells' The Croquet Player, the author's intention goes beyond those of the conventional ghost story, but the ingredients he is using are familiar. What is unusual is the intensity of Klima's focus on one man and his obsessive vision of a nameless woman who may be a ghost, a demon or something even stranger. It is always difficult to judge a translation, but I think Marek Tomin has conveyed much of Klima's strange power. It is also, as I mentioned above, a beautiful book in its own right, with a superb cover and illustrations by Pavel Rut. It is published by Twisted Spoon Press in Prague. 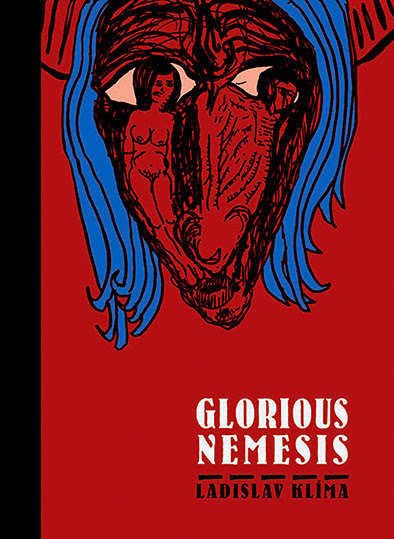