The Lure of the Unknown - Essays on the Strange, by Algernon Blackwood (Swan River Press 2022) 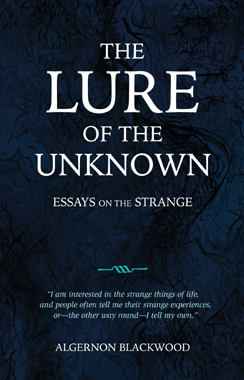 This collection of short pieces - some are just two or three pages long - is a delight. I like non-fiction books one can dip into and ferret around in, and Blackwood's occasional pieces are ideal for this. Some are previously unpublished items written for the BBC (though a few did appear in the house magazine, The Listener). Others have long been out of print. Mike Ashley, a renowned expert on Blackwood, has picked an excellent selection, offering insights onto several aspects of Blackwood's remarkable life.

It's hard to pick a stand-out item, but 'The Midnight Hour' is fascinating for the light it casts on the famous story 'The Empty House'. It seems that much of that tale is factual, in the sense that it derives from Blackwood's recollection of an investigation of a haunted house. I was amused to learn that, while in the story it's an audacious aunt who drags the narrator along on the adventure, in reality, his companion was a more timid and much younger lady. She tagged along with young-ish Algy because she regarded him as a prospective husband.

Blackwood's interest in mysticism and psychic powers appear in most stories, one way or another. 'The Fire Body' is an account of a woman who dreamed of the author, who took the role of a sage who taught her profundities she could never quite recall. The description of their first encounter (in everyday life) also mentions the tangled history of Johanna Southcott's box - an item so odd Blackwood's might have created it for a story.

Given his upbringing, it seems the imaginative young man had the choice of either rejecting the spiritual outright or embracing it as fully as he could. He chose the latter option. Mike Ashley's excellent introduction and story notes give us a lot of detail about Blackwood's unusual life. The son of wealthy parents who were also adherents of a narrow-minded sect. Thus the author recounts the visit of a preacher in the habit of accosting people with the question 'Are you saved?'. Young Algernon hid from this man as best he could.

Elsewhere, I was surprised to find that Blackwood was an arachnophobe. Why surprised? Well, I suppose I assumed that a man so well travelled in the wild parts of the earth - especially the tropics - would not be unduly scared of spiders. Silly of me, really. 'Along Came a Spider' is amusing, not least in its account of the author encountering a tarantula found by a roommate in a bunch of bananas. I suspect those who share Blackwood's aversion won't find it quite so funny.

Blackwood's preoccupation with other dimensions and the idea of 'higher space' feature in several essays. 'Passport to the Next Dimension' looks at the issue head on, so to speak. It's a mark of the man's charm and breadth of interests that he can move from speculation on the nature of space-time to discussions of fairies - though he might argue that one naturally leads to another. I was pleased to find him totally dismissive of the Cottingley affair, in part because Blackwood (rightly) regarded the conventional view of the Little People (wings, wands, etc) as a Victorian conceit. His view of these otherworldly beings seems to have been closer to that of Machen.

Overall, then, this is an excellent collection of occasional writings by one of the most gifted and charming authors of supernatural fiction. Anyone interested in learning more about Blackwood could do worse than start with his own words.