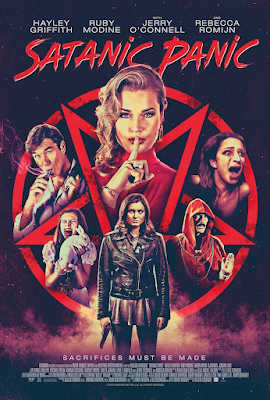 I never have great hopes of anything obscure that's available on Prime (the home of truly naff genre movies). But I keep trying and sometimes it pays off. Satanic Panic won only average reviews, but for me, it was a very pleasant surprise. The film is essentially what happens when the world of Dennis Wheatley collides with the tropes of American teen comedy horror. It's a bloody and often witty collision, with an intelligent but not too portentous take on the whole idea of devil worship and such.

The story begins with Sam (Hayley Griffith), a pizza delivery girl on her first day. She is somewhat annoyed when nobody tips her and so takes an unusually long ride on her Vespa to deliver a big order to a posh neighbourhood on the outskirts of town. Surely these rich people will be generous? Er, no. They didn't get to be wealthy by treating people nicely. Sam, annoyed by this, sneaks into the mansion and interrupts a gathering of the very rich and selfish, led by Danica (the excellent Rebecca Romijn, a pitch-perfect witch queen who is also a queen bitch).

The plot quickly develops. The Satanists need to make a sacrifice on this of all nights but their designated virgin has spoiled things. Danica's teen daughter Judy (Ruby Modine) bailed on them by having it away with the first bloke she can find. Someone asks Sam if she's a virgin and her reply - "That's a very personal question!" - convinces them that she is. She is grabbed and imprisoned with Danica's husband, who is in the coven's bad books for letting Judy do the wild thing. He explains that once the ritual gets underway, the virgin sacrifice will die bearing the demon Baphomet, one of the princes of Hell.

Sam, needless to say, is a bit alarmed by all this and manages to escape. There are some amusing and gory scenes as Sam flees to a neighbouring house only to discover that its residents are in on it. Meanwhile Danica uses some very grisly magic to trace Sam. Judy, the ex-sacrifice, is rescued and the two team up. We then discover why Sam is still 'pure' at the age of 22, and more wackiness ensues. Eventually, this being a horror film about Satanists, there is a Black Mass with the customary orgy, and Sam does indeed experience a very unnatural birth... 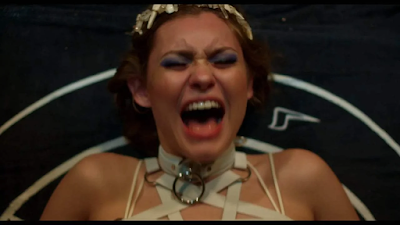 This film is smart in its use of horror movie tropes, and bits of occult lore that may (in some cases) be valid. Divination by human entrails may not be for everyone, but fans of M.R. James will recognize one of the entities that tries to nab Sam. There's also a spooky little girl playing hopscotch right at the start, and I just KNEW she'd turn out to be important... But no spoilers here.

Overall the film looks great, the script by Grady Hendrix is tight, and the performances are unfailingly good and often excellent. It's black comedy with dark forces, and some scenes are genuinely powerful. The film not only nods to the classics (most notably an episode of Kwaidan) but also to one of the oddest paranormal sensations of the 18th century. Not for the squeamish, perhaps,and certainly not for children. But if you don't mind body horror this is a satisfying watch. 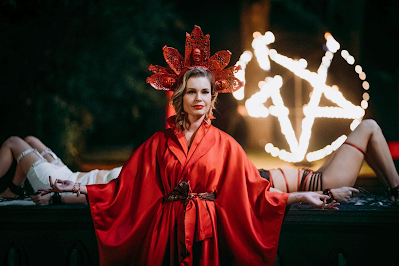