The Death Spancel and Others - Running Review Part 1

Having praised the cover, what of the book? Well, I'm around 50 pages into The Death Spancel and I'm enjoying it. As the collections contains a lot of quite short stories plus some poems, I thought I'd review it in sections rather than one tale at a time.

Sometimes I skip introductions, but in this case that would be foolish as Peter Bell offers his thoughts on the author, putting her in context and explaining why her ghost stories have remained unconnected until now. The late Richard Dalby was working on assembling Katherine Tynan's weird fiction but sadly died before he could bring the project to fruition. Finding her supernatural tales was not easy because they were originally published in periodicals, then assembled into collections long out of print.

Sometimes, of course, an obscure author is justly neglected. But in Katherine Tynan's case this is not the case. Her fiction is of a high standard, crafted in relatively simple yet still lyrical prose. Her stories draw upon Irish folk traditions and sometimes have a straight moral (she was a nationalist and a devout Catholic) but more often there is a sense of loss and/or wonder, very redolent of the Celtic Twilight. Her vignettes often concern women who are hard done by stand apart from the mainstream, and it's hard not to see the author revealing something of herself here.

The death of women in childbirth is a recurring theme in Victorian fiction and Tynan rings the changes on this powerful theme. It's easy to forget what a mixed blessing pregnancy was. Every woman knew that being in 'an interesting condition' could be a death sentence. Doctors did not wash their hands, there were no antibiotics, and there was no blood transfusion.

Thus in 'The First Wife' the eponymous ghost walks the house where her successor now reigns. The old family dog, miserable most of the time since the death of his beloved mistress, perks up and follows her, and the servants stay out of the way, hearing the swish of an unseen dress. This is one of those stories in which the ghost is not a menacing presence - everyone knows it is the spirit of a kindly woman. But it still inspires superstitious awe. The story is accompanied by Tynan's poem 'The Dead Mother', which is simple and moving.

The second story, 'The Sea's Dead', reminds us of another brutal fact about the 'good old days' - the way in which natural disasters such as storms could simply wipe out communities. In this case many of the men on an island of fishers perish. One leaves a wife he brought from outside - supposedly the mainland, but some suspect a stranger origin. The woman, fair of hair and eye, dies in her turn and the villagers, though not her friends, decide to keep vigil with the corpse as is the custom. But then a second storm rises, and the sea claims her.

The perennial theme of doomed or blighted love recurs in 'The Death Spancel', in which a designing woman uses a spell to snare herself an aristocrat promised to a virtuous young lady. All very old-fashioned, perhaps, but the plainness and brevity of the tale gives it force. Tynan is not one for flummery, and her lyrical style belies some deft and realistic characterisation.

Oh, what is a spancel? I looked it up - apparently it's 'a noosed rope with which to hobble an animal, esp. a horse or cow'. In the context of the story it is used to symbolic purpose, a form of sympathetic magic.

'The Ghosts' is another interesting story that slightly wrong-footed me. It begins with an account of a remote Irish community and the impact of a new railway. It moves on to ghosts that haunt the female narrator, and the sadness she felt when her cousin left to become a soldier. But then comes an odd coda, with the ghosts being declared far less bad than the fate of a woman in the grip of a man who will 'kiss you while your flesh creeps, and your whole soul cries out against it'.

It seems odd to say it, but the next story - 'A Bride from the Dead' - is ultimately a happier one. Here Tynan does a neat job of evoking the days of the bodysnatchers in the Dublin area. A young gentleman walking home from a party begs a lift from a passing coach. He is taken aboard on condition that he will speak on behalf of the driver and his companion if the 'new police' interfere. A young woman is  apparently asleep in the corner... Or is she?

'Miss Mary' is another tale of a wistful woman mourning the dead - though again, there's a twist. The lady of the title grows old pining over a ne'er do well she fell in love with, and who was banished by her father. Eventually he returns as a ghost - or so she believes. This is a wistful tale, and unusual in that it has a British setting. Perhaps, like Le Fanu before her, Tynan was encouraged by her publisher to try settings outside her homeland?

So far I haven't encountered a dud story in this collection. Katherine Tynan was a prolific author, but a very assured craftswoman of the supernatural tale. I'll have more thoughts on The Death Spancel and Others very soon. 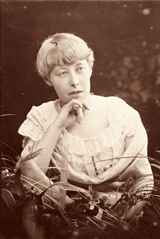 The term is still in fairly common use in rural Ireland - e.g. 'She has you well-spancelled so!' (ie, your wife won't let you go down to the pub for a drink with the lads etc).