- May 04, 2017
I love anthology horror movies, and I revere the great Richard Matheson. So surely a TV movie featuring not one but three Richard Matheson stories would be pretty damn good, huh?

First aired as an ABC Movie of the week in March, 1973, Trilogy of Terror is an object lesson in the strengths and weaknesses of its format. It was intended partly as a showcase for Karen Black, who stars in each segment as a different character. If you don't know who Karen Black is, this is who she is. She's the one in the foreground. Twice. The guy in the background is, well - more later. 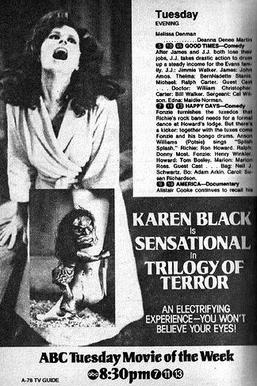 The first story, 'Julie', begins with Chad, a ghastly college student. Chad (Robert Burton, who acts like a barn door with a Beach Boys haircut) makes a bet with his equally ghastly and plastic pal that he can seduce their dowdy English lecturer. Karen Black plays dowdy yet sexy rather well, but Chad is so appalling that it unbalances the story a little. You can almost smell the sweaty nylon, he's so Seventies in all the worst ways. Anyhow Chad 'seduces' Julie by drugging her at the drive in, then taking lots of candid shots of her in a cheap motel room. Did I mention Chad is vile? But there's a twist, of course. Trouble is it's kind of obvious, and the ending seems rushed, almost perfunctory.

But oh dear me, the second story, 'Millicent and Therese' depends entirely on a twist ending that is so bad, so obvious, that it should never have been taken off the page. In a short story it might just work. On screen it's ludicrous. In brief, Karen Black puts on a different dowdy costume to play Millicent, the pious twin sister of Therese the brassy blonde trollop. Things reach a climax and the big reveal is, well, feeble. As with the first story, this was adapted by William F. Nolan, so we can't blame Matheson for the actual script.

Nor can we blame him entirely for the ludicrous third segment, 'Amelia'. Adapted by the author from his story 'Prey' it begins well as a one-hander with Karen Black in an apartment. She talks on the phone to her mother and, later, the emergency operator, but no other actors take part. Amelia has only recently moved out and started to live alone, and has acquired a boyfriend. She buys him a gift - a doll of a tribal warrior. The doll, she reads in the handy leaflet, has a gold chain around it to stop the soul of the warrior animating it.

Oh dear, there seems to have been a mishap and the doll is running around trying to stab poor Karen. The doll manages to be laughable and rather racist at the same time while Karen's response to a two foot high would-be assassin is not exactly Sigourney Weaver. She overacts the screaming, panicky female idiot. So racism and sexism and sheer idiocy do somewhat mar the tale. Mind you, the final scene is worth sitting through the entire film for. Trust me. The whole thing is on YouTube.

Oscar Solis said…
I saw this when it first came out. The first two were stories forgettable but that last one about the Zuni doll was just what the doctor ordered when you are a 13 year old horror film fan. I remember it was a big topic of conversation at school. I watched the Zuni doll episode again recently and it was still enjoyable. It does recall that famed episode of Twilight Zone where Agnes Moorhead is attacked by a little astronaut figure.