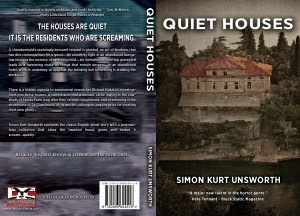 Shadows gathered around his feet and under the tables nearby, pools of dirty light through which the floor glimmered, the tiles ill-formed and murky. He looked again at the recorder, at the time counter rolling implacably onwards, and thought again of Amy and the way she had of making the world feel brighter, lighter. “Who would I tell?” asked Wisher again, and Nakata couldn't answer him. Instead, he asked another question.
One of the greatest British movies was Dead of Night, which famously employed the portmanteau format for supernatural stories. If you haven't seen it (what's wrong with you?) the basic premise is simple: man arrives at country house, meets bunch of nice people, but gets nagging sensation that he's 'been here before' – in a dream. Guests are prompted by this to tell supposedly true stories of ghostly encounters. The film ends rather cleverly with a plot twist that makes perfect sense but also comes as a genuine surprise.
The portmanteau movie is a clever way to exploit the traditional short story format, which is where the best supernatural fiction tends to thrive. Put another way, how many novel-length ghost stories can you name? The early Seventies saw a veritable rash of portmanteau movies – Tales from the Crypt, Dr Terror's House of Horrors, From Beyond the Grave – and every now and again the format is revived, as in The Eye 10 (2005).
Modern horror writers tend to fight shy of the portmanteau approach. This is odd given that two of the greats produced examples – Joseph Sheridan Le Fanu used his Dr Hesselius as a linking narrator while Algernon Blackwood achieved his first commercial success with the John Silence stories. John Llewellyn Probert has produced a couple of fine portmanteau collections in recent years. But it's arguable that the format is hard to pull of successfully because it combines novelistic elements with what must be strong short stories. Also, what sort of framing narrative do you use to link the various tales? You can't just have some psychic expert careering from one mystery to another. Well, you can, but it might be better to have a well-drawn central character whose motives are more complex than poking about in the ectoplasm.
And this brings me, finally, to Simon Kurt Unsworth's Quiet Houses. The framing narrative seems – at first – fairly straightforward. Richard Nakata, an academic at a northern university, places an advert in a newspaper asking members of the public for examples of real-life hauntings. He then winnows out the hoaxers, time-wasters and general dross to compile a very short list of phenomena he deems worth investigating. Thus the first part of the book is taken up with a series of uncanny tales, some more horrific than others, but all satisfyingly disturbing.
The first ghost Nakata investigates (though to be fair, this probe consists largely of interviewing a haunted man) is that of a mysterious woman who seems to be the spirit of a hotel chambermaid. If that sounds fairly innocuous, think again. The sad female spectre brings with her a pall of unbearable misery, infecting everything around her. This is redolent of the kind of ghosts found in late Victorian and early 20th century stories.
Perhaps it's not entirely a coincidence, then, that that the next haunting takes us into the Lovecraftian era, with an altogether more nightmarish account of a run-down bungalow where Something Lurks. That's followed by a tale set in a seaside hotel which has a more 'modern' feel, not least because of its strong sexual theme. Then we're in a public lavatory, which is better (or worse) than it sounds and offers a commentary on our country's hidden, or underground, histories. It is also – or so I would argue – a very modern setting, because it wouldn't have been used by anyone before about 1970.
Thus Simon Kurt Unsworth takes us through the eras of horror, and he does it in form as well as content. The first story follows the classic pattern of 'live' narrator telling his story to another man in a public place, the second is taken from a thoroughly Lovecraftian handwritten manuscript that survives its author, while the third tale has a standard third-person narrator. The fourth tale sees Nakata himself at the scene of the haunting, using ghost-hunting technology. And that in turn sets up the final story, in which a group of people investigate a farm with a grisly reputation.
Each tale of a 'quiet house' (one where everyday quietude means the sounds from elsewhere can be heard) is interspersed with linking narratives that gradually reveal more about Nakata's character and situation. He has suffered a great loss; he is under pressure to get results; his motives are more than purely academic. (The phrase 'tell it to the judge' sprang inevitably to my mind.) We discover that an earlier attempt to probe a haunting went horribly wrong when Nakata's colleague tried to achieve spectacular results by unethical means.
Along the way the author elaborates on various theories of the paranormal, with a respectful nod to Nigel Kneale's Stone Tape concept. But are ghosts mere recordings, imprinted on the structure of some buildings, or is there truly something of us that survives death? Well, if you want to know what Nakata discovers you'll have to read this excellent book. I suspect you won't be disappointed by the conclusion, but whether you'll feel comfortable is another matter.
Quiet Houses will be published by Dark Continents later this year. It can be pre-ordered from their website.
- August 31, 2011

Roger Corman's place in the history of cinema is assured by his prodigious output of low-budget genre films. He jumped on the horror ban...