The Conception of Terror: Tales Inspired by M.R. James - Vol. 1 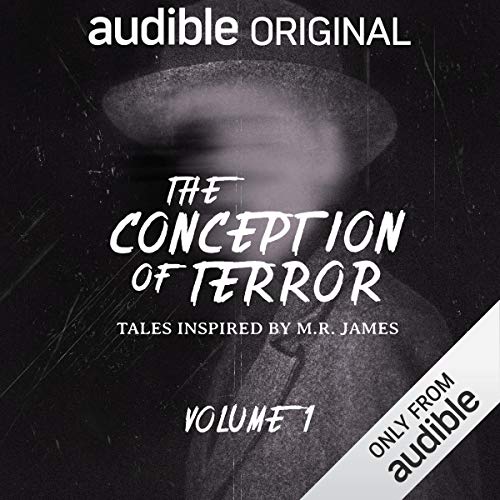 That's quite a title, isn't it? I must admit it threw me a bit, but I suppose it gets the job done. The point is that here we have Audible, a division of Amazon, muscling in on what was pretty much BBC Radio 4 territory with adaptations of stories by Monty James. I've downloaded and listened to the four audio dramas on my Kindle Fire (I'm not getting paid for all this product placement), and here's my take on this interesting development.


First up, you have four stories here, and the selection is itself interesting. First up, 'Casting the Runes' - well, no surprise there, it's a cracking idea and has been made into a film and a TV drama. Second is 'Lost Hearts', another well-known and much-anthologised work, and of course one of the classic BBC TV adaptations from the Seventies. Third is 'The Treasure of Abbot-Thomas' (yes, the hyphen is correct), for me one of the lesser tales, but again quite popular with readers. Fourth is 'A View from a Hill', which was adapted for television a few years ago but is not so widely admired as the other three, if polling by Ghosts & Scholars readers is to be believed.

Each story is about an hour long, and the cast for each one is pretty impressive. For me 'Casting the Runes' is the best of the bunch, not least thanks to Stephen Gallagher's excellent script. As with all four stories the drama has a modern setting. Jo Harrington (Anna Maxwell Martin) is the hapless academic who peer reviews a paper by Anton Karswell (Reece Shearsmith), and incurs his wrath thanks to a neat plot device unavailable to M.R. James. Edward Dunning is Jo's partner, and it is he who spots a poster on the Tube that concludes with 'three days were allowed'.

This one works well because the characters are credible and the pace never lets up. There are sufficient twists to keep the listener guessing as to what will happen next, but the story does not deviate too far from the original - well, it didn't for me, anyway. The conclusion is arguably stronger than the one Monty himself provided, with Karswell suffering a deservedly unpleasant fate.

In 'Lost Hearts' we journey with troubled teenager Stephanie Elliot (Rosa Coduri) to Aswarby House, a quasi-Utopian community presided over by the charismatic Mr Abney (Jeff Rawle), Stephanie is adopted by the amiable Mrs Bunch (Susan Jameson). Things begin well when Stephanie makes friends with Ben (Bill Milner), who is Abney's adopted son. But then Stephanie sees the ghost of a pale girl with a wound over her heart...

Here, again, writer A.K. Benedict has followed the original plot quite closely. The 'psychic portions' of the child victims are not easy to depict in audio, but the cast do an excellent job of conveying a gathering sense of something going seriously awry. There is a Seventies vibe about Aswarby, as its denizens resemble the 'Happy Day' villagers in 'Children of the Stones'. Again, the ending is significantly different, and I suspect listeners will be divided over how well it works.

'The Treasure of Abbot-Thomas' focuses on Somerton school, where Mika Chantry (Pearl Mackie, recently seen as Bill in Doctor Who) has just been appointed a history teacher. She meets a former pupil called Greg Parsbury (Robert Bathurst), who asks for Mika's help. Greg has received a postcard from his old history master, Mr Abbot-Thomas. What makes this odd is that Abbot-Thomas has just been buried.

It emerges that the strange, charismatic teacher made a big thing of an annual treasure hunt, which he seemed to regard as the most important test of a boy's character he could impose. Gteg is convinced that there was a genuine treasure, and Mika - after initial scepticism - joins his quest. However, Abbot-Thomas is not quite so inert as they had assumed, and the treasure has a guardian. This one, scripted by Jonathan Barnes, was absorbing and at times extremely eerie. I did feel some aspects of the plot were a mite predictable, particularly the scandal that engulfs the school around the middle of the play. But, overall, it makes for an entertaining listen.

Finally, I listened to 'A View from a Hill'. I think the script, by Mark Morris, deviates most drastically from the source material. The central characters are Paul (Andy Nyman) and his wife Sarah (Alice Lowe), who take a Cotswold holiday after the accidental death of their son. While out walking they spot a beautiful abbey across the valley, but when they reach it they find nothing but ruins. Sarah thinks she hears children's laughter and believes something follows them back to their hotel.

Here the ingredients of M.R. James' story have been employed in a story with a very different tone. The problem is that the nature of the supernatural phenomena is a bit hit-and-miss, with suggestions of a 'good' ghost one minute and horrific apparitions the next. I have to admit my attention wandered a little with this one, despite the efforts of an excellent cast.

So, three hits and one (possible) miss. That's not a bad average. If Audible produce more adaptations I will probably give them a listen.
Posted by valdemar at 17:56