To correct the correction - I have been deluged with submissions this past week and now have more than enough material for the next four issues of ST. Therefore I have decided to close ST to submissions for the foreseeable future. Thank you and goodnight.
Posted by valdemar at 22:16 No comments:

Slight correction to my previous post on this subject. ST will be open to submissions until the end of January. That is all - thanks very much.
Posted by valdemar at 21:17 No comments:

This rarity is based on two stories, one by A.M. Burrage, the other by Ambrose Bierce. It's a fine two-hander with Rosalie Crutchley and Peter Vaughan, who also starred in a famous BBC adaptation of 'A Warning to the Curious'. See what you think.
Posted by valdemar at 20:34 2 comments:

Adam Golaski's story 'Translation' will feature in ST21. In the meantime, here's Adam reading to a (fairly) attentive audience. It's not a complete reading, but the narrative is nonetheless self-contained. You can click straight to part 2 of the video at the end of part 1.

Arthur Machen is a revered but not widely read author. He wrote far more than his contemporary M.R. James, for instance, but his stories are not so frequently anthologised and you won't find popular paperback editions of Machen's work. This is a pity, because although Machen can be heavy going he is a fascinating author.

One problem is that Machen had a long career, and over time his style and general approach to fiction. His early work falls into the Decadent tradition of the late Victorian era. His short novel The Great God Pan is a horror story with hints of strange miscegenation. Greatly admired by HP Lovecraft and Stephen King, among many others, it is not exactly packed with drama, but instead relies on allusion and second-hand accounts of some very bizarre and disturbing events.

Machen toned down the Decadence a bit but remained a very unusual and at times contentious writer. His most accessible work is collected in Tales of Horror and the Supernatural, which has appeared in various editions. Tartarus Press does a mobi-for-Kindle version here. Oh, and it was Machen that popularised the idea (in fiction) that the Holy Grail might still be around, thus paving the way for such literary masterpieces as... Well, you know. Dan Brown and stuff. Anyway, the point of this post is that Cardinal Cox (Peterborough's Living National Treasure) has produced Codex Nodens, a pamphlet of poems dedicated to Machen's mythos and offering some intriguing, not to say witty insights into the great man's ideas. So we have Celticism, strange doings, suggestions of weird sexitude, references to eltritch primordial races in these isles, and a ton of other stuff. As well as poems, Pete Cox contributes a wonderful vignette that captures the essence of Machenesque horror, especially the sense of something unutterably strange that we are always about to glimpse, but never see.

Handily, one of Cox's poems, 'Transmutations', sums up Machen's appeal rather better than I could: 'A person who reverts to protoplasmic gel/Ancient hidden races, secret of the ages...' And then we get the kicker, for me: 'Everything you thought you knew turns out to be lie/Life is but a house of cards kept up from within...' Machen was the original conspiracy theorist of popular fiction. My favourite story of his, 'The Inmost Light', is all about a shady cabal trying to acquire the result of a horrible experiment.

Machen's conspirators are sometimes human, and almost always deadly. But there can be conspiracies of light, albeit accidental: Machen's best known story to this day is a slight propaganda piece thrown off in a frenzy of wartime journalism. 'The Bowmen' almost certainly gave rise to the Angel of Mons legend in 1914, and in the poem 'No Sleep, No Sleep, No Sleep' the poet tellingly evokes the trench conditions that can make grown men believe in the impossible.

Other poems refer to The Great God Pan, faerie lore, Grail or Graal legends, and The Hill of Dreams, often considered Machen's finest novel. Several poems manage, like Machen's prose, to re-imbue the supposedly tame British countryside with a sense of mystery. Along the way, informative footnotes reveal some interesting facts. I didn't know that for the true adept the rituals of the Grail 'could work with a lightly boiled egg whose top had been removed'. Not sure if toastie soldiers are involved.

In a handwritten note accompanying my review copy, Cardinal Cox writes: 'One day (not soon) might do a Codex Silenci (on Algernon Blackwood) or Codex Carnacki (on Hope Hodgson).' Always leave 'em wanting more, eh?

58 Pennington
Orton Goldhay
Peterborough
PE2 5RB
You can also email the Cardinal at cardinalcox1@yahoo.co.uk
Posted by valdemar at 21:24 5 comments:

An Interview with Reggie Oliver


Insights into the actor and playwright who has written several acclaimed collections of stories, the latest of which is Mrs Midnight. Reggie is also the nephew of Stella Gibbons, author of Cold Comfort farm, and she's one of many fascinating authors mentioned in this ramble through his library. Also, for fans of the feline, there's a guest appearance by an authorial cat.
Posted by valdemar at 21:36 2 comments:

If you're a fan of cheesy, low-budget horror films from the last century (and who is not, pray?) then you could do worse than mosey over to the cinema blog of author J.L. Probert. His fiction has appeared all over the place, even in ST, and he's clearly a lover of all things absurd and a bit loopy. His blog consists of enthusiastic and erudite opinion on films that, in many cases, were forgotten almost before they were released. His latest review is of Frogs (1972) of which I have vague but fond memories. It's not strictly supernatural, but then it makes no real sense anyway. Here's a sample of John's review:

FROGS is buckets of fun. Most of the deaths involve a degree of intelligence and planning not commonly encountered in simple vertebrates. A murder in a greenhouse requires the lizards in question to not just knock over bottles of chemicals but to presumably be able to read the labels on the jars so they know which bottles to smash so the contents mix to produce a lethal gas.

Posted by valdemar at 16:44 No comments:

Rather a good review from Mario Guslandi here. I'm glad that - as usual - the mix of stories means that the discerning reader can always find at least one or two absorbing tales. Diversity is strength, I feel, and I often worry that my own tastes as an editor might be too narrow. Still, you've got to call it like you see it, and all that.
Posted by valdemar at 22:38 No comments:

I own a Kindle, and use it fairly regularly. Not every day, but most days. I realise some people loathe electronic books but hating them won't make them go away (believe me, I've tried it with politicians and rap music). And for those who do like eBooks, there are a lot of interesting items out there in the realms of supernatural fiction.

Ash-Tree Press recently started making some of its older titles (and some newer ones) available for electronic download. If you check out the page I think you'll find it an interesting and reasonably-priced selection. Among them are such classics as Nine Ghosts by RH Malden, Intruders by AM Burrage, and Randalls Round by Eleanor Scott. There are also three collections by the legendary HR Wakefield.

Among modern writers, there's a treat for lovers of traditional ghostly tales in Steve Duffy's first collection, The Night Comes On. I enjoyed this tremendously when it came out back in 1998. Here's the blurboid:

'Standing between the niches, like sentinels over the treasure-trove of Death, were thirteen fully articulated skeletons, clothed in monks’ habits and armed with long scythes.'

Mr Metfield is astounded to discover this tableau in the crypt of the church of St Joseph, in the small French town of Vazart-les-Bains. His arrival in the town coincides with the annual enactment of the Danse Macabre, or Dance of Death, wherein thirteen monks from the abbey don skeleton costumes and proceed through the streets. When Mr Metfield returns to the crypt, however, he is horrified to find that only twelve skeletons remain. Where is the thirteenth? And how many figures are taking part in the Dance of Death in the streets outside?

In ‘The Ossuary’ and fifteen other stories in this new collection, Steve Duffy evokes the Golden Age of the ghost story with practised ease. Set mainly in the period between the Wars, the stories in The Night Comes On are consciously ‘Jamesian’ in style and setting. They feature libraries and academics and great old country houses, colleges and branch railway-stations and cathedrals; and, of course, any number of things less easily defined, which lie in wait for the foolish, the unwary, or the unlucky. The protagonists come through their adventures alive—though not always. And while they may be more or less intact in physical terms, they usually have a new insight into things for which they once had little time and less respect.

A nice story before bedtime

The series Late Night Stories was first broadcast in 1978, during Baker's tenure as Doctor Who (a second series employed Sir John Mills as reader). The idea was to offer grown-ups bedtime stories - hence the disturbing opening graphics, which would give smaller children the heebie-jeebies.

This tale is borderline supernatural, and comes from Nigel Kneale's collection Tomato Cain and Other Stories (1949). It's based on a real incident - Kneale's brother was taken to be photographed while seriously ill. You can also find Tom Baker reading Saki's 'Sredni Vashtar' on YouTube, but several other stories from the series have not been uploaded.
Posted by valdemar at 18:50 3 comments:

Oscar Wilde's comedy ghost story features a wealthy American family who move into an English country house and find that it is haunted by the spectre of a long-dead nobleman. However, the ghost's efforts to terrorise the new residents prove fruitless, as they refuse to take him seriously. Quite a sentimental story in its way, 'The Canterville Ghost' has been dramatised for radio, TV and film. It's often considered suitable holiday fare. 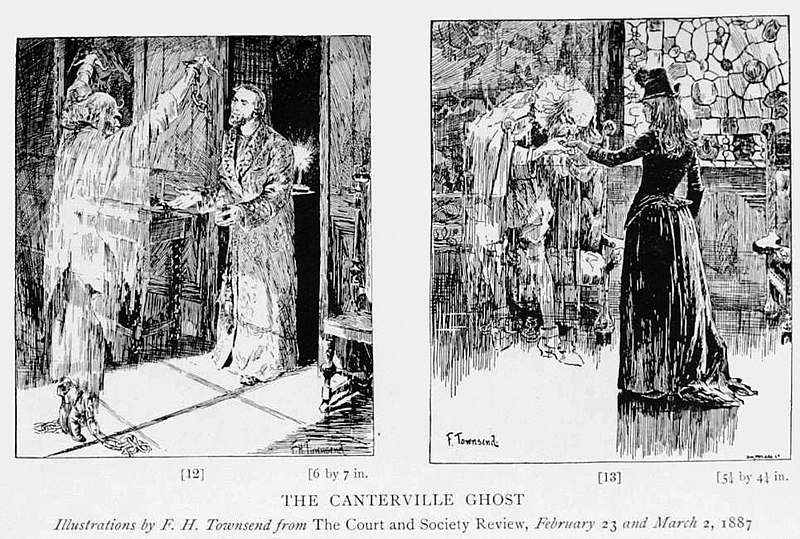 The1987 version of the story features no less a figure than Sir John Gielgud as Sir Simon Canterville, and a very young Alyssa Milano (later to achieve fame in the supernatural semi-soap opera Charmed). Note that in this adaptation the family's reaction to the ghost is made a bit more realistic i.e. they are a lot more discomfited than Wilde's Americans.

Posted by valdemar at 10:21 No comments:

Supernatural Tales is open to submissions from now until the end of February. Amaze me.

Wishing a spooky 2012 to all my readers. All three of you. Or thereabouts.