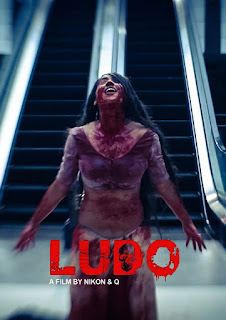 My exploration of Indian horror films continues with this very bloody (and often sexy) Bangla movie. Bangla means set in West Bengal, where the city of Kolkata (formerly Calcutta) is considered India's cultural capital. I was certainly startled by Ludo, as it is a lot grittier than the Hindi horror films and TV shows I've become used to over the last year or so. It's also a film that combines some conventional horror tropes with a fantasy element that I suspect some will feel undermines the claustrophobic mood the director creates so well.

Ludo was written and co-directed with Nikon by Quashiq Mukherjee. I will certainly be seeking out more of his work. The film begins in familiar fashion with two young couples getting together for a night out in Kolkata. They are notably working class, not the pale-skinned, rich, and beautiful types who populate typical Bollywood movies. Instead these teens zoom around on scooters, drink hooch, and are fairly Western in their attitudes to sex.

Sex, in fact, proves their downfall. After losing almost all their cash to sleazy, corrupt cops (another thing I've never seen in a Hindi production) the four try to find a cheap hotel for a bit of nookie. They are turned away on moral grounds over and over, until eventually they find themselves in a run-down establishment where the desk clerk appears to be deaf. Despite reservations they follow him upstairs, where they glimpse strange figures and hear an odd rattling sound. Scared, they run for it. One of them knocks over a jar on the stairs - a small glass container of blood.

This is the first brush with the weird and our sexed-up kids try to forget about it. One of the girls suggests sneaking into a shopping mall, waiting for it to close, and then having their fun. So, again, we find our team in a fairly familiar setting. But then a strange elderly couple arrive just as one pair are getting down and dirty. Confrontation is followed by compromise when the old lady produces a folded leather board and suggests a game of Ludo.

Yes, they play the game Americans called Parcheesi, one normally used to keep kids quiet on rainy days. Ludo is a British coinage from the Latin 'I play'. But the original game is, I've since learned, very old, and it does indeed have its origins in Asia.

This particular game does not go well. Suddenly the eccentric old couple become a terrifying threat as one young man is taken down in a Grand Guignol manner. The other teens try to escape, and a bit of hide-and-seek results. Eventually, though, all must play to the end. Nobody gets to turn over the board and flounce off. It's Ludo, but not as we know it.

The basic plot device here is that the old couple are vampires of a sort and rejuvenate themselves by consuming the blood of the young. So far, so commonplace, though the violence is well-handled. What makes Ludo odd is the way that, after the half-way mark, the lead vampire embarks on a huge expository narrative that involves a lot of flashbacks. We learn how the old/young couple came to be cursed, and discover the mystical truth about the game. And we also discover that not everyone loses the game.

Ludo gets poor online ratings, and judging by IMDb this is partly down to Indian viewers disliking the violence, swearing (kids today say 'fuck' a lot whatever continent they're on, it seems) and the historical fantasy element. Western critics also disliked it, by and large, with many seeing a wasted opportunity. So I'm in a clear minority in finding Ludo rather good for all its flaws. It is particularly interesting because the female characters are shown to be generally stronger and wiser than the men, both in the past and present. One bloke instantly starts blaming their collective ill-fortune on the girls who he condemns as 'whores'.

Ludo is also visually impressive, with some scenes showing just how lazy a lot of horror directors are when it comes to evoking a sense of mystery to go with the terror. And I have rarely seen anyone spell out just what being cursed with unholy appetites means in practical terms. There is some fine acting here if you can just see past the blood and ignore the pop/rock soundtrack, which is one definite downside of the movie.

If you could stomach the Japanese classic Audition or the 2008 French film Martyrs, you can probably stomach this. Ludo is at the upper end of my gore tolerance, but sometimes you have to push the boundaries to find out just where they are.