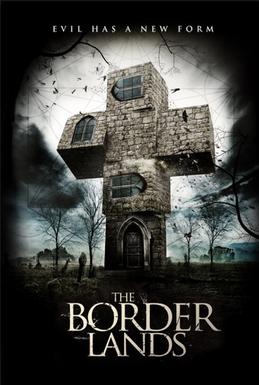 Found footage. What does that mean to you? To me it often means, 'Oh, come on, they'd have dropped the bloody camera by now.' Not that found footage horror isn't bad, but it has - just like old-school Gothic horror or sci-fi - generated quite a few lousy movies. What's worse, though, is it's produced a lot of forgettable movies that are okay, pass the time, but are nothing special. I have seen almost all of these, or feel that I have.

Fortunately, The Borderlands is something special. According to DVD Extra interviews, Metrodome gave writer-director Elliot Goldner the task of producing a good found footage horror movie with a fairly traditional setting and plot. He delivered a tale that draws on the classic ghost story tradition while having a very contemporary feel.

The film begins with Brazilian police investigating a church in the company of Deacon, a Vatican investigator charged with debunking alleged miracles. Something very unpleasant has happened (or is happening). Then we cut to Deacon's meeting with Gray (Robin Hill), a techie type who is setting up cameras in a country cottage. They are two-thirds of a team from 'the Congregation', tasked with probing alleged miracles at a re-opened Catholic church with a charismatic priest. The leader, Mark (Aidan McArdle), is a rigid sceptic and most resistant to all suggestions of the paranormal.

Deacon is played by Gordon Kennedy, best known for his role in the sketch comedy show Absolutely. He makes the transition to horror movie acting with great aplomb, playing Deacon as a believable 'whisky priest' tormented by what we eventually learn was a horrific disaster in Belem. Gray - as we learn early on - is not quite the chirpy, regular bloke he seems. But in this persona he gets some of the best lines, among them 'Dan Brown was right about you lot!' and (when they fail to obtain directions from a taciturn local) 'Good luck with Edward Woodward!'. This is not comedy-horror, but it acknowledges the comic potential in horror, with a knowing wink at silly TV shows of the Ghostwatch variety.

The logical basis for the found footage approach is rock solid here. Everything has to be documented, so not only are the cottage and the church covered by cameras and mics, the three investigators wear headcams. This allows repeated cutting between points of view. A well-crafted panoply of strange events can be seen fairly clearly, and from odd angles, in a location setting that is superbly atmospheric. (The entire film was made on location and this gives a genuine documentary feel to even the most outlandish events.)

One problem with any horror film is whether the shocks and chills are orchestrated effectively. In this case the gradual accumulation of detail, ideas, and incident is very effective. Church records reveal that a Victorian priest seems to have gone insane before the church was closed down. The locals are far from friendly (and one of them gets punched in the face). A Black Dog plays a minor but ominous role. There is a shocking violent death, after which a Vatican expert is called in to try and quell an ancient evil. There is a final, all-too-logical twist.