Tartarus Press sent me an e-book of this novel to review. I'm glad they did, as it's a brilliant work of American Gothic supernatural horror.

Muladona is set in the small east Texas town of Incarnation in 1918. The Great War is coming to an end and the Spanish Flu epidemic is taking hold. Widespread disruption leaves the narrator, 13-year-old Verge Strömberg, to fend for himself at home in a town where people are dying like flies. Then he receives word that a terrifying creature from Mexican/Indian folkore is coming to kill him and drag him to Hell. According to folklore the Muladona is a fire-breathing winged mule by night and transforms into an ordinary (but sinful) woman by day.

If that sounds improbable, Carlson makes it very believable by presenting us with a world in which the supernatural intertwines with the everyday. If I had to categorise Muladona I'd put it somewhere between Ray Bradbury and Mark Twain, with a distinct touch of Rod Serling and a dash of Ambrose Bierce. It's world is that of often cruel life in the deserts on the southern frontier of the US at a time when bigotry against 'natives' and Mexicans was not merely tolerated but respectable.

It's also a magical world in which young Verge, confined to bed for much of his life, enjoys the works of Victorian authors like Stevenson, Verne, and Wells. He also hears the tales of the people of Incarnation, an old gold-mining town recolonised by a group of fiercely Protestant Swedes, led by his Verge's overbearing grandfather. There's a compelling, prolonged clash between the earthy but humane values of the locals and the austere, hypocritical ways of the incomers that proves central to the story.

As well as a strong central narrative, this is also a story about telling stories. Verge finds a way to protect himself from the Muladona for a while by hiding under the bed sheets (sound familiar?), but the creature torments him, night after night, by telling him scary stories. These tales become ever more disturbing and personal as his allotted time runs out and he must do the one thing that will defeat the monster - guess it's true name.

The stories within the novel are all first-rate, and show the author's great versatility. One particularly impressive tale is a neat variation on 'The Venus of Ile' by Merimee. Another is a futuristic story of science misused to control 'naughty' children that's truly nightmarish. All explore the themes of exploitation and violence that underpin the creation of American society, and it's interesting that (without giving too much away) Carlson here rejects the American dream in its narrow 'Trumpian' sense.

None of which conveys the essential quality of the book, which is not a thesis or a lecture. It is more of a boy's fever-dream recollected in old age by a man who has lived life to the full. We know Verge survives, albeit with scars, because this is his first-person recollection. Yet the Muladona is still far more menacing than most horror monsters, and the revelation of its true identity is deeply shocking but artistically right.

Eric Stener Carlson is a new writer to me, but on the strength of this book I'd say he was a first-rate author of supernatural fiction. He mines deep in the old tradition, but makes something rich and new, and his prose is admirably clear. I'll be seeking out more of his work. 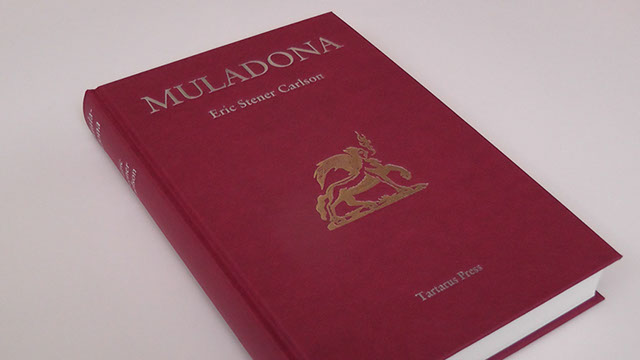