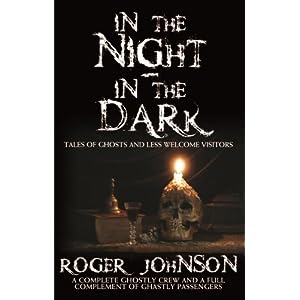 I've just received a review copy of the splendid new pb collection of stories (and poems) by Roger Johnson. It's available from MX Publishing. The price is £13.99.

I've met Roger a few times and had the pleasure of hearing him read 'A Vignette' in the church at Great Livermere, when we were among the M.R. James enthusiasts attending the dedication of a plaque to the great ghost story writer.

There are many good ghost story writers, I'm glad to say, but I think Roger has been rather overlooked as a worthy successor and disciple of James. There's a balance of erudition, humour, action and characterisation in a first-rate ghost story. The fact that an editor as distinguished as the late Karl Edward Wagner chose three of Roger's stories for anthologies tells you how good they are.

I ought to add that Roger Johnson is emphatically not an M.R. James pastiche-merchant. There's a whole section of stories here that are very much in the tradition of Lovecraft and other 'weird' authors, including - surprisingly enough - Oscar Wilde. What's more, Roger excels in the very short story of a few telling pages, making this an ideal book to dip into.

In this volume you'll find all the stories that appeared in the 2001 Sarob Press collection A Ghostly Crew, plus many extra tales. There's also the humorous saga of John R. Hero (an idiot whose paranormal investigations are really handled by his lovely assistant), and the aforementioned poems.

So, that's my autumn reading sorted, more or less. I will of course post a review here in due course, and include it in the next issue of the magazine.