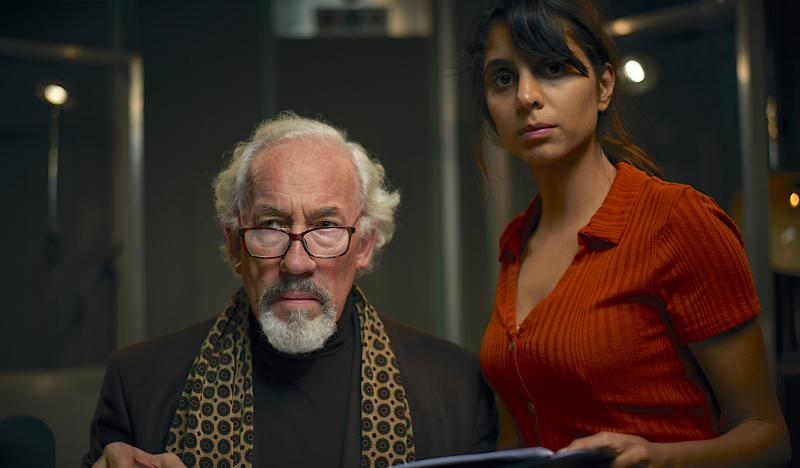 'The Dead Room', Mark Gatiss' first original TV ghost story for Christmas, deserves to be the first of many. Yes, I would love to see more M.R. James adaptations. I would love to see an anthology of classic tales, with dramas based on works by Benson, Burrage, Le Fanu, Wakefield, all the usual suspects. But, as the nearest writer we have to a modern Nigel Kneale, I feel Gatiss should be given the freedom to create new stuff, while nodding respectfully to the Old Guard. Because 'The Dead Room' offered the best of both worlds - a new, modern ghostly tale that has the structure and feel of a classic.

The BBC clearly threw the usual handful of loose change at the production, as it traditionally does with horror and suchlike, but this was turned to excellent effect. Everything took place in a few rooms, an old radio studio where Simon Callow's fruity luvvie, Aubrey Judd, is recording a distressingly modern ghost story. His contempt for a tale in which the ghosts are linked to video games - 'Ready Player Death!'- prompts discussion with his producer Tara, played by Anjii Mohindra. Perhaps it's the nerd in me, but simply hearing Callow say 'The Wendigo' on national television feels like a victory for the good guys.

Mark Gatiss' love of the traditional ghost story is evident from a script that name checks classic stories and authors. Callow's character quotes M.R. James when talking about the 'slight haze of distance' necessary to give a story the right sense of timelessness. But the haze central to the ghost story here is that of the long, hot summer of 1976, which many of us older folk remember very well. Gatiss himself makes a sneak appearance as a radio announcer, reminding a generation of the year when there was a minister for drought (Denis Howell). And in that incredible, blazing summer, the young Aubrey found love, albeit one that soon gave way to panic, anger - and to a terrible, long-delayed reunion.

The script offered a few red herrings while building up the tension. I particularly liked the device of a reader suddenly finding that the story in front of him has changed, and has become all too personal. When the ghost finally appeared it was sufficiently traditional to satisfy poor old Aubrey, but it's doubtful if he had time to ponder that. Callow did an excellent job of creating a character that remained sympathetic to the end, even when we know he is going to be the victim of rather Jamesian wild justice.

The only problem was entirely down to my faulty brain. I didn't recognise Susan Penhaligon, one of the faces of the Seventies if you were a Brit and into horror, sci-fi, or low-budget movies in which a U--boat battles dinosaurs (seriously). Now is the time for me to outside and have an accident with the old shotgun. To be fair, Ms Penhaligon was in a non-speaking role (as sound effect person in a radio studio) but I still should have spotted her. Oh well.
Posted by valdemar at 16:44