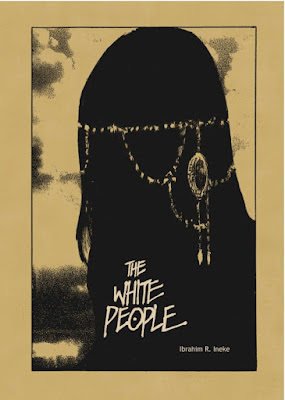 I am the lucky recipient of not one but two review copies of weird graphic tales by Ibrahim R. Ineke. I'll be reviewing the longer book, Eloise, in a few days. But first a re-imagining of Arthur Machen's 1904 classic 'The White People'. If you haven't read it, go and do so now.

Done that? Okay, as you probably know 'The White People' is held by many to be one of the best pieces of weird fiction in English. It's a short, superficially simple story. In a framing narrative two erudite gentlemen discuss the nature of evil. One argues that true evil is a pure as true goodness, and thus has an innocent quality. To support his case he produces a journal written by an unknown child which details her induction and training in a nameless cult.  The contrast between the simple, childish language and what is being done to her is deeply disturbing.

The story is not an obvious candidate for any of the visual arts.It depends on the reader trying to imagine what the child means by 'Aklo letters', 'Dhols' and 'Voolas'. Ineke has avoided the trap of trying to draw the unimaginable by updating and 're-imagining' the story. Now there are two children playing in the woods. They are engaged in a kind of fantasy game, and Lovecraft is invoked. Then  one of them accidentally stumbles into a 'real' world of strange, paranormal forces and beings. Visually the book is intensely stark, many of the drawings recalling underground comics of the Sixties and Seventies. But it also veers into weird sumptuousness at key points. The overall effect is one of disorienting weirdness that does indeed recall Machen's Decadent phase.

In an interesting introduction Amelia Ishmael explains the basis of Ineke's remarkable technique, and also discusses the way Machen's story might still be relevant. She makes a startling but (to me) valid link to The White March, which took place in Belgium in 1996. It was a protest against the failure of the authorities to protect a number of young girls from the serial killer Marc Dutroux, a very human monster.

That said, one can read many things into Machen's story, and therefore into Ineke's excellent reworking. The nature of evil, and the way in which childhood innocence can be so easily exploited by it, is one of the great themes in fiction. This book is a worthy addition to the canon of the weird tale, and a seriously good read. And yes, The White People do appear in a sense, and do not disappoint. Cities (entwined with verdant jungles) that Were old before inhabitants took them Now blind intra-cosmic polyps are sat In the crystalline c...