There are, appropriately enough, two different types of story about doubles, about doppelgangers.

The first type is probably best exemplified by The Body Snatchers by Jack Finney. The doubles are the famous ‘pod-people’ – not actually people at all, their resemblance to those they copy only skin-deep. A scary and a brilliant metaphor for paranoia and the enemy-within, but largely an external threat.

An example of the second is The Double by Jose Saramago. In this story, the central character (with the singular name, ha ha, of Tertuliano Maximo Afonso) sees an actor in a film who looks exactly like him... or exactly like he did five years ago, when the film was made. Further investigation of other films the actor has been in shows that throughout their lives the two men have always looked identical – the resemblance even including such things as both of them growing a moustache at the same time. The threat posed to Tertuliano by his double is not physical, but existential – he becomes preoccupied about who out of the two of them was born first; who was the original and who the copy. He tracks his double down, and eventually they meet and… well, that would be telling.

Saramago’s style might initially seem off putting – he writes in long sections with very few paragraph breaks, even for conversations between two characters. There are digressions, playful postmodern asides, and a 'character’ called ‘common sense’ who Tertuliano gets into long, bickering arguments with before he does something stupid. It's like a short story by Borges expanded to novel-length by Beckett’s repetition and detours, with a dash of Monty Python.

But, once the prose gets under your skin (and the translator must take some credit for this) you find it has a rhythm and a beat all of its own. It becomes a pleasure to read and there’s some genuinely funny moments. But this lightness of touch doesn’t quite disguise the creepy nature of the tale Saramago is telling. It’s like someone determinedly laughing and joking when they tell you of some bad experience they’ve had - it doesn’t quite ring true and the fact they are smiling as they tell you makes it all the more unnerving. Tertuliano’s double is still out there.

Towards the end of the book the pace picks up, as the consequences of Tertuliano's meeting his double play out – there’s some surprises and a certain tragic inevitability about events, before a final twist that even the second time reading the book I didn’t spot coming (in my defence it was years after I first read it).

There’s more than a few doubles in my stories in Falling Over, and both the title story and New Boy were deliberate attempts to deal with the theme. In both, the doppelgangers appear to be external ones like Finney’s body snatchers, but I also wanted the central characters to experience some of the existential unease and uncertainty of Tertuliano Maximo Afonso. In a sense, they both move from the first type of double story to the second.

The Double is a truly remarkable book, one that some people out there appear to hate. Whether this is to do with Saramago’s writing style or something else I’m not certain. From my perspective all I can say is I think those people are missing something great, a book and an author truly like no other (Saramago won the Nobel Prize in 1998). I don’t think his is a name who is mentioned in terms of horror fiction very often and indeed any connection must be considered tangential. But in the same way that the term ‘weird fiction’ can be stretched to include Kafka, it can be stretched some more to include Saramago.


Falling Over is published by Infinity Plus and is out now. Ten stories of unease, fear and the weird.


"Good writing gives off fumes, the sort that induce dark visions, and Everington’s elegant, sophisticated prose is a potent brew. Imbibe at your own risk." - Robert Dunbar, author of The Pines and Martyrs & Monsters.


Find out more at Scattershot Writing. 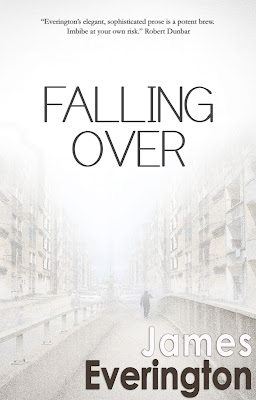 'Echoes from the Past' by Graham Smith

Another story from Terror Tales of the Scottish Lowlands , and one written in the present tense. This one has all the classic ingredients of...