Of a book and its cover

The unexpected arrival of a beautiful book is always pleasant. In this case I know the book's contents will live up to its cover. Or rather, covers. Selected Stories by Mark Valentine, newly published by Swan River Press, has a rather splendid blue and gold dust-jacket, but beneath it we find this: 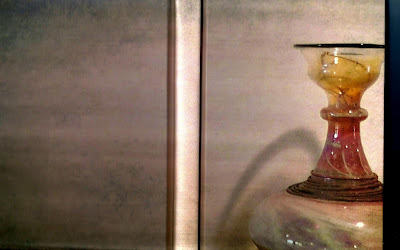 A slightly inept scan, but you get the picture, so to speak.

A much cleverer person would see this beautiful, antique oil lamp as an apt metaphor - one that illuminates the stories gathered in this volume. According to the flyleaf, these stories 'are about individuals caught up in the endings of old empires - and of what comes next'.

This is familiar territory for Valentine, one of the most intellectually accomplished authors of what is loosely termed weird fiction. I've long admired his work. Many authors have tackled the decline into chaos of Europe, once dubbed the mighty continent by someone or other (probably a Frenchman), now apparently far gone in stagnation and riven by internal dissent. In literary terms decay, uncertainty and failure are more interesting than rip-roaring success, unless of course the latter ends in some terrible disillusion. The power fantasies of politicians and the crazier revelations of prophets are more goal-orientated, of course. And then there are the artists, poets, visionaries, charlatans... I look forward to meeting them all in in these stories.

The titles - rather wondrous in themselves - are as follows:

A mascaron is 'a decorative element in the form of a sculpted face or head of a human being or an animal'. Wonderful thing, the internet. Not all change is for the worse.