The Lulu-produced emergency backup copy of ST17 is here, and it looks okay. I'm going to spend an evening or two looking through it carefully, but at the moment I see a pretty good product. The cover is fine - Stephen Clark's artwork looks excellent. It's far better than anything I've put out before.

A quick recap for the totally uninterested. ST started out as a cheap and cheerful chapbook, i.e. stapled booklet. It was easy for any high street printer to produce. But there's an upper limit to the size of such a magazine, and this did tend to squeeze out longer stories and indeed any substantial non-fiction. Also, it was remarked - by no less than Stephen Jones, editor extraordinaire- that ST looked like a parish magazine.

So I moved to perfect bound, i.e. bog-standard paperback format. This meant more pages, therefore more spiffing stories, but also a higher price simply because of that binding. It was (ahem) somewhat challenging for me to try to do ST's cover design, and while a few good examples were produced, I have to say it's been a bit inconsistent.

Now we enter the digital age and I find myself quick taken with the Lulu system simply because it means I don't have to engage in spirit-sapping exchanges with printers who don't seem to be that interested in doing a job. It's a bit more expensive - again - but I think a price hike in ST is something most readers will put up with if the result is a magazine that looks respectable alongside their other stuff.

What say you, good people? 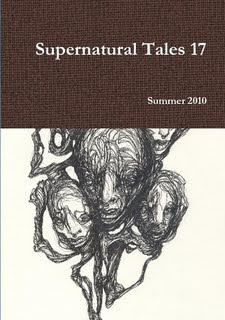 Thornavis said…
I'm looking forward to the next issue, I don't think it's expensive and it would have to be a big rise to stop me subscribing, I have to have some simple pleasures in my drab life !
14 April 2010 at 20:35:00 GMT